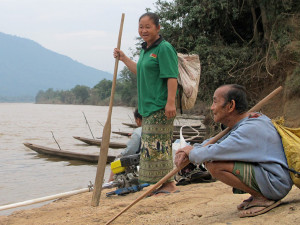 The Mekong River is home to more than 850 species of fishes, produces the largest freshwater fishery in the world, and supports 60 million people who depend on the river for food and income. As part of our program in international conservation and research, FISHBIO is working in central Lao PDR to assess the species diversity, biology, and nutritional and economic value of the Mekong’s fishery resources. Local villagers have collected much of the data for this project through a participatory approach.

We initiated the project through conversations with government resource managers, NGOs, and fisher committees active in Lao PDR’s Bolikhamxay Province. These groups requested quantitative data on the amount and economic value of fish caught, sold, and consumed in four villages on the Nam Kading River near the Nam Kading National Protected Area. While gathering this information, we also collected important baseline data on fish species composition, relative abundance, length-weight ratios, and migration timing.  We presented our preliminary results and described our participatory approach at the 2012 World Fisheries Congress in Edinburgh, Scotland. Results from the fish-catch monitoring survey have been published in Marine and Freshwater Research.

Documenting Diversity in Fisheries of the Nam Kading River

Wildlife on the menu

Fish on a rope

The measure of a fish