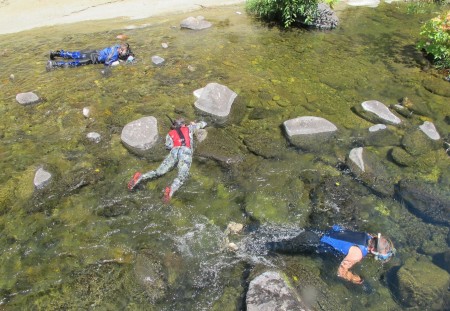 Big Chico Creek is a northern Central Valley stream that supports populations of both steelhead and resident rainbow trout. In August 2013, FISHBIO completed the first survey of the Big Chico Creek watershed in more than a decade to catalogue the abundance of trout and other fishes. We surveyed the entire 4.5-mile reach of the creek within the boundaries of the Big Chico Creek Ecological Reserve (BCCER, a 4,000-acre tract of land owned and managed by the CSU Chico Research Foundation) on foot, and mapped and categorized the creek habitat. We also conducted snorkel surveys to observe fish, and estimated more than 2,500 rainbow trout/steelhead (Oncorhynchus mykiss) to inhabit the creek within the reserve boundaries, in addition to nearly 200 (nonnative) brown trout (Salmo trutta). Other native fishes observed include Sacramento suckers, riffle sculpin, and California roach. However, Sacramento pikeminnow and hardhead, two large, native cyprinid species, were conspicuously absent from the creek – perhaps a lingering effect of a rotenone treatment by the California Department of Fish and Wildlife nearly 30 years ago.

Trends in the abundance and size structure of these species can be documented through continued monitoring of Big Chico Creek. This is possibly the only recent study that attempts to quantify actual summertime abundance of rainbow trout in an eastside tributary of the Sacramento River. The relatively high density of O. mykiss estimated in this study, and the observation of an adult steelhead, are a testament to the importance of Big Chico Creek and the BCCER to the conservation and recovery of Central Valley steelhead. FISHBIO repeated this survey in 2014 and 2019. Final reports of the fish population surveys can be downloaded below.