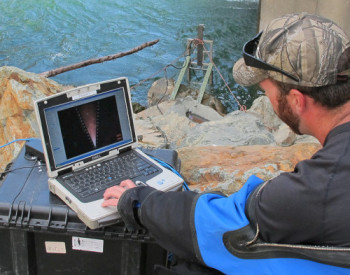 Dual-frequency Identification Sonar (DIDSON) cameras use sound waves to record images in turbid water with low visibility conditions. FISHBIO used a DIDSON camera to evaluate anadromous fish behavior in relation to hydropower operations in a Central Valley river. FISHBIO crews performed a reconnaissance survey to determine potential locations to install the DIDSON, constructed an adjustable mount to reposition the camera in response to changing water levels, and installed the DIDSON on the edge of a cliff. We conducted monitoring during the peak of Chinook salmon and rainbow/steelhead trout upstream migration and observed water discharges ranging from 300 to 1,600 cubic feet per second. We then combined behavioral data from the DIDSON footage with flow information to investigate whether changes in flow were associated with fish presence or absence and with changes in fish behavior.