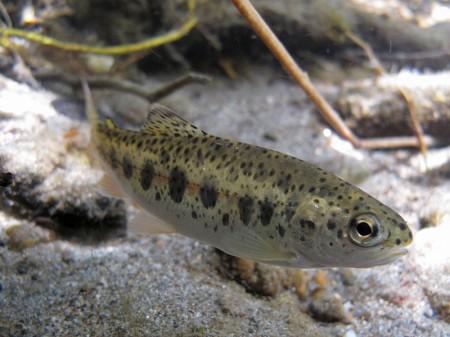 The species Oncorhynchus mykiss has two distinct life strategies: a resident form known as rainbow trout, which spends its entire life in freshwater, and an anadromous form known as steelhead, which migrates and spends part of its life in the ocean. The species can also show some variation between these two extremes, and it is still unclear what triggers migration in steelhead. Nearly all of California’s steelhead populations are classified as threatened or endangered under the Endangered Species Act. To better understand O. mykiss behavior at different stages of its life history, FISHBIO conducted a survey of migration rates and survival on the Calaveras River, which is designated as critical habitat for California steelhead.

We captured juvenile O. mykiss using rotary screw traps and seines, then surgically implanted 23 mm half-duplex PIT tags, which give each fish a unique electronic identification number. Seven solar-powered antennas installed over an 18-mile stretch of river continuously recorded fish PIT tag detections for three years. Our results indicate that steelhead migrated toward the ocean primarily during winter high-flow events, including rain-driven freshets. All O. mykiss encountered during regular spring monitoring of rotary screw traps on the river continue to be scanned for PIT tags using handheld readers. This allows us to estimate growth rates and movement patterns of recaptured O. mykiss, and helps ensure that that fish counts at the trap are accurate. We have recaptured a small fraction of PIT-tagged O. mykiss individuals several times in the trap for up to several weeks after they were tagged, which gives us valuable information on the short-term fate of those particular fish. It indicates that those fish didn’t necessarily emigrate to the ocean during the spring, but instead remained in the stream. Although we’re uncertain whether these fish ultimately did migrate to the ocean or stayed in the river, similar behaviors have been noted in coastal populations of O. mykiss on California’s central coast, which underscores the complexity of this unique fish’s life history.