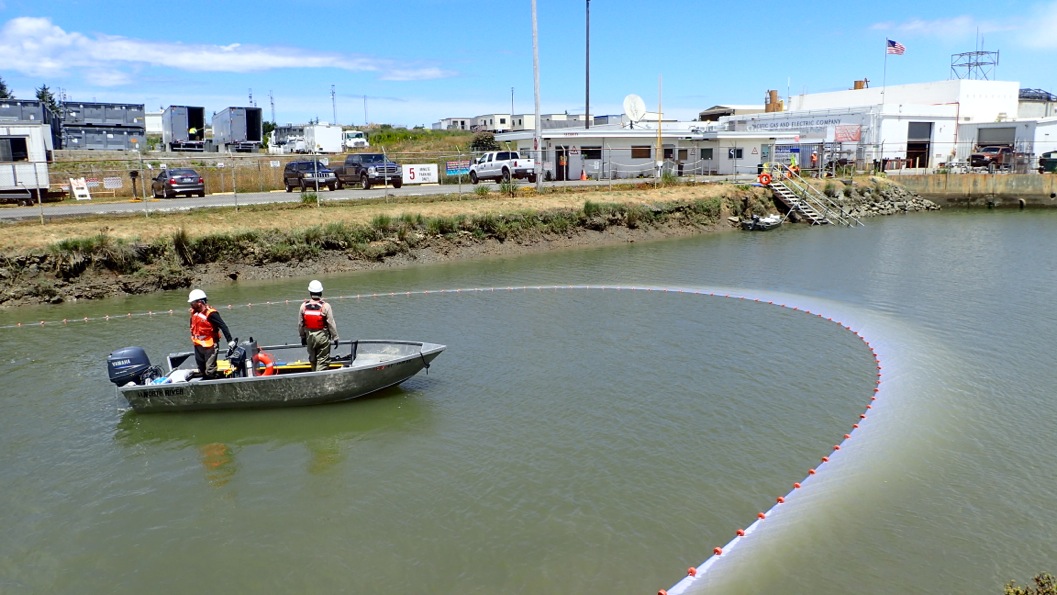 The largest fish rescue and relocation project that FISHBIO has ever undertaken was located in a tidal canal associated with the Humboldt Bay Power  Plant in Northern California. During the first of two project phases of the power plant decomissioning, FISHBIO crews performed multiple sweeps with a large seine net and installed a temporary block net to prevent fish from re-entering the canal. The project area measured approximately one acre in size with a depth of up to 14 feet, depending on the tide. Due to the site dimensions, a very large net (170 by 16 ft.) was needed to sweep the area on the outgoing tide, which herded fish out of the site prior to construction activities. After each slow sweep of the net, it was attached to a cable strung across the canal, secured to the bottom with sandbags, and floated with the aid of buoys to prevent fish from reentering the project area.

During the second phase, construction crews isolated the canal from tidal action and then slowly lowered the water level so FISHBIO staff could more easily capture and relocate remaining fish and crustaceans. FISHBIO closely monitored the dewatering effort to ensure water quality stayed adequate for the remaining fish. Once the water level was sufficiently lowered, crews performed numerous sweeps with beach seines over a period of several days. Biologists examined each fish captured to determine if any sensitive species were present at the site. After capture and a quick examination, fish and various crustaceans were transported to the release location, where FISHBIO helped construct a release chute with seawater pumped from the canal to efficiently transport fish into the non-impacted area of the canal. In total, FISHBIO rescued and relocated more than 5,000 fish and countless crustaceans from the project location, which included 20 different marine and estuarine fish species.