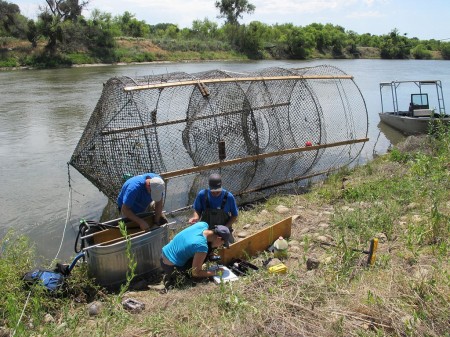 While considerable research on striped bass in California has focused on their population in the Sacramento River, less is known about how and when these predators use the San Joaquin River and its tributaries as habitat. After noticing striped bass passing through the Stanislaus River weir in the spring, FISHBIO decided to conduct a feasibility study to test whether fyke traps could be used to estimate the population of striped bass in the San Joaquin River during the spring, similar to fyke trap surveys conducted by the Department of Fish and Wildlife (DFW) in the Sacramento River. The goals of the study were to evaluate trap catch rates and trap deployment locations.

FISHBIO fabrication experts constructed two 10-foot-diameter fyke traps, similar in design to the traps DFW has used in the Sacramento River for decades. We fished the traps for 24-hour periods over the course of three weeks, and checked them each morning. In addition to striped bass, the traps caught American shad, largemouth bass, white catfish, and suckers. All healthy striped bass of legal size were tagged with PIT tags and external disc tags. The PIT tags will last the life of the fish, and in the future, it could be possible to monitor individual striped bass moving into the river’s tributaries using PIT tag antennas attached to weirs throughout the basin. 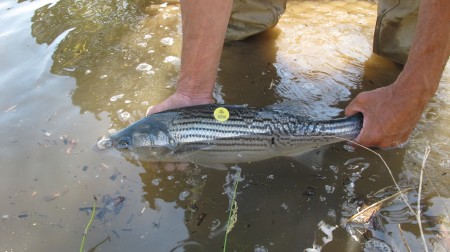 The results of this pilot study demonstrate the successful use of fyke traps to capture and release healthy striped bass in the mainstem of the San Joaquin River. Anglers have reported re-capturing at least four tagged fish (9% of the fish that were tagged); however, no tagged fish were recaptured in fyke traps during the pilot. Therefore, increased effort would be needed (either in the form of more traps or a longer sampling period) to conduct a successful mark-recapture study. The mark-recapture of striped bass would not only be useful for counting individual fish in the San Joaquin Basin, but the sampling could also provide a platform for other valuable research on striped bass movements, such as using PIT and acoustic telemetry technologies. Telemetry studies conducted on striped bass in their native East Coast habitat indicate distinct subpopulations vary considerably in their seasonal migration patterns, ranging from “resident” to “migratory/anadromous,” and also show seasonal site fidelity. A final report on the pilot study findings is available to download here.