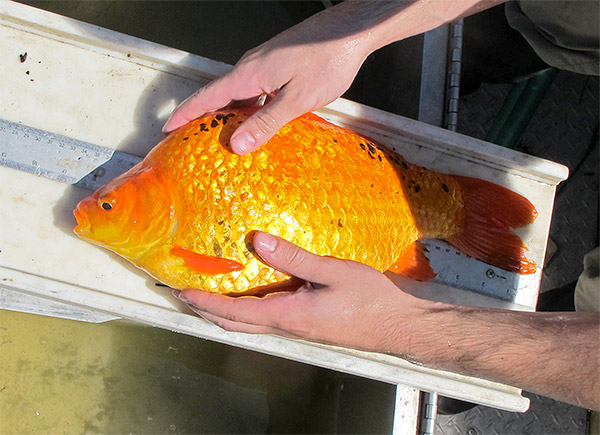 All the world’s a fishbowl for an aquarium fish set free. As anyone whose pet fish has defied the odds can attest, aquarium fish are bred to be hardy survivors. Unfortunately, this trait makes it easier for the onetime pets to thrive in an unfamiliar place if their well-meaning owners decide to turn them loose. As an example, gargantuan goldfish pulled from the depths of Lake Tahoe captured public fascination earlier this year. Goldfish (Carassius auratus) are now found in most of California’s freshwater habitats, largely as a result of pet releases. Freed from the cramped confines of a fishbowl, goldfish may grow to well over a foot (40 cm) in length in the wild (McGinnis 2006). We at FISHBIO have netted a few massive specimens, like the one shown above, during a survey of Alameda Lake in Santa Clara County.

Although bright and unusual additions to the fish community, goldfish fortunately have not exerted significant damage on native species or habitats compared to other introduced fishes (McGinnis 2006). However, some ornamental species with voracious appetites have a dangerous potential to invade and alter new environments. Researchers at UC Davis released a report earlier this year that found 9 ornamental marine species have successfully colonized California waters. The list includes snails, worms, and crustaceans, but no fish as yet. However, with as many as 179 marine species passing through San Francisco in a single day for the aquarium trade, researchers are on alert for the escape of highly invasive fish species, such as the lion fish that has infested Caribbean waters largely unchecked. The phenomenon is a global problem: introduced ornamental fishes now swim through waters around the world, including the Mekong River (see The Mekong’s Amazon exotics). 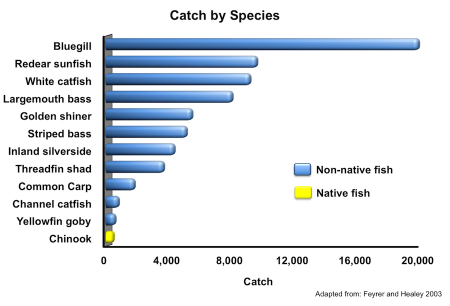