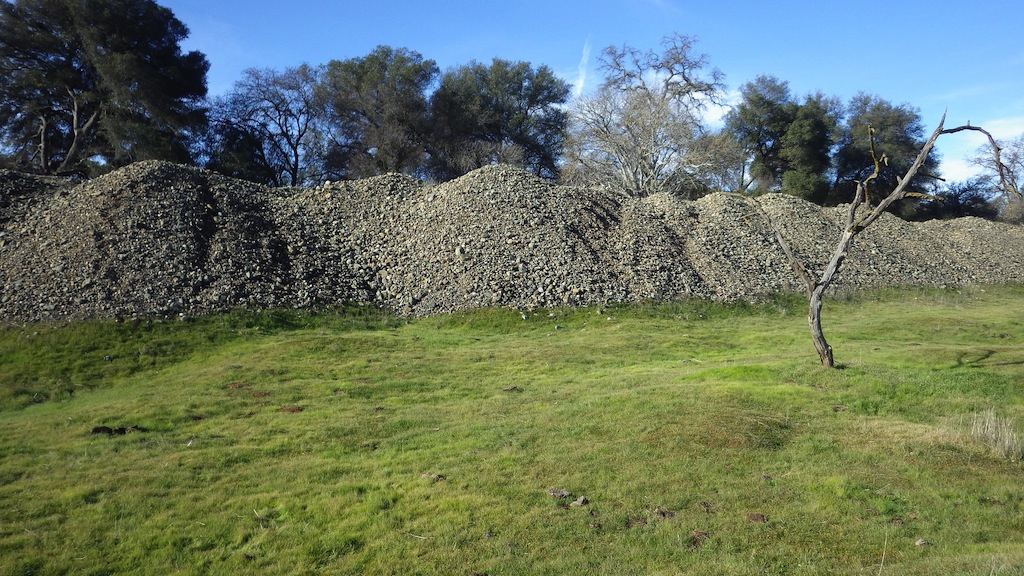 The California Gold Rush inspired westward expansion, California’s eventual statehood, the establishment of a transcontinental railroad, and even the development of California’s first fish hatcheries. But this boom also impacted the state’s rivers, waterways, and agriculture – and we are still feeling the effects today. After the initial discovery of gold at Sutter’s Mill in 1848, California’s population swelled from 160,000 to more than 1.5 million in just over 50 years. The burgeoning population created a labor force that permitted industrialization, and hydraulic mining quickly became the most common method to extract gold. Hydraulic miners used a hose to direct a stream of high-pressure water at terraces and canyon walls, allowing access to gold terrace gravels embedded there. The loosened sediments were then washed over a set of riffles constructed out of bedrock, called sluices, which filtered out the gold. Hydraulic mining had relatively low labor costs and allowed much faster processing than older panning methods – but it also required large quantities of water.

Farmers, faced with the ruin of their lands, took matters into their own hands and built levees to prevent flooding. Unfortunately, the levees often created more trouble than they solved – they channeled the floodwaters, which flowed at higher velocities, and they overwhelmed smaller and weaker levees. Each farmer had to continuously build higher and stronger levees to outpace the efforts of their neighbors, and to attempt to keep the floodwaters off their farmlands. Things got so bad that landowners were occasionally caught sabotaging levees their neighbors had built in order to protect their own land. In the early 1880s, farmers brought lawsuits against hydraulic mining that eventually led to the courts’ decision to declare it a public nuisance, and the U.S. Army Corps of Engineers became involved with flood management in California. But the effects of hydraulic mining are long lasting. The artificial channeling of rivers destroyed seasonal and riparian wetlands, which provided habitat for native fish and wildlife. Floods became rampant, and the high-pressure hoses destroyed entire hillsides and old-growth forests. Denuded slopes and hillsides became destabilized and prone to landslides.

After hydraulic mining was banned, dredging became a more common prospecting method. Dredging allowed miners to access gold that had been washed into the flood plains and distributed in river sediments from hydraulic mining. These floating factories on California’s waterways consisted of a set of buckets at one end to dig up sediment, sediment sorters, sieves, and screens in the center to process it, and a crane at the other end to distribute the waste. The dredges destroyed wide expanses of prime farmland in the delta, wrecked spawning beds for salmon and other fish, and left behind huge piles of mine tailings, remnants of which are still visible today, like in the photo above.

The majority of gold mined in the late 1800s and early 1900s was removed through hardrock mines, which were developed when miners discovered that gold was associated with veins of quartz that ran through parts of the Sierra Nevada range. These mines accounted for about 60 percent of the gold production in the Sierra Foothills. Steam-powered drills and dynamite were used to tunnel through the quartz and bring the ore to the surface, where it was chemically treated with mercury to free the gold. The mercury contaminated the soil, groundwater, rivers, and lakes, where it made its way into the food web, contaminating fish. The mercury contamination was so severe that scientists believe it will remain in the environment for another 10,000 years (Singer et al. 2013).

Most of California’s mining operations were closed when the United States entered World War II in 1941, and low gold prices after the war (due to government-enacted price controls) prevented their reopening. Some mines reopened when price controls were lifted in the 1970s and ‘80s, but most gold mines in California remain closed today. They leave behind a legacy of destruction that is still visible in the Delta’s water challenges. Hopefully, greater environmental awareness in California will prevent mines from reopening if gold mining becomes lucrative again. By remembering the environmental legacy of the California gold rush, we can avoid repeating our predecessors’ mistakes.