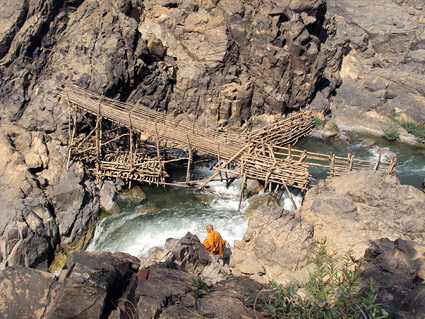 This fish trap on the Mekong River of southern Laos is strategically located at some rapids that the locals call “Spirit Trap” Falls. Most Lao people will not enter the water here because they believe that the spirits of dead people and animals get trapped here, and perhaps the monk in the photo is praying for them. The fishermen must have struck a deal with the spirits, as they brave the rapids to construct and operate these large fish traps built from thin branches, bamboo, and rocks. The V-shaped portion crosses the upstream width of the channel, funneling fish up onto the ramp in the center. Fishermen then carefully climb out onto the ramp to collect the fish. This photo was taken in the dry season, but in the rainy season it’s estimated that one of these traps can catch about half a ton of fish per day. Fish are a vital source of nutrition for Lao villagers, which is why FISHBIO is working with fishermen to study the importance of fisheries for livelihoods along with the biology and ecology of the Nam Kading River in central Laos.