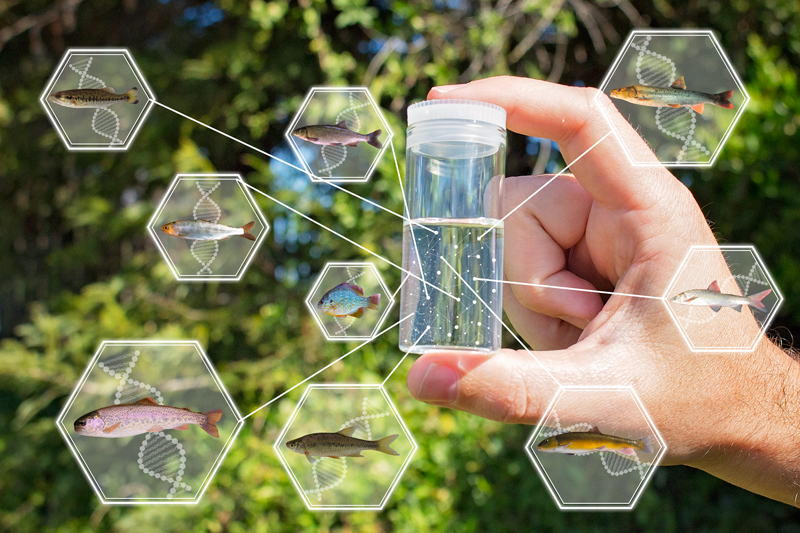 Humans shed tens of thousands of skin cells every hour, leaving behind traces of their presence everywhere they go. Contained in each of these cells is an individual’s entire set of DNA, or even multiple copies of it (in the case of mitochondrial DNA). Fish and other organisms are no different, and scientists have begun to explore ways to sample the environment to find these often elusive clues of a species’ presence in the form of “environmental DNA,” or “eDNA.” There are numerous pathways for cells and genetic material to enter the environment as eDNA, including natural sloughing of skin, intestinal lining excreted with feces, tissue separated from the body by injury, cells released into the water during reproduction, decomposition of dead organisms, and even in waste from predatory species if an organism was consumed. As long as the DNA contained in these cells persists in the environment, scientists have an opportunity to detect the genetic signature unique to each species.

The rapid advances in eDNA research over the past decade have brought about an array of novel applications to explore questions that were previously unanswerable. In aquatic environments, eDNA can offer clues regarding the presence and distribution of species that are otherwise very difficult to detect, whether due to their elusive behavior, low abundance, or low capture probability with other methods. As such, eDNA methods have been widely used in freshwater and marine environments to address questions pertinent to the study and management of fishes, invertebrates, and plants. For example, eDNA can be used to map the distribution of rare species (Olson et al. 2012; Laramie et al. 2015) and provide early detection of invasive species, which is particularly important to the success of early control measures (Vander Zanden et al. 2010). In addition, eDNA studies also provide a way to sample species richness and map biodiversity (Thomsen et al. 2012a, Thomsen et al. 2012b).

While the approaches to different aquatic research uses for eDNA differ, the same underlying principles apply. All organisms release some quantity of DNA into the water, which begins to degrade fairly rapidly and breaks apart into smaller and smaller segments. Scientists filter a relatively small quantity of this diverse soup of DNA fragments using specialized technology, and transport the filter containing the eDNA sample to the laboratory – all the while taking extreme precautions to avoid contaminating the samples with other DNA, including their own. Next, DNA fragments need to be amplified (multiplied) through a process called polymerase chain reaction (PCR) to increase the chances of detecting particular fragments of interest in the sample. This can occur in one of two ways: amplification can be species specific, wherein the chemical reagents contain a “template” (primer) of the target species’ DNA, so successful amplification indicates the species’ presence. Alternately, generic primers can be used to amplify DNA fragments of a whole group of species, which are then sequenced and processed through a reference database to find matches and generate a species composition list for the sample. An astonishing multitude of research questions can be addressed by analyzing some seemingly unremarkable water samples; however, this technology is also subject to an array of difficulties and challenges, which we’ll cover in an upcoming Fish Report. Until then, if you go swimming and take a gulp of water, just imagine the assortment of biological evidence in your mouth, and think of all the traces you leave behind!