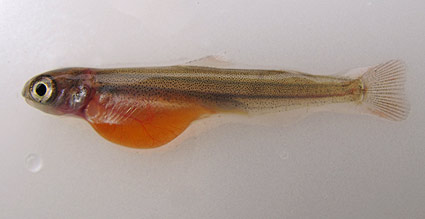 At this time of year we occasionally come across chinook alevin (or sac-fry) in our juvenile salmon outmigration monitoring, which typically runs from December to June. As mentioned in a recent post Halloween Treats, an alevin is a salmon that has broken free from the soft shell of the egg, but still retains a nutrient-rich yolk sac (shown in the photo above). The yolk sac provides nourishment to the alevin during its first 2-3 weeks after hatching. Usually, during this stage they will remain in the gravel, but occasionally strong currents wash them out. Once the yolk sac is absorbed they are often referred to as a ‘buttoned up’ fry because of the visible seam that remains on their ventral side. As fry, the tiny chinook salmon (30-50 mm) become silvery, and begin to swim and feed.