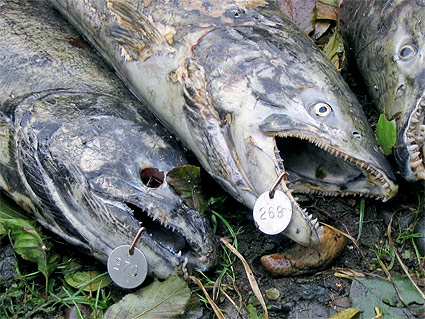 Have you ever wondered what the term salmon “escapement” means? To some it may be counterintuitive, but the “escapement” is actually the number of salmon that ‘escape’ all the perils of their ocean journey (e.g. fishermen, orcas, sea lions) and return to spawn in a river. For salmon species, such as Chinook, that die after spawning, escapement can be estimated by counting the number of salmon carcasses found in the spawning grounds. In California, carcass surveys are the dominant method for estimating escapement. Typically surveys are conducted weekly by floating downriver or walking the banks of the spawning reach. Rather than just counting the salmon carcasses, the process involves a mark and recapture technique (much like a study of live fish). Carcasses are marked with jaw tags and released in the same location where they were found. Recovered carcasses that were previously marked are chopped in half with a machete so that they will no longer be counted. Biologists often collect additional data, such as length, gender, condition (stage of decay), origin (hatchery or wild), scale samples and heads with Coded-wire-tags (CWT) or otoliths (ear bone) for later analysis. While conducting drift surveys biologist may also record the number of live salmon and redds observed.

Carcass survey objectives are typically to estimate escapement, grilse to adult composition, hatchery to wild proportion, male to female ratios, and spawning success. Three statistical models have been used by the Department of Fish and Game (DFG) to estimate escapement using carcass tag-and-recovery data: Petersen, Schaefer and Jolly-Seber. There is substantial disagreement regarding which is the best model to use among the fisheries managers responsible for estimating escapement in California. Models tend to either overestimate or underestimate escapement depending on the number of carcasses recovered and the robustness of the salmon run. Read more on the advantages of a fish counting weir over traditional carcass surveys in our post Dead or Alive.