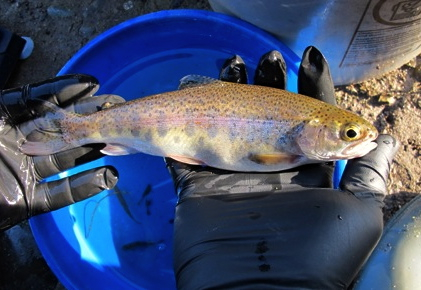 Our pudgy buddy here illustrates the benefits of being an opportunistic feeder. As wise fishermen know, trout often aggressively pursue whatever prey is readily available at the moment. Although rainbow trout and steelhead usually feed on aquatic and terrestrial invertebrates, they also prey on fish eggs and other small fish. When trout swim in the same streams as salmon, as they often do in the West, the trout are rewarded twofold. They first gorge themselves on salmon eggs during spawning in the fall (see 50 seconds into this video), then gobble up emerging alevins and salmon fry a few months later. During this time of year, it’s not uncommon for us to catch trout that have stuffed themselves full of salmon fry. Switching prey with the season sure pays big—this fish’s belly may drag a little as it swims off.