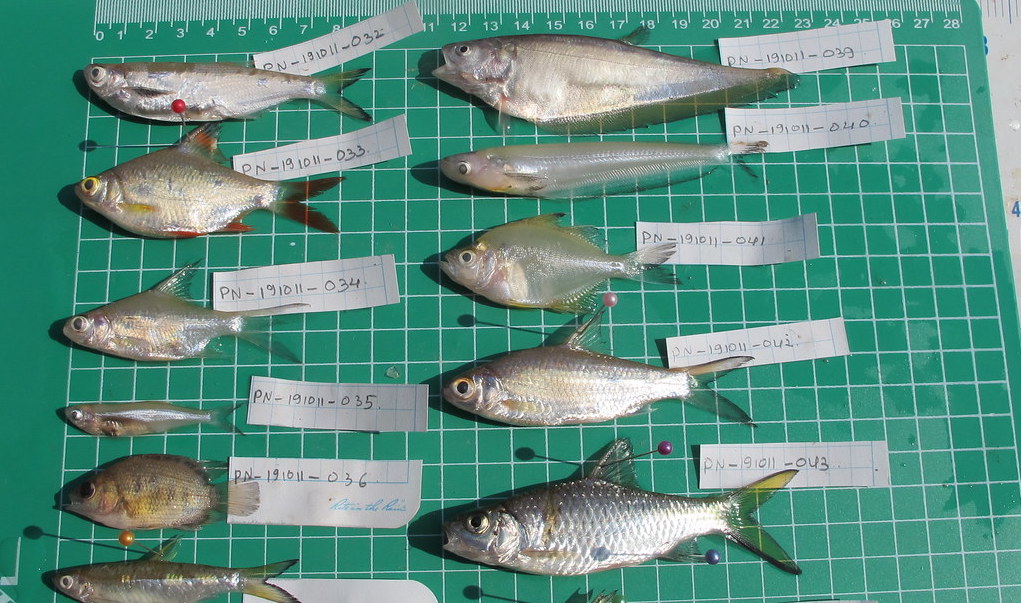 Earth is a blue planet, with less than a third of its surface rising above the oceans that dominate the globe. However, of all the water bathing our world, only about 2% is free of salt. Flowing in streams, filling lakes, and locked away in ice, this minimal amount of freshwater represents a measly 0.01% of all the available aquatic habitat. In spite of this, a remarkable 40% of all fish species live in freshwater. Scientists have spent more than a century puzzling over the mystery of high freshwater fish diversity — in fact, fish were the first group of animals for which patterns of past biodiversity were systematically documented (see Louis Agassiz’s 1843 book Reserches sur les Poissons fossils) Now, the relatively recent advent of genetic tools has provided new insights into these patterns.

Using data from genetic analyses and the fossil record, researchers studying the class of fish called the Actinopterygii have made several interesting findings (Vega and Wiens 2012). Actinopterygii, which means “ray-finned” fishes, is a class that includes 96% of fish species and roughly half of all vertebrates on the planet. Because Class Actinopterygii is evenly represented in both marine and freshwater environments (14,740 and 15,150 species, respectively as of 2012, according to FishBase), it is a useful class to study to understand why freshwater fish are so diverse. Scientific models indicate that the common ancestor of all today’s Actinopterygiians lived in freshwater around 300 million years ago, suggesting that all marine members of this group originally came from a freshwater ancestor. Researcher findings also suggest that today’s marine Actinopterygiians are mostly the result of relatively recent speciation events (the formation of new species), while today’s freshwater Actinopterygiians are a mix of descendants of recent speciation events (such as minnows and catfishes), a few ancient lineages (such as gar), and a few lineages that have moved back to freshwater from marine systems (such as cichlids). Given that both marine and freshwater Actinopterygiians diversified relatively recently, why isn’t the much larger ocean leading to much more speciation than the tiny realm of freshwater?

A separate group of researchers tackled this question by dialing in on a group of fishes called the silversides. Focusing on a subfamily of silversides, these scientists used genetics to determine that the species in freshwater experienced net diversification (the rate of speciation minus the rate of extinction) at a rate 1.2 times that of their marine counterparts. They hypothesize that this is the result of freshwater systems (particularly streams) having much more habitat complexity and more frequent disturbances. The majority of the ocean is simply open water, whereas fish face many more barriers to movement in a river. Populations in streams can much more easily become isolated from one another, and over time this isolation will lead to populations following separate evolutionary trajectories and becoming different species. Because most ocean habitats are much more connected with one another (coral reefs being a notable exception), fish living in them are less likely to develop the local adaptations that lead to speciation. With freshwater fish representing nearly 25% of the total vertebrate diversity on Earth, it would seem the old saying “plenty of fish in the sea” might be more accurately rephrased as “plenty of fish in the stream.”