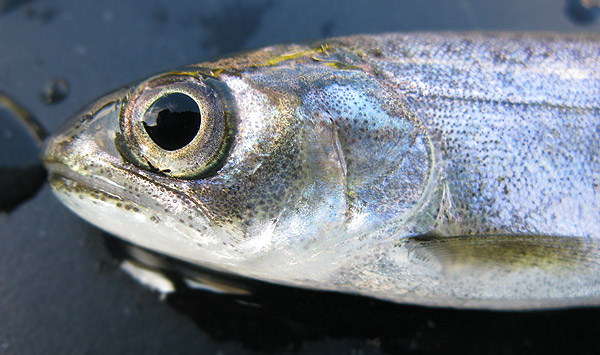 In an effort to maintain the genetic diversity of Chinook salmon while increasing their survival, the California Department of Fish and Game (CDFG) made it’s first ever attempt at transporting Chinook smolts down the Sacramento River by barge. However, the concept of barging salmon is not new and barges have been used by the U.S. Army Corps of Engineers (USACE) on the Columbia River since 1955 as a way to safely pass juvenile salmon around the turbines in each of the eleven hydroelectric dams. The first study was designed to test whether the type of transport (in river, trucked, or barged) could affect the probability of survival, but the first attempt at barging proved to be a complete failure because fish were getting caught in nets and killed before they could be released. Since then, barges have been redesigned to be safer for the fish and the USACE is now transporting upwards of 20 million fish per year.

In the California Delta, it’s no secret that juvenile smolt outmigration survival is low, so as a way to increase survival of hatchery-raised salmon, CDFG began transporting hatchery Chinook by truck around the Delta in 1973. Soon, biologists began observing an increase in salmon straying into different tributaries and spawning with salmon native to those rivers. The increase in straying likely occurs because fish that are transported by truck are unable to imprint on the unique chemicals from the tributary in which they were spawned. Multiple studies have demonstrated that fish released in stream have a lower tendency to stray than fish released at an off-site location like the San Francisco Bay. When fish stray from their natal stream it decreases the genetic integrity of the population and they become more homogeneous (i.e., genetically similar) and susceptible to changes in the environment. A minor change in the ecosystem could have detrimental affects on a species that lacks genetic diversity due to constant intermingling.

With help from the Commercial Salmon Trollers Advisory Committee (CSTAC), CDFG will spend the next several years conducting releases at various locations to evaluate survival and straying. A total of 300,000 fish were coded-wire-tagged (100,000 for each location) and released for the experiment. Two of the groups were trucked to their release sites, one at a location in the Bay and the other in the Sacramento River near Sacramento; while at the same time, salmon smolts were barged down the Sacramento River and out to the Bay. CSTAC has committed to donating the use of the boat for three years with the understanding that the information will provide biologists with the knowledge to better manage hatchery-reared salmon.