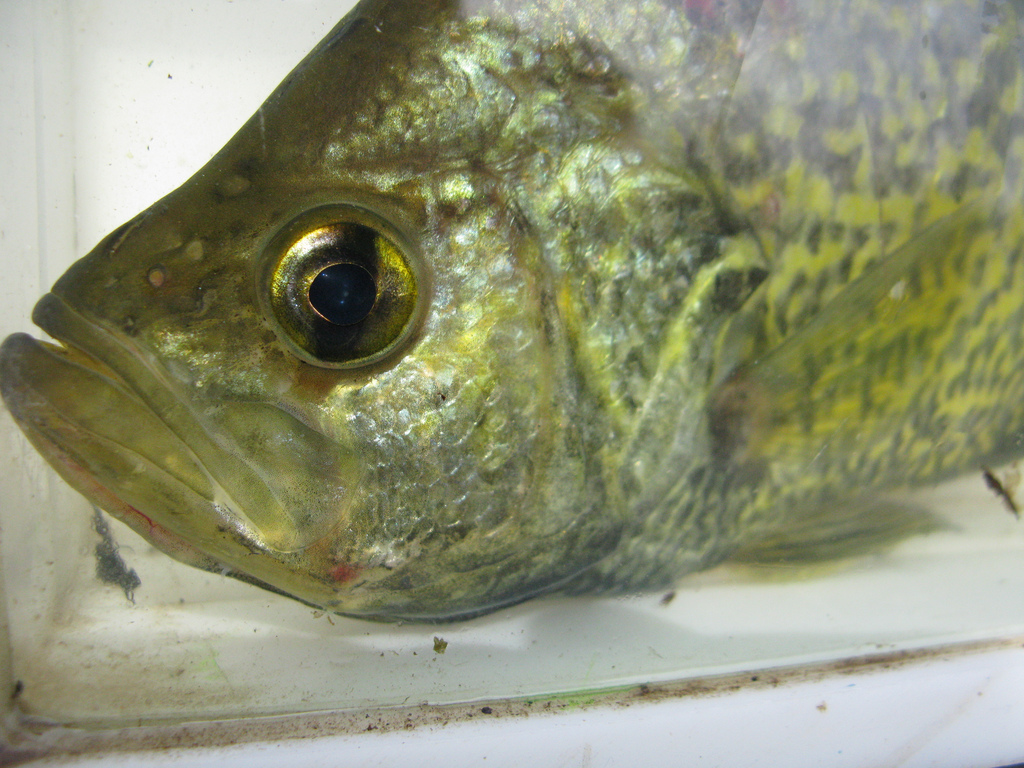 If fish breathe through their gills, why do they have nostrils?

A fourth-grade student posed this question to our biologists while we were visiting a classroom for our Three Rivers education program. We thought it was a pretty astute observation, and an interesting topic worth discussing. The answer, in short, is smell. Human noses serve the dual purposes of smelling and breathing, but these two functions are completely separated in fish: nostrils are for smelling, gills are for breathing. Each nostril in a bony fish actually consists of two openings, as shown on this black crappie above. Water passes into the forward opening, flows past the fish’s sensory cells, and exits through the rear opening. Fish that live in darker, murkier environments tend to rely more heavily on smell to sense their environment, compared to fish that live in clearer, brighter water, which rely more on their eyes instead.

Fish sniff the water coming through their nostrils (also called nares) to detect chemicals in the water, which can help them avoid predators, locate mates, and also direct their migration. Some of these scents are pheromones, which are chemicals released by other animals that trigger some kind of response in the receiver. For example, an injured fish that has been bitten by a predator may give off a scent that triggers an “alarm” response in other fish of that species, prompting them to flee (Sorensen and Stacey 2004). Or the scent may come from the environment the fish lives in. Salmon are famous for “smelling” their way back to the streams where they were born based on the chemical composition of the water in that stream (Dittman and Quinn 1996). While salmon use forces such as the Earth’s magnetic field to direct their migration in the open ocean, they switch to using smell as they enter freshwater, searching for their natal stream’s chemical fingerprint. It’s a great example of how a little nose can go a long way.