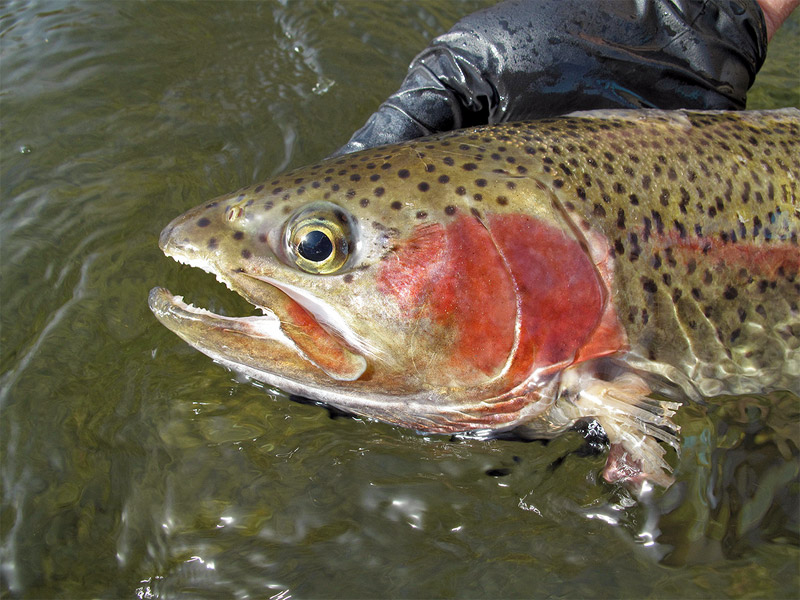 When talking to the public, we are often surprised by how little people know about the fish in our local rivers and stream. People are often unaware that we have steelhead (Oncorhynchus mykiss) in California Central Valley rivers. The adult O. mykiss in the photograph above is a kelt that was encountered at a fish counting weir on the Stanislaus River. The term kelt is used to describe to a spawned-out salmon or steelhead that is returning to the ocean. Pacific Salmon are predominantly semelparous, dying after spawning only once. Conversely, steelhead don’t necessarily die after spawning and can spawn multiple times (iteroparous). After spawning steelhead are very weak and tend to drift downstream like giant smolts heading out to sea, but most will continue to deteriorate and eventually die before making it to saltwater.

In the Columbia River repeat spawning by steelhead is estimated to rage from 1.6 to 17% (Branstetter et al 2006). Researchers in the Yakima Basin have been experimenting with “reconditioning” steelhead kelts to improve their ability to spawn again. They capture wild steelhead kelts emigrating out of the Yakima River and then care for them in a fish culture facility. The fish are provided antibiotics and food and held in captivity for weeks to months before they are release back into the Yakima River or below Bonneville Dam in the Columbia River. Researchers have seen higher survival to the ocean and an increase of kelts returning to the river. The Bonneville Power Administration has produced an excellent video featuring the Kelt Reconditioning Program.