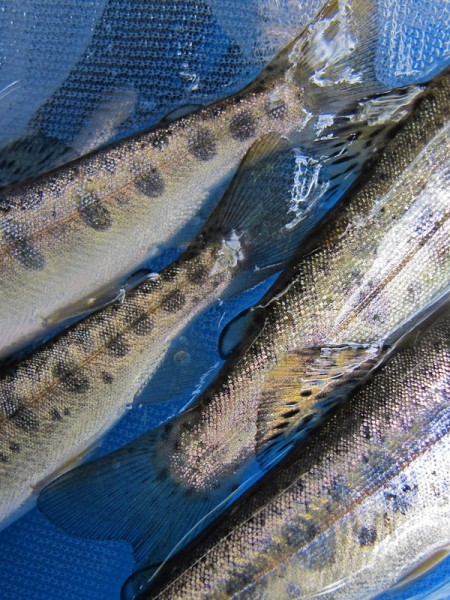 The fleshy adipose fin located between the dorsal and caudal fin of salmonids, has generally been considered a rudimentary, non-functional trait. It is often removed as a way of marking hatchery produced fish (i.e. ad-clipped fish). A recent study conducted jointly by St. Francis Xavier University and University of Victoria in Canada found that the fin may actually be more functional than previously thought (Buckland-Nicks et al. 2011).

The adipose fin was so named because it was mistakenly believed to contain adipose tissue (i.e. fat). The one exception is the black bullhead (non-native to the Central Valley), which has considerable adipose tissue in the fin core. Furthermore, the fin was previously thought to lack nervous tissue. However, a study of rainbow trout published in 2004 found that its absence can affect swimming efficiency in turbulent waters, indicating that it may function as a flow sensor. The fin could sense flow before it reaches the caudal fin, providing feedback to the nervous system, and improving caudal fin swimming efficiency (thus functioning as a ‘mechanosensory’ organ). Buckland-Nicks and colleagues used electron microscopy to discover that the adipose fin of brown trout is actually made up of loose connective tissue, containing a network of cells, collagen fibers and nerves associated with collagen cables. The discovery of a neural network throughout the adipose fin provides support for the hypothesis that it has a sensory function, however more research is needed to determine the actual function of the fin.