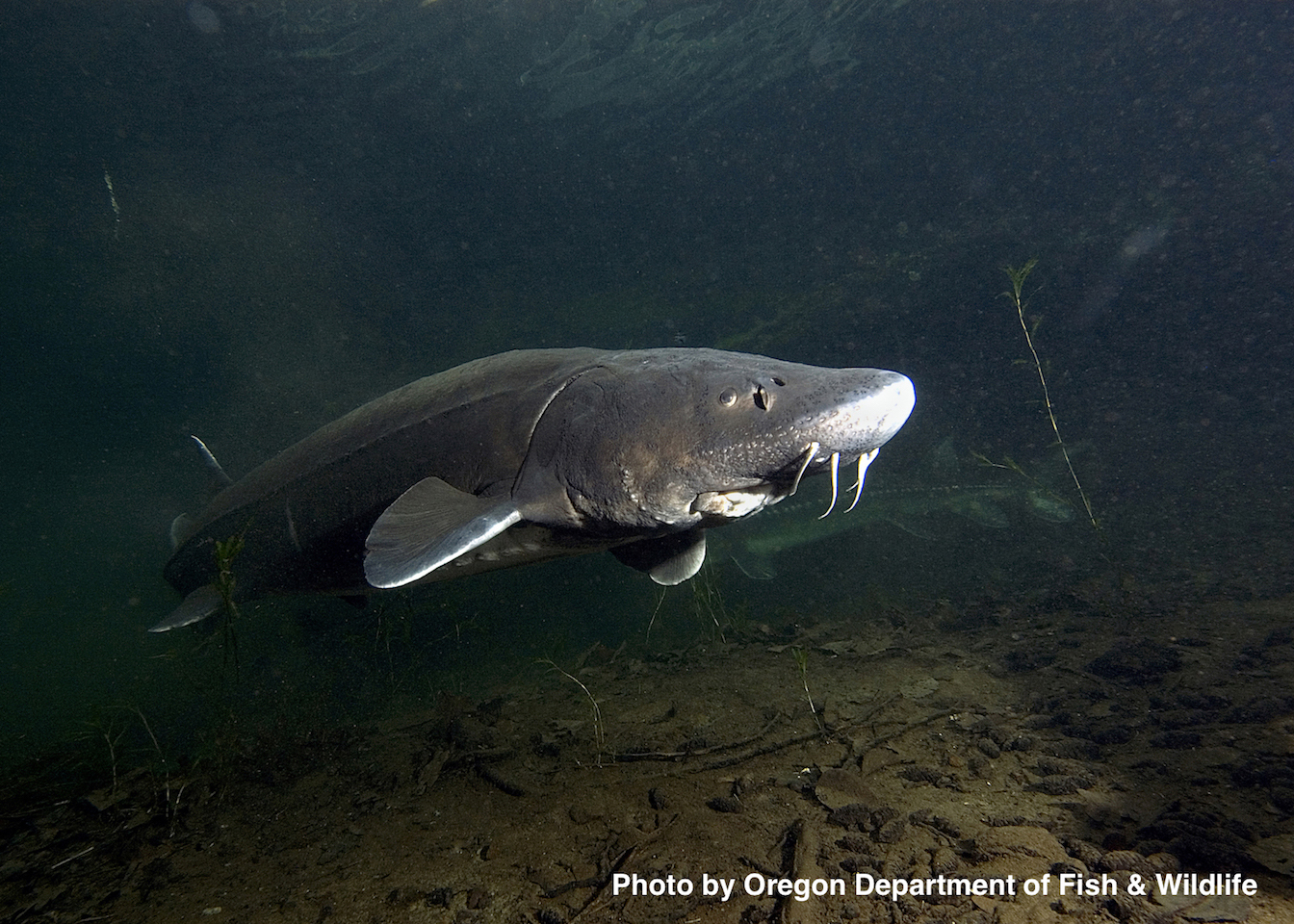 Sturgeon are impressive, prehistoric-looking beasts lurking in the shadows of river-bottoms. Two species of sturgeon are native to California, the white sturgeon and the green sturgeon. The green sturgeon was listed as a threatened species under the Endangered Species Act in 2006, but both species have been in decline since the late 1800s. Sturgeon are slow growing and long lived, especially white sturgeon, which can live up to 100 years and grow up to 20 feet long. Sturgeon live throughout San Francisco Bay, and are known to come into the Sacramento-San Joaquin Delta to lay eggs. Until recently, it was unknown whether they came far enough south to inhabit the San Joaquin river or its tributaries, which are usually too warm and shallow for sturgeon. Fishermen have turned out to be the missing link between biologists and the elusive sturgeon, which are difficult to detect with traditional sampling methods. The U.S. Fish and Wildlife Service (USFWS) were surprised when they began hearing reports from anglers catching white sturgeon in the San Joaquin River.

The agency began sampling for newborn sturgeon to see whether or not the fish were reproducing in the river or just visiting. They finally captured some larval white sturgeon in 2016, proving that certain conditions can allow the species to spawn in the San Joaquin. Researchers are now analyzing the conditions sturgeons seem to prefer for spawning. It is known that the fish like cold water and cobble substrates, but research from the last few years shows that sturgeon spawning usually coincides with high-flow events caused by rain or dam releases. Sturgeon typically come upriver to spawn between February and March, when snow melt would historically start to flow downstream. However, one of the most surprising discoveries from the USFWS sturgeon research has been finding both adults and eggs in the San Joaquin River during the recent extreme drought years of 2012–2015, suggesting that sturgeon can still reproduce without heavy riverflows. The scientists are still investigating the effects of flow on the fish, as well as factors such as temperature and oxygen

Earlier this year, a biologist out fishing at Knights Ferry reported seeing a green sturgeon in the Stanislaus River, which was later documented on camera and by DNA samples in the water. While such sightings are hopeful, the fish aren’t out of hot water just yet. Sturgeon take around 15 years to reach sexual maturity and only spawn every 2 to 4 years, so the species are expected to continue declining until enough juveniles survive long enough to reproduce. But if they keep popping up where they’re least expected, the species may be showing some much-needed signs of resiliency.