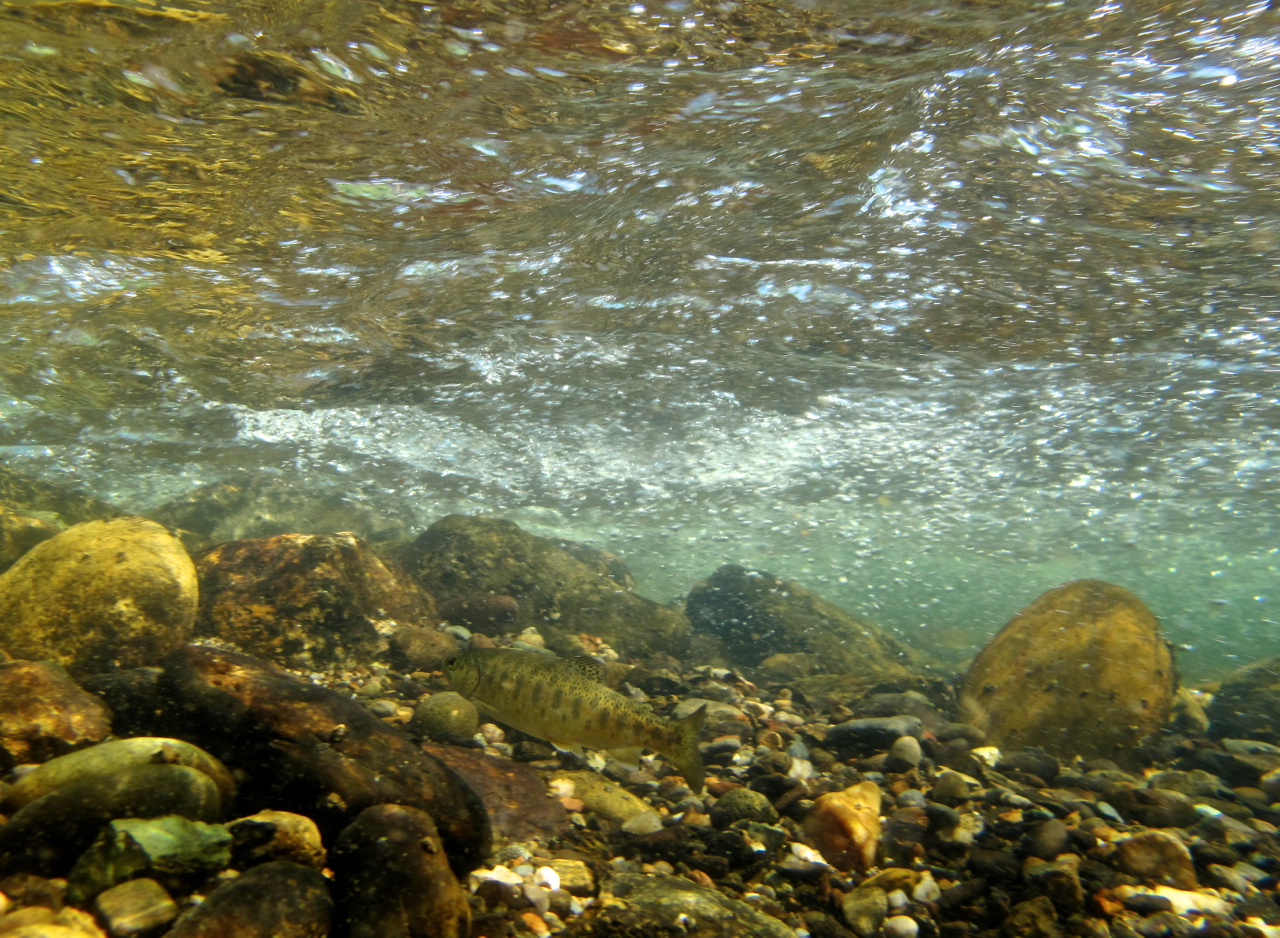 As scientists, we’re used to monitoring fish behavior with sound – but fish themselves are also experts in acoustics. Descend into the aquatic world, and you will undoubtedly hear the whooshing, rushing, and crashing of water. But listen closely enough and you might also hear a symphony of sounds from the fishes: a medley of clicking, popping, scraping, grunting, knocking, and drumming. There are more than 800 fish species in the world capable of producing sounds (Rountree, Goudey, and Hawkins 2002) for communicating, attracting mates, or reasons unknown. At standard temperature and pressure (32°F and 1bar), sound travels through water at about 4,911 feet per second, much faster than it does through air at about 1,086 feet per second. It therefore makes sense that sound production and hearing play an important factor in the lives of various fish species.

Fish can produce sounds through various methods, including vibrating their swim bladder, rubbing body parts together (called stridulation), or mechanically moving water with their bodies. Most studies of this phenomenon have focused on marine species (Gannon 2008), and fish families identified as sound producers include, but are not limited to, drums, cods, sculpins, toadfishes, catfishes, gobies, herring, and minnows (Talvoga 1958, Schwarz 1985, Nordeide and Kjellsby 1999, Hawkins and Amorim 2000, Sprague et al. 2000, Hawkins et al. 2002, Midling et al. 2002, Lugli et al. 2003; as cited by Gannon 2008). Fish can perceive sounds through various organs and physiological features, including cilia, swim bladders, and otoliths (Popper and Higgs 2009). Some groups of fishes (such as the minnows and catfishes) also have specialized structures like the Weberian apparatus that effectively increases auditory sensitivity by acting as an amplifier. American shad are capable of hearing sounds that few other animals can hear (Popper and Higgs 2009). Their specialized swim bladder and inner-ear structure allows them to hear ultrasonic sounds, and this ability likely evolved to help them detect and avoid predatory echolocating animals such as dolphins (Popper et al. 2004).

Local California species known to produce sounds include the plainfin midshipman (Porichthys notatus), Pacific herring (Clupea pallasii), bocaccio (Sebastes paucispinis) and other rockfish species (Sirovic et al. 2009), and steelhead/rainbow trout (Oncorhynchus mykiss). The male plainfin midshipman uses his swim bladder to make a humming noise that attracts females to his nest (Sisneros 2009). Pacific herring release gas out their vents (i.e., anus), making a bursting sound referred to, fittingly, as a FRT (fast repetitive tick). This is hypothesized as a behavioral mechanism; however, it is unclear exactly how herring use FRTs (Wilson, Batty, and Dill 2004). Bocaccio and rockfish produce agonistic sounds such as growling and rumbles (Nichols 2005). Steelhead/rainbow trout make noises when feeding such as slashing, clicking, and scraping; however, the purpose of these noises is unclear (Phillips 1989). Although a study investigating sound production by white sturgeon (Acipenser transmontanus) failed to capture any emitted sounds (Johnson et al. 2009), both pallid sturgeon (Scaphirhynchus albus) and shovelnose sturgeon (S. platorynchus) are known to produce sounds during spawning activities (Johnston and Phillips 2003).

With many species closely attuned to the sounds around them, fish can be adversely impacted by anthropogenic noises, such as pile driving. Regulatory measures exist to ensure protection of fishes during aquatic construction, as set forth by the Fisheries Hydroacoustic Working Group. Additionally, anthropogenic sounds may induce behavioral changes in fish, cause stress or permanent physiological damage, and even result in death (Popper and Hastings 2009, Popper and Higgs 2009). Being mindful of how we interact with our environment can help reduce the impact of any stressors we may create. Fishes clearly have their own repertoire of musical notes and an attentive audience of their peers. So the next time you stick your head under the water, listen closely because you just might hear something fishy coming from the watery depths – try not to interrupt it.