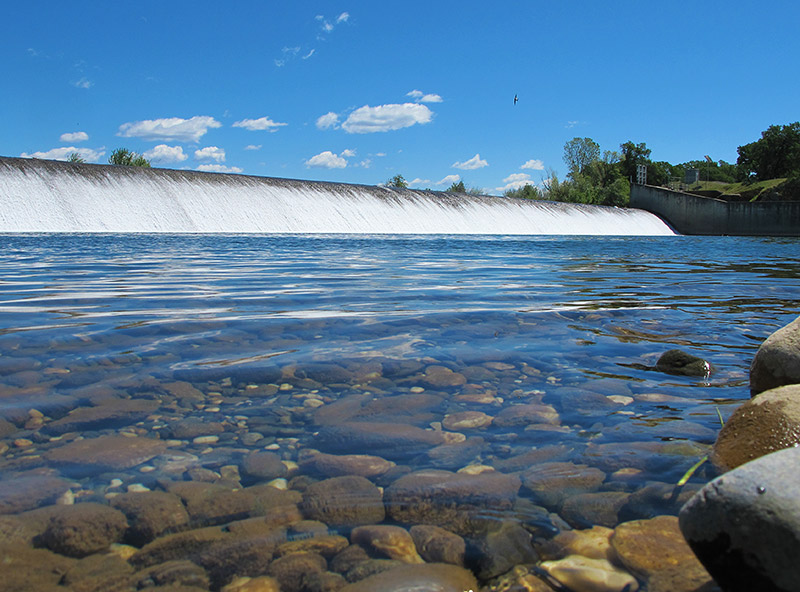 Standing just 24 feet tall, Daguerre Point Dam on the Yuba River is a dwarf compared to most mainstem dams on California’s Central Valley rivers, which tower more than 500 or 600 feet. Though short in stature, the dam has become a sizable point of contention. Built at the beginning of the 20th century to prevent mining debris from washing into the Feather and Sacramento rivers, the dam provides hydraulic head for irrigation diversions. Two fish ladders, one on each side of the river, were added in 1937 to allow salmon and steelhead access to the reaches between Daguerre and the Englebright dam upstream.

However, these fish passage facilities prove inadequate under certain flow conditions, and the National Marine Fisheries Service identified the dam as a major stressor to native anadromous fish populations in a biological opinion issued last year. Motivated by the aspiration of healthy salmon populations, various entities now advocate removing the structure, while others maintain the barrier serves as an important water diversion to the valuable local agricultural industry, and also blocks predatory fish (such as striped bass) from accessing salmonid rearing habitat above the dam.

A proposed hydropower project at this site recently stirred up new controversy over the future of the structure. Some see the dam as an outdated remnant of a time when the ecological impacts of development were not adequately considered. Concerned parties worry about continued and even additional fisheries impacts of the proposed hydropower facility, while advocates promise renewable energy, job creation, and improved fish passage. Such debate underscores that Daguerre Point Dam, despite its modest size, continues to be more than a small obstacle on the road to developing or restoring the Yuba River.