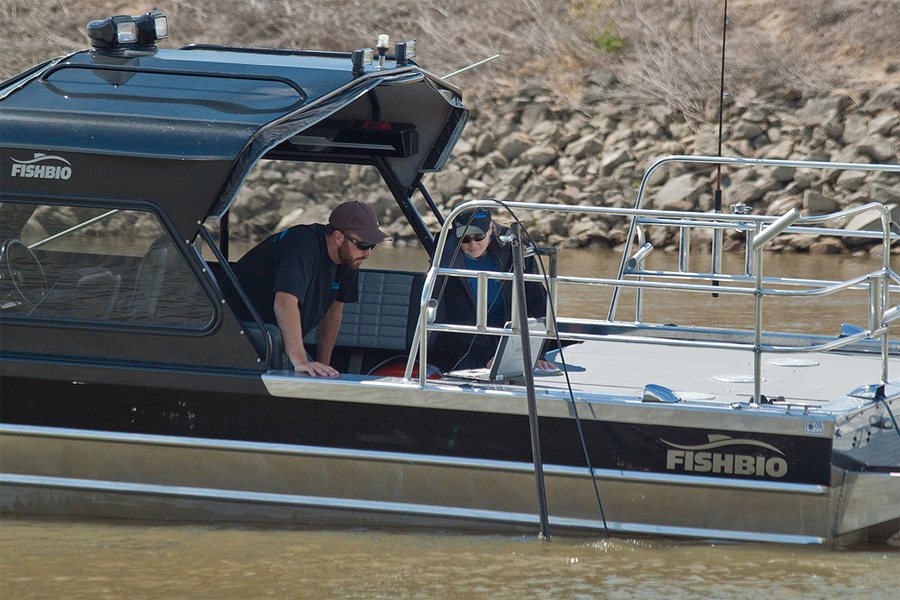 FISHBIO, Hanson Environmental, U.S. Fish and Wildlife Service, California Department of Water Resources, California Department of Fish and Game, and the U.S Bureau of Reclamation  are working together to tag, release, and track Chinook salmon and steelhead smolts in the San Joaquin River using acoustic telemetry. The studies are part of the Vernalis Adaptive Management Program (VAMP), the 6-year steelhead survival study, and the South Delta Temporary Barriers Study.

VAMP is a collaborative effort by private and public interests to evaluate and improve the survival of downstream migrating Chinook salmon in the San Joaquin River Basin. The VAMP was initiated in 2000 as a large-scale, long-term, experimental management program to comply with State Water Resources Control Board (SWRCB) Decision 1641. Initial studies were conducted with hundreds of thousands of coded wire tagged Chinook salmon smolts released at various locations in the San Joaquin River and recovered in trawls conducted at Chipps Island and Antioch. Starting in 2007, no coded wire tag releases were made as part of VAMP due to the low numbers of fish available. Acoustic telemetry technology has been utilized to study reach-specific survival of salmon smolts through the south and central Delta since 2007.

The 6-year Study is a new program stemming from the National Marine Fisheries Service’s (NMFS) 2009 Biological Opinion (BiOp) on long-term operations of the Central Valley Project (CVP) and State Water Project (SWP). One of the BiOp’s Reasonable and Prudent Alternatives (RPA IV.2.2) requires the Bureau of Reclamation and Department of Water Resources (DWR) to undertake experiments utilizing acoustic telemetry to estimate the proportional mortality of outmigrating steelhead smolts due to flows, exports, and other project and non-project factors in the lower San Joaquin River and the Delta.

The South Delta Temporary Barriers Study (SDTB) is intended to evaluate the effects of temporary rock barriers installed across South Delta channels at three locations by DWR to improve water levels and circulation. HTI acoustic telemetry technology has been utilized since 2010 to estimate survival of Chinook salmon smolts and steelhead after the barriers are installed in late May.

For the past several weeks crews have been surgically implanting HTI acoustic transmitters into Chinook salmon and steelhead smolts at the state and federal fish salvage facilities located near Tracy. Once tagged, the fish are carefully transported to the release site on the San Joaquin River and held for post-op recovery in underwater pens for 24-48 hours. Groups of fish are released into the river at various pre-determined times (i.e. ‘release groups’) to begin their migration downriver and through the delta. The tagged fish are tracked using an array of fixed receiver stations throughout the study area, as well as boat-mounted mobile receivers. Fixed stations provide data to estimate reach specific survival, while mobile tracking allows the researchers to collect additional information on migration between the fixed-station receivers, including identification of areas of high predation.