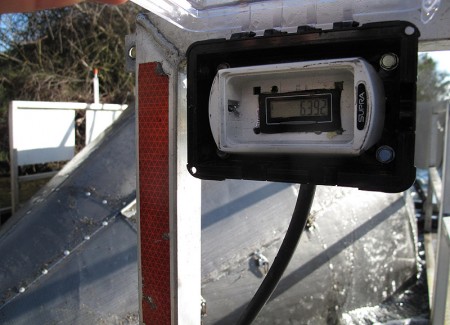 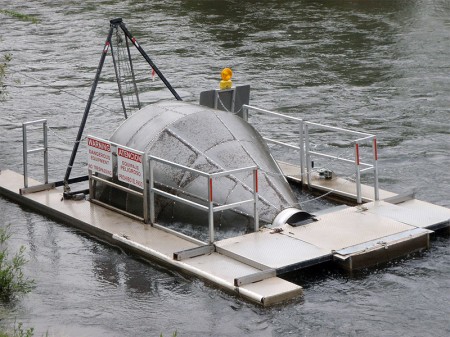 Rotary screw traps are used extensively to monitor downstream migrating juvenile salmonids (See: The Count is on). Rotary screw traps utilize a rotating cone powered by river flow to funnel fish into an underwater live-well. The total number of rotations that the trap cone makes in a sampling period (usually 24-hours) is a measure of sampling effort, and the average rate of rotation is also an important factor. If a traps stops during a sampling period, these two pieces of information make it is possible to estimate how long the trap fished before being interrupted by debris.

For the past 20years rotary screw trap operators have relied on mechanical counters to record the total number of rotations in a sampling period but these have been problematic. Mechanical counters rely on an arm attached to the rotating cone to strike a lever on the counter to trip the rotary counter. The mechanical counters on the market today are manufactured with plastic components and lightweight springs that make them susceptible to failure when exposed to the harsh conditions at rotary screw traps during monitoring seasons that extend for several months annually.

We have  developed a prototype digital counter that works similar to a bicycle speedometer. This counter uses a small magnet attached to the rotating cone and records a revolution each time the magnet passes the receiver of the electronic counter. The receiver is wired to the water resistant counter which allows the counter to be mounted in a secure location away from any moving parts. We are currently operating this prototype simultaneously with mechanical counters on several of our traps to evaluate the accuracy and reliability, and so far the results look promising.