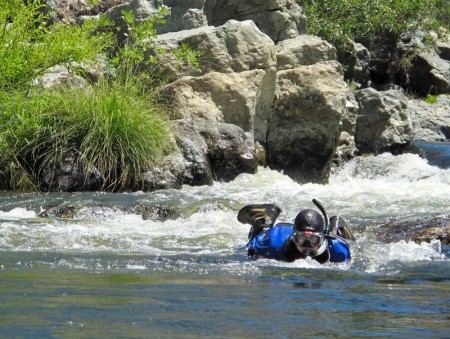 Snorkel surveys are widely used as a technique to assess abundance and distribution of salmonid populations in rivers and streams. This summer we are surveying a few Central Valley rivers to monitor rainbow trout/steelhead (Oncorhynchus mykiss) populations. It is best to conduct these surveys during the summer because stream flows are lower, there is no spawning to disrupt, and the juvenile O. mykiss have moved away from their hiding places along the river bank. Also, since snorkel surveys use relatively little equipment (usually just your snorkel gear and a dive slate to take notes), they are useful in remote locations where other techniques are not possible (O’Neal 2007). Last week, five out of eight survey days were spent in a canyon reach, where access is limited by the steep canyon walls. The limited access made the survey more complicated, but it also made the work more exciting. The long days are worth it when you get to kayak the rapids between each site.