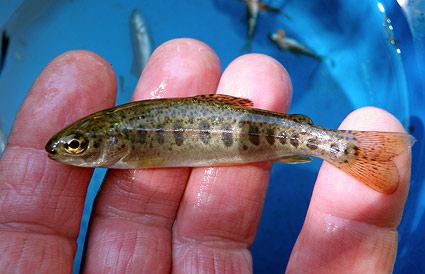 This juvenile rainbow trout (Oncorhynchus mykiss) was recently captured in a Central Valley tributary. At 3 inches, it is similar in size to many young trout typically captured during late spring and early summer. Researchers have found that Rainbow trout growth rates range from about 0.5 cm to 1.1 cm per week dependent on water temperatures, where fish grow slower in colder water. By knowing what the water temperatures were during the months prior to capture, we can compare fish lengths with expected growth rates to estimate the general date when trout were spawned. Based on these calculations, young-of-year trout captured in late spring and early summer 2010 were produced from adults spawning from late 2009 through early 2010. 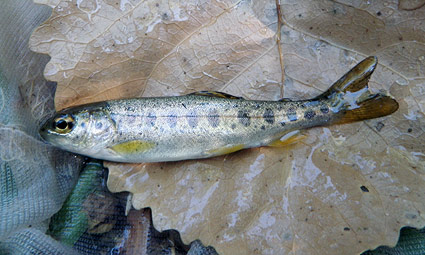 The species Oncorhynchus mykiss consists of both a resident form (Rainbow trout) that spends its entire life in freshwater and an anadromous form (steelhead) that spends part of its life in the ocean. Like all salmonids, O. mykiss are torpedo-shaped and possess an adipose fin, a soft fleshy fin found on their back between their dorsal fin and caudal (or tail) fin. Resident trout coloring and spot patterns vary widely depending on fish age, habitat conditions, and whether they are ready to spawn, but they are generally blue-green or yellow-green in color with a pink streak along their sides, white underbelly, and small black spots on their back and fins. Steelhead are typically silver with faded spotting and a faint lateral red band that becomes more prominent during spawning.