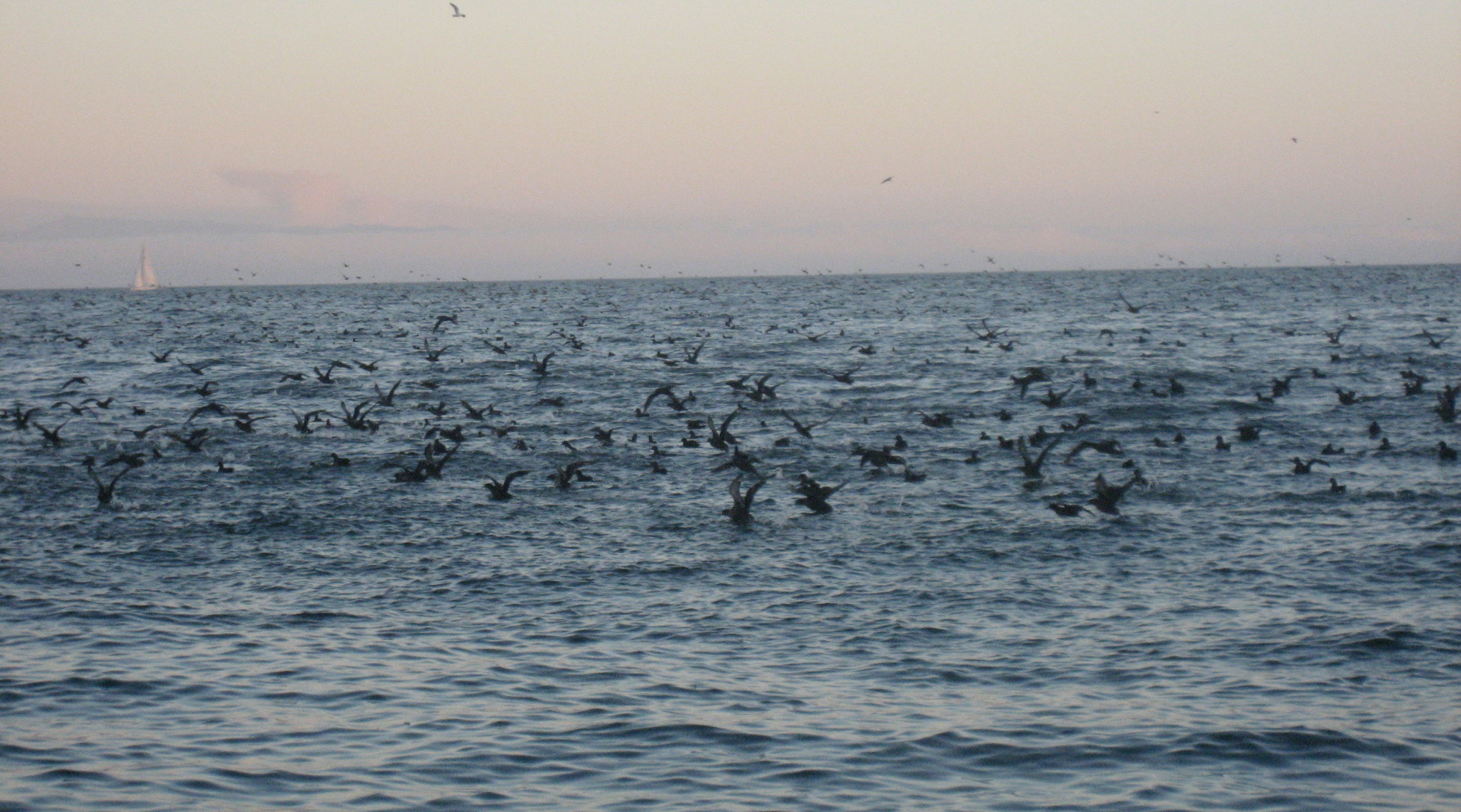 Mid-summer to mid-fall is a time when our Santa Cruz office and the rest of the Monterey Bay witnesses the arrival of thousands of international visitors. These aren’t sight-seeing tourists or traveling scientists, but rather a type of seabird called the Sooty Shearwater (Ardenna grisea). Sooties are deceptively unassuming birds at first glance – something like a small, drab seagull – but two things make them truly remarkable: distance and numbers. Every year these long-distance athletes undertake a round-trip flight of a staggering 40,000 miles – something that happens when your breeding ground is in one hemisphere and your feeding ground is in another. The birds transverse the entire Pacific Ocean in a figure eight pattern, starting from their nesting areas near New Zealand, then heading eastward, sometimes as far as Chile, before cutting northwest towards Japan, Alaska, or California to forage, then looping back to the Southern Hemisphere. It represents the longest animal migration ever recorded electronically by scientists.

What makes the California coast a desirable destination for these winged wanderers? The rich waters of the Pacific Ocean are important feeding areas not just for young salmon, but for a host of other animals as well. In particular, the process of upwelling draws nutrient-packed waters of the deep ocean up to the surface, triggering an explosion of food in the California Current that travels southward along the coast. Supported by bountiful blooms of plankton, the ocean food web includes an abundance of krill, squid, jellies, and fish – all of which are shearwater food. Hundreds of thousands of Sooty Shearwaters converge on Monterey Bay each year to take part in this feast, with some estimates as high as a million birds. They can appear like dense, black clouds moving across the water, like smoke billowing over the ocean. Up close, it’s a rush of wings and splashes as the birds plunge beneath the waves as deep as 200 feet, “flying” underwater in pursuit of prey. 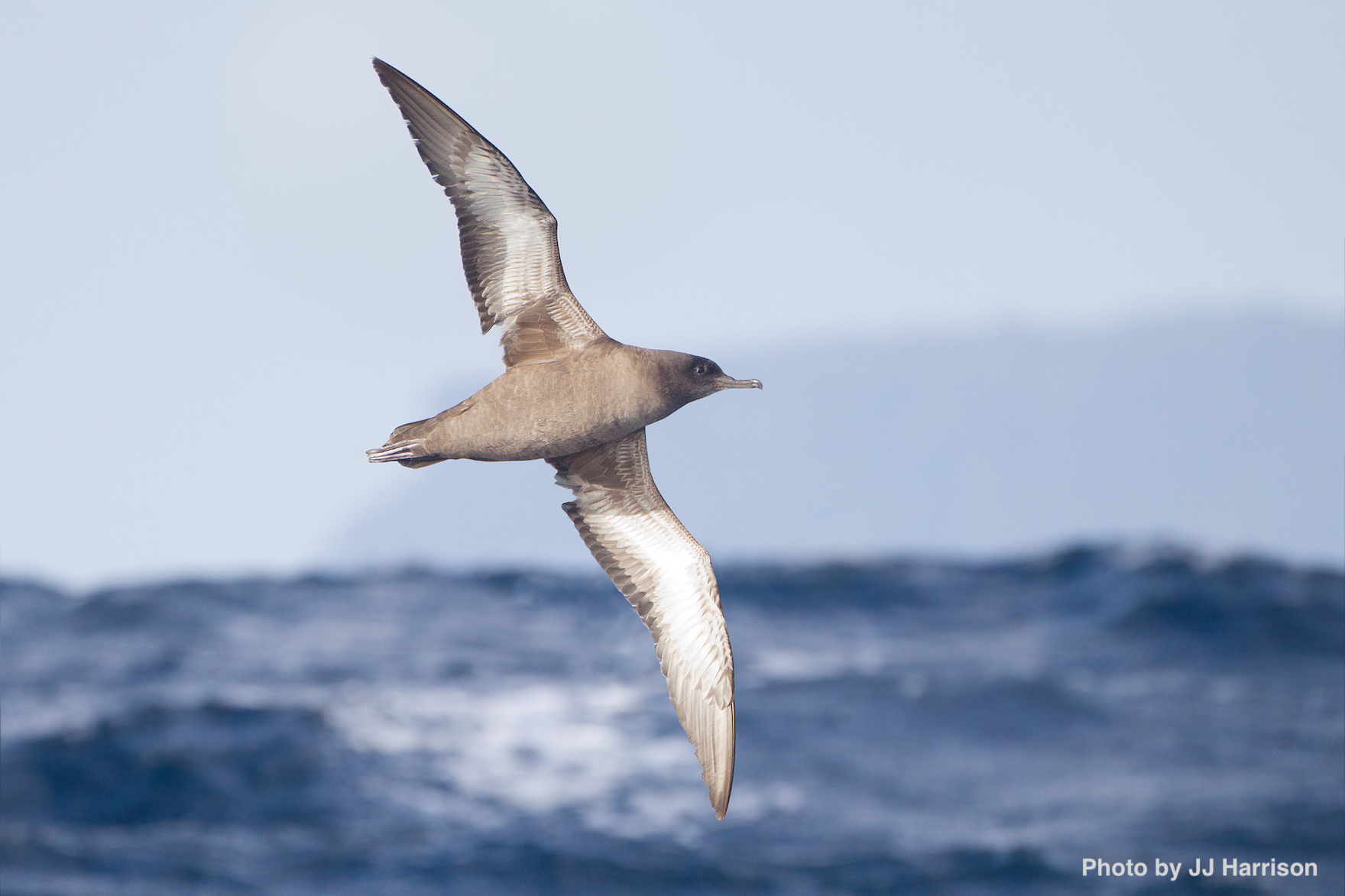 Migrations are an awe-inspiring phenomenon in any animal, especially when coupled with sheer abundance. Despite their breathtaking numbers, however, Sooty Shearwaters are actually declining, and in 2018 were placed on the IUCN Red List as “Near Threatened.” Like any migratory species, these birds are vulnerable to threats they might encounter across their entire range, whether invasive species in their nesting areas or declines in prey species due to climate change or overharvest in their feeding grounds. Events like World Migratory Bird Day can help draw attention to the challenges facing migratory birds – and we hope can also help build appreciation for the less visible but no less remarkable migrations of fish (which now have a celebratory migration day of their own). Whether winged or watery, these examples remind us that migrations are worthy of marveling at, but can also be fragile, and are not something to take for granted.

To experience the thrill of the Sooty Shearwater bonanza, watch this video to immerse yourself in a particularly dense flock!