Like the city of the same name, the Carmel River is small and picturesque, nestled in the hills of the Carmel Valley. The average passerby may not realize the importance of this little stream, both for fish that call it home as well as hundreds of thousands of people living on the Monterey Peninsula. The river itself is fairly small, only flowing about 30 miles from the peaks of the Santa Lucia and Sierra de Salinas to the lagoon at Carmel Bay. It is also a naturally intermittent system, with historic estimates suggesting the lower portions of the river may only have had year-round flow in about six of every ten years. Although these characteristics represent challenges for anadromous fish, it is believed that an average of 8,000 adult steelhead would historically spawn in the Carmel watershed every year. However, both the river and its fish have seen significant changes over the past 150 years, reducing steelhead populations to a shadow of their former selves, and several efforts are now working to improve conditions for steelhead in the Carmel.
Steelhead migrating up the Carmel first encountered a dam in 1883, marking the beginning of water export from the river for use on the Monterey Peninsula. In following decades, two larger dams were constructed to accommodate the water needs of the region’s growing population: San Clemente Dam in 1921 and Los Padres Dam in 1948. While these dams provided significant benefits for humans, they represented new challenges for steelhead, and served as barriers to large portions of spawning habitat. It wasn’t until the early 1980s that water diversions from the Carmel were also officially identified as a contributor to significant decline in returning adult steelhead. In this same decade, the Monterey Peninsula Water Management District (MPWMD) and the Carmel River Steelhead Association began efforts to improve habitat and to rescue stranded steelhead from drying reaches of the Carmel, which had begun to dry annually. This practice has continued, and so far more than 5,000 fish have been rescued from drying reaches in 2019. Since 2011, both the MPWMD and California American Water, the company responsible for supplying water to the Monterey Peninsula, have worked cooperatively to continue a mitigation program that includes steelhead research, rescuing and rearing juvenile steelhead, restoring streamside vegetation, managing the vital lagoon habitat, and monitoring and regulating flows. 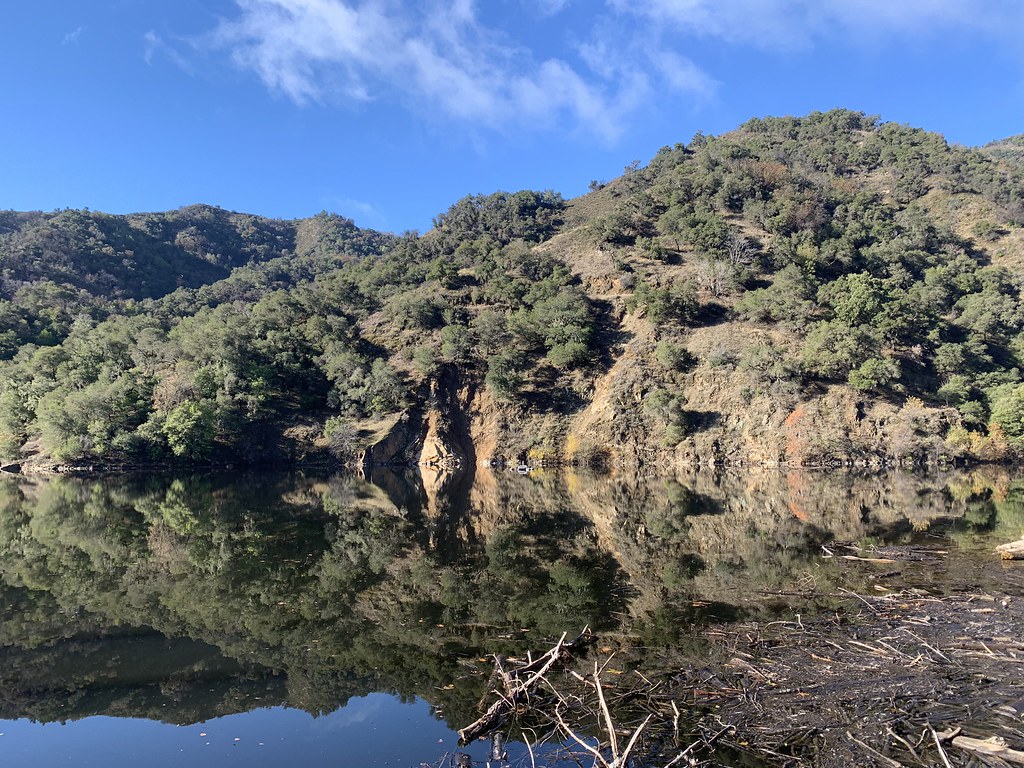 As of 2015, for the first time in nearly a century, steelhead were able to move upstream unimpeded past the former site of the San Clemente Dam, which was removed due to both public safety and ecological concerns. This largest dam removal in California history opened up nearly six and a half miles of the Carmel River for migrating adult steelhead. Fish still face a barrier to movement at Los Padres Dam, but a recently improved “smolt slide” that FISHBIO has assisted with aims to improve the downstream movement of juvenile steelhead, and plans are underway to build a new passageway for adults migrating upstream. The rainy springs of the past few years have resulted in promising numbers of adult steelhead returning to Los Padres. Between January and May of this year, a total of 126 adults made their way to the dam (NMFS personal communication), where they were transported above the structure to reach spawning habitat further upstream.
The Carmel River Lagoon was listed as critical habitat for threatened South Central California Coast steelhead in 2005, and has experienced recent improvements. This seasonal lagoon was historically blocked from the ocean by a sandbar throughout the summer, providing valuable rearing habitat for young steelhead. Once the sandbar was breached by high winter flows, juveniles could make their way into the ocean with a head start on growth thanks to the productive feeding ground of the lagoon. From the early 20th century until recently, however, the sandbar had been mechanically breached to prevent the flooding of nearby areas. As of 1992, this breaching was determined to not qualify as an acceptable emergency action, and plans have been developed to build an Ecosystem Protective Barrier that will encourage natural breaching and remove the need for mechanical breaching. In addition, a recent collaborative project by the Carmel River Steelhead Association, the California Coastal Conservancy, and MEarth placed large woody debris near the lagoon to provide structure and refuge for young steelhead.
The Carmel River has long been a hotspot of research and management efforts, with more than 50 projects currently underway in the watershed. These include plans by Hopkins Marine Station researchers to evaluate steelhead genetics, NOAA and USGS assessments on the effects of the San Clemente Dam removal, Trout Unlimited’s efforts seeking to remove fish passage barriers in the Carmel’s tributaries, and proposals by the Carmel River Steelhead Association to study invasive predators in the lagoon, to name just a few. A current effort likely to have one of the most significant effects on the Carmel River is California American Water’s Monterey Peninsula Water Supply Project, which seeks to build a desalination plant to supply fresh water to the region. Currently, about 60 percent of the potable water on the Monterey Peninsula comes from the Carmel River’s alluvial aquifer, and obtaining water via desalination could greatly reduce the amount taken from the Carmel watershed. Ever the adaptable survivor, steelhead have doggedly persisted in the Carmel River over centuries of physical, ecological, and cultural changes to the region, and informed and sustainable management can help ensure that both people and fish continue to share this natural resource for generations to come.
This post featured in our weekly e-newsletter, the Fish Report. You can subscribe to the Fish Report here.