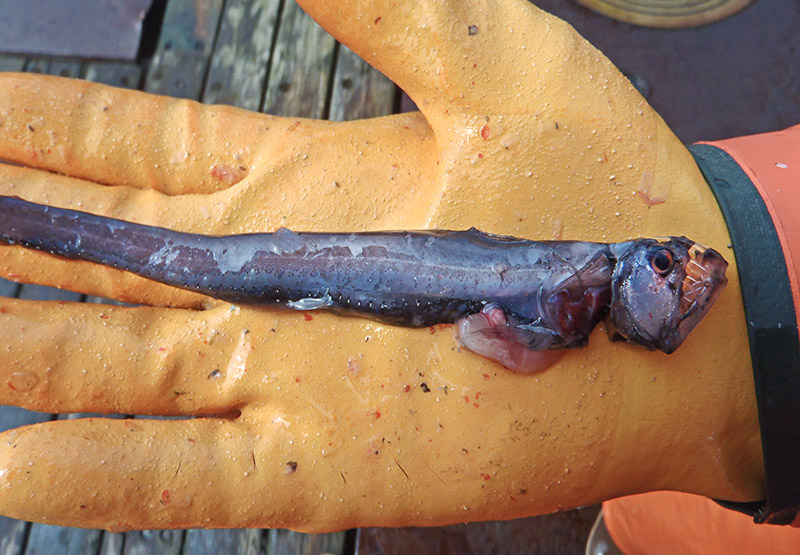 When Pacific salmon, in particular males, undertake their final spawning migration they develop rather fearsome sets of teeth, which they may use to defend their spawning territory against competitors. Though impressive, salmon teeth can’t hold a candle to some of the largest fangs (relative to body size) in the animal kingdom, which belong to species in the family Stomiidae (viperfishes and dragonfishes). The Pacific viperfish (Chauliodus macouni), pictured below, is a deep-sea predator that occurs in the North Pacific from the Mexican coast to Japan in depths of up to 5000 meters (16,405 feet).

In a world where food is generally scarce and predators can hardly afford to miss a meal, large teeth and long, hinged jaws that appear out of proportion to the rest of their body allow viperfish and other deep-sea predators to capture and swallow both large and small prey. Remaining concealed in the twilight of the ocean depths during the day, Pacific viperfish often ascend to surface waters (less than 200 meters, or 656 feet) at night where food is more plentiful (Willis and Pearcy 1982). When the opportunity presents itself, they use their impressive dentition to capture crustaceans and other small fishes (such as lanternfish and other viperfish; Yang 2011).

Viperfish lack a gasbladder to regulate their buoyancy and instead they have deposits of gelatinous tissue, high in water content, that allow them to remain suspended in the water column with minimal energy expenditure (Yancey et al. 1989). It is likely that their ventral photophores (the small  light-emitting organs along their bottom half, barely visible in the photo above) match the penetrating light from the surface and camouflage them from other predators that may be lurking below.

As is the case with so many oceanic species, in particular those that occur in deep waters and are not commercially exploited, very little is known about these fascinating creatures. What we do know, however, is that we are glad that salmon don’t have teeth of viperfish proportions, or our in-river surveys would be downright scary!