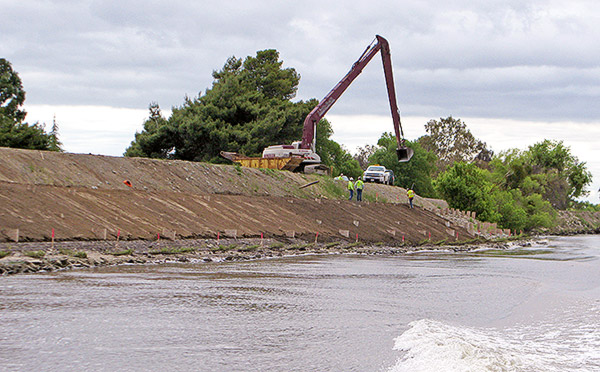 In this post-Katrina world, California is struggling to find a balance between the protection of its environment and its citizens. Much of the destruction and loss of life in New Orleans resulted from levee failure and subsequent flooding. In the wake of the devastation the U.S. Army Corps of Engineers (Corps) began a nation-wide evaluation of levee systems and many didn’t make the cut. In 2007, the Corps released a white paper announcing that they wanted the removal of a substantial amount of vegetation from the banks levees maintained by both federal and non-federal entities nation-wide to increase stability of the levee systems. The levee vegetation removal policy was in response to the Katrina disaster, however, before the Corps released the new policy, it was determined that levee failures that occurred during Katrina were a result of engineering and construction issues and not the vegetation. In response to the new national policy, the California Department of Fish & Game (CDFG) has filed suit against the Corps, stating that the policy does not comply with the federal Endangered Species Act, National Environmental Policy Act, and federal Administrative Procedure Act.

The national policy that the Corps adopted seems counterproductive to what they have been working towards in recent years in California. Since 2006, the Corps, CDFG, California Department of Water Resources, U.S. Fish & Wildlife Service, National Marine Fisheries Service and other agencies have been involved with the Sacramento River Bank Protection Interagency Working Group in an effort repair levees and increase habitat by planting a substantial amount of vegetation on the banks. The white paper lists reasons why vegetation can be destructive to levees including impeding access for maintenance and inspections, hindering emergency flood fighting operations and removing soil from the levee when uprooted by wind. However, CDFG states that the newly adopted policy disregards other national policies, and is a complete reversal of studies previously conducted by the Corps. CDFG argues that studies conducted by the Corps reveal that vegetation on levees can minimize the effects of flooding and in the past the Corps has encouraged (even in some cases required) the planting of trees and shrubs on California levees. The removal of riparian habitat would likely have detrimental effects on several endangered species including Chinook salmon, steelhead, valley elderberry longhorn beetle, riparian brush rabbit, western yellow-billed cuckoo and Swainson’s hawk. It is estimated that only five percent of the original riparian forests remain in the Central Valley and the new policy would reduce this further at a steep price of $7.5 billion. The Corps recognizes some of the beneficial elements of vegetation on levees, such as forming habitat for wildlife, decreasing surface erosion caused by rain, and creating visually appealing landscapes, but determined that the dangers are not worth the risk.

With a quickly growing population and considerable development within the floodplains, efforts to protect lives and property have sometimes caused destruction of habitat for endangered species in the Central Valley. In order for both society and the environment to benefit, the federal, state and local agencies need to work together to come to an agreement on the best approach to the levee system. Recently, the Corps declared 180 miles of levee systems in California ineligible for federal rehabilitation assistance if they are damaged during a flood due to a lack of detail in a new state and local levee maintenance plan along with inadequate inspections. Their intentions are good, but the conflict has only been worsening in recent weeks and there is no resolution in sight.