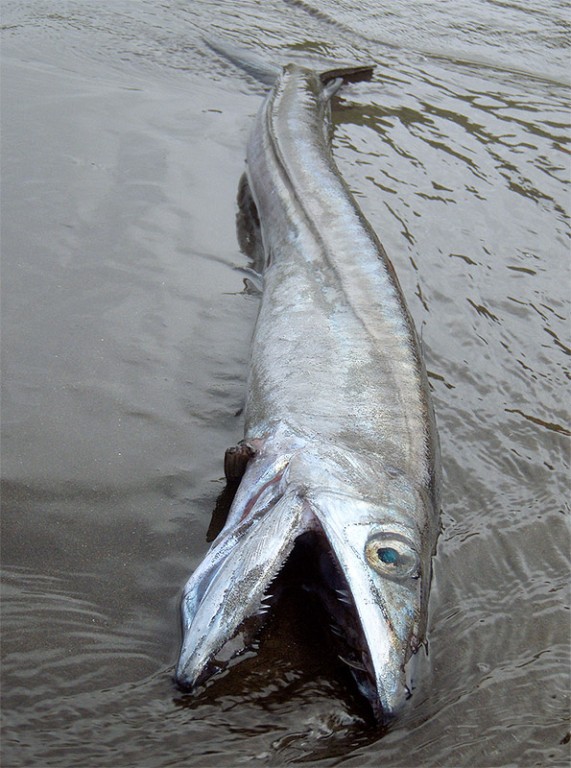 This ferocious looking sea creature is the longnose lancetfish, Alepisaurus ferox (from the Greek, meaning “lizard without scales”), which FISHBIO staff have come across during past travels. Growing to a length of over two meters (6 ½ feet), lancetfish prowl the seas in waters over a thousand meters deep, feeding on fishes, squids and crustaceans (Fujita and Hattori 1976). Lancetfish are frequently caught as bycatch in the tuna longline fishery, although they are not commercially exploited or marketed due to their flabby, white meat. Not only does their white, soft muscle tissue prevent them from being targeted for consumption, but it also implies that they are incapable of sustained swimming at high speeds. Therefore, most of their diet consists of slow moving prey (including lumpsuckers, lanternfishes and juvenile lancetfish; Kubota and Uyeno 1970). In the pelagic, open ocean, environment it is hardly possible to use ambush tactics, owing to the lack of natural cover, but their counter-shaded body (dark on top, light on the ventral side) and high maneuverability (suggested by their large dorsal fin) allow them to lie nearly invisible in the water column and occasionally capture fast swimmers (even juvenile tunas, swordfishes and salmon; see Romanov and Zamorov 2002). 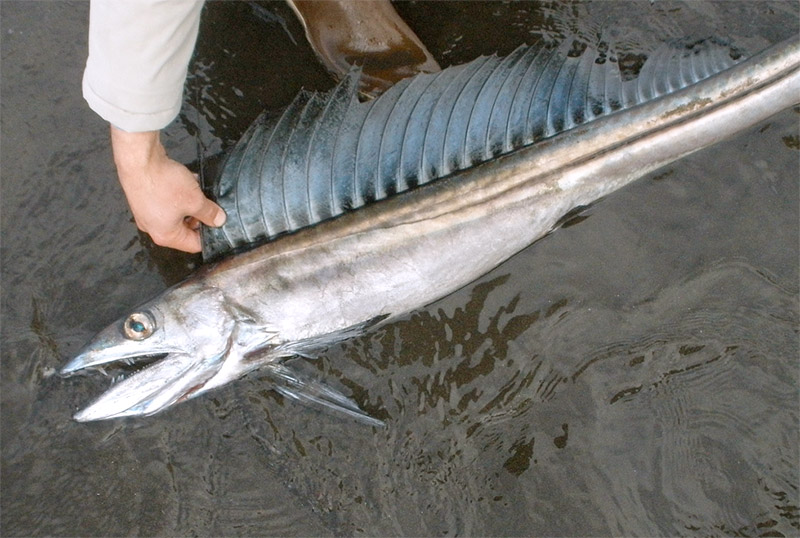 Despite the worldwide distribution of longnose lancetfish and their relatively high abundance, very little is known about the biology of this species. Some evidence indicates that they may be synchronous hermaphrodites, possessing both male and female reproductive organs (Smith and Atz 1973), yet the specific mode, timing and even location of reproduction remain largely unknown. Though not rare, these pelagic predators are seldom seen alive in nearshore waters, but occasionally wash up dead or dying on the shores of all the world’s oceans. The reasons for these occurrences are generally unknown, but may include weakness resulting from high parasite loads, ingestion of non-food items such as plastics, and natural severe changes in oceanic conditions (Kubota and Uyeno 1970, Orlov and Ul’chenko 2002). So next time you take a stroll on the beach, be sure to keep a sharp eye – you might just be lucky enough to come across one of these fascinating creatures.