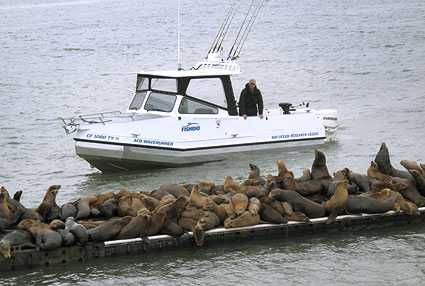 Known for taking up real estate in Pacific harbors, the California sea lion (Zalophus californianus) continues to be a challenge for fisheries managers trying to safeguard federally protected salmon and steelhead. As a result of commercial harvest beginning in the late 1800’s and early 1900’s, the California Sea lion population was reduced to an estimated 10,000 animals by the 1950s. However, California Sea lions became protected under the federal Marine Mammal Protection Act (MMPA) of 1972 and their numbers have increased to an estimated 300,000 animals as of 2009. Today, many consider this larger California sea lion population to be a significant predator and a major factor in salmon and steelhead declines, especially in the Pacific Northwest. For instance, in 2005 the U.S. Army Corps of Engineers estimated that California sea lions consumed 14.5% of ESA listed spring-run chinook salmon returning to the Columbia River. However, critics like the Humane Society contend that sea lions are a natural predator of salmonids that only consume a small portion of various runs, particularly in comparison to fishermen that take three times as many salmon, and that the real cause of salmon and steelhead declines is the operation of hydroelectric dams. 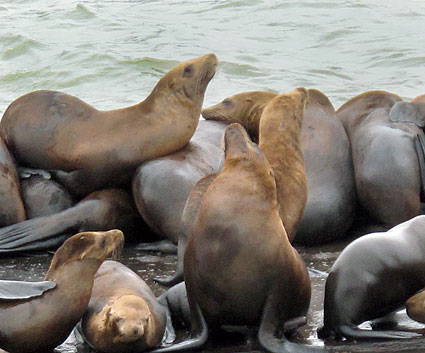 Although California Sea lions are protected under the MMPA, exceptions for individuals have recently been approved whenever they are considered to pose a problem for salmon and steelhead populations. For instance, two years ago the Oregon Department of Fish and Wildlife and Washington Department of Fish and Wildlife were given authority to relocate, remove, or euthanize animals identified as persistent predators on threatened salmon and steelhead. Also, fisheries managers in the Columbia Basin are allowed to use underwater firecrackers, rubber buckshot, and other non-lethal deterrents to “haze” sea lions away from salmonids congregated below the Bonneville Dam. Columbia Basin managers are also allowed to trap, brand, and implant acoustic tags to track individual sea lions loitering below the dam, and to subsequently euthanize those meeting established criteria. As a result, eleven California sea lions were euthanized in 2009 and six thus far in 2010.