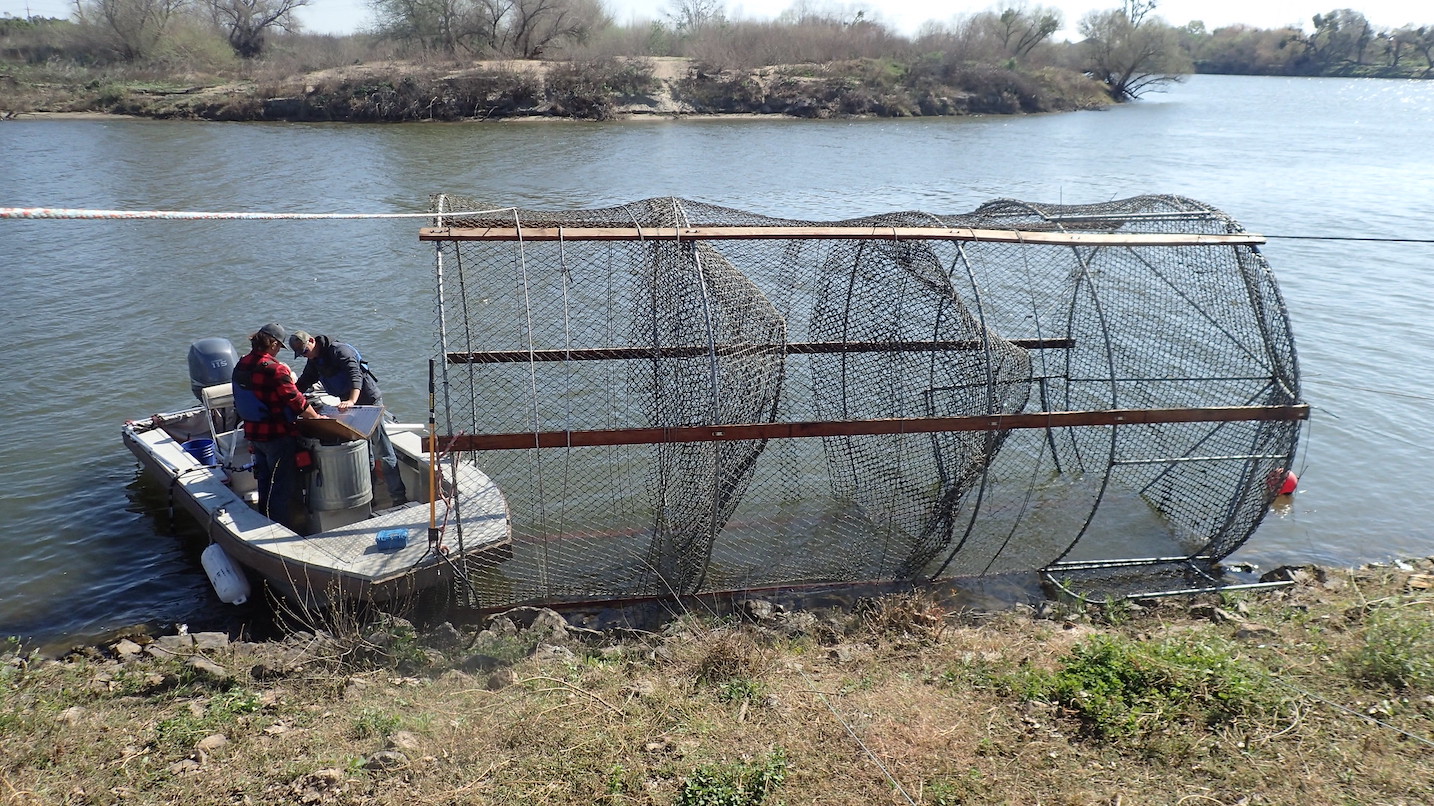 Reeling in a behemoth is a chance encounter with a formidable fish, and your decision whether to keep or release your catch seals the fish’s fate. If your catch is marked with a tag, its fate is of particular interest to fish researchers trying to understand fish survival and abundance. Managing a sustainable fishery requires a great deal of information about a fish population, including population size, or abundance. Although straightforward in concept, estimating the abundance of a fish species can be challenging in practice, especially over a large area such as the Sacramento and San Joaquin basins, the Delta, and the San Francisco Bay in California.

In a previous blog post, we showed how mark-recapture techniques can be used to estimate the size of a bass population in an isolated pond. In that simple example, fish were only sampled twice (once to mark fish and once to calculate the proportion of marked to unmarked fish), and the population was considered “closed,” meaning no new fish were born and none were removed by natural death or harvest. But studies in nature are rarely so simple, and scientists often need to assume that a fish population is “open.” In an open population, new fish can enter the population (either as immigrants or as juveniles growing to a harvestable size, termed “recruitment”), and fish can leave the population as emigrants, as deaths or be harvested. Although more complicated, it is possible to estimate population size when the population under study is considered open. However, in order to do so, all possible fates that could happen to an individual (whether it recruited, migrated, died, was harvested, etc.) need to be accounted for, otherwise the resulting population estimate will not be accurate. 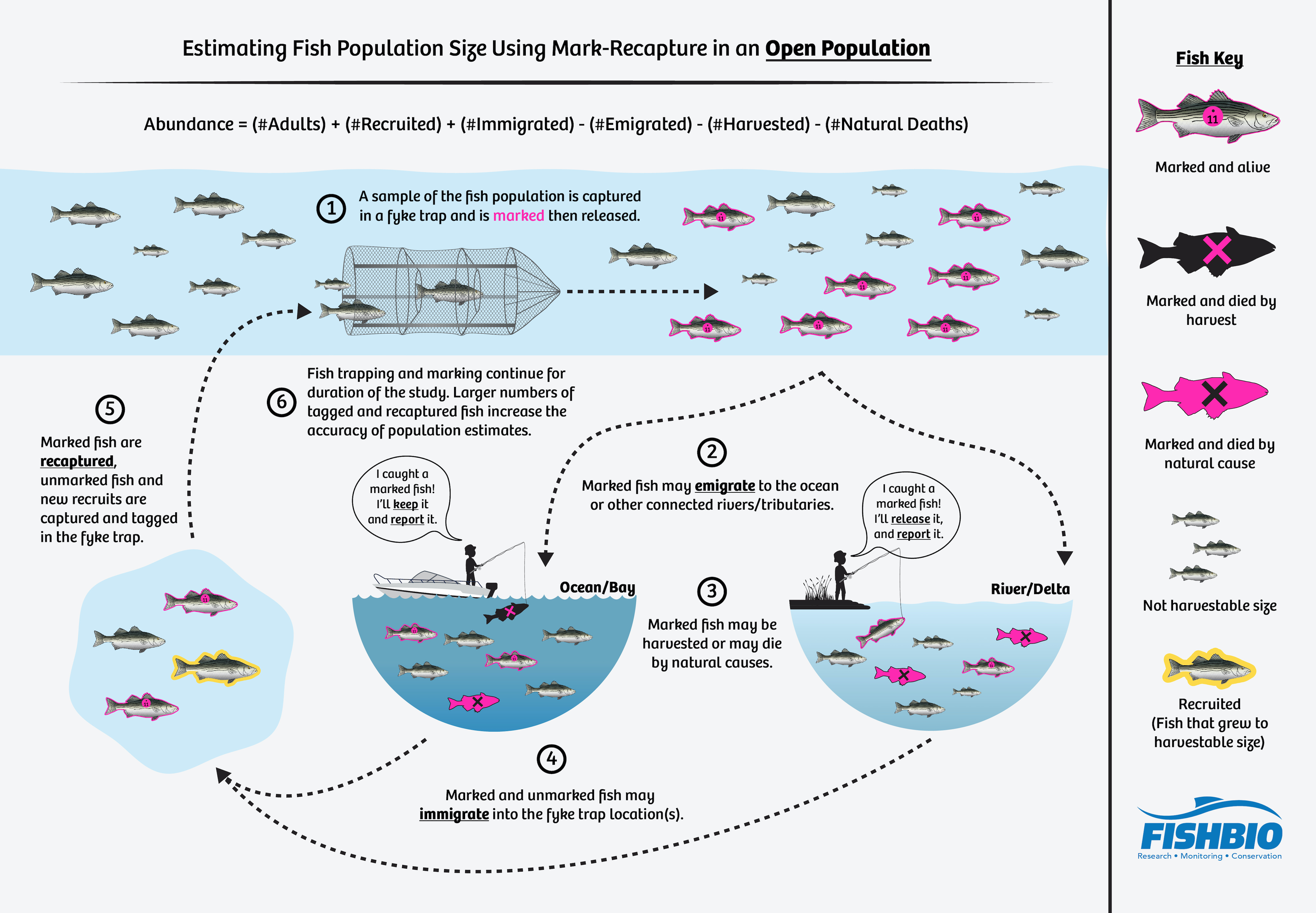 In a large-scale mark-recapture study, such as our ongoing study to estimate the striped bass population size on the San Joaquin River, researchers have to sample over extended time periods and rely on a variety of data types. As illustrated in the infographic above, when we catch striped bass in large fyke traps in the San Joaquin River, we mark them with external disc tags and also implant PIT tags. Each type of tag has a unique identification number specific to that fish. The data we collect on unmarked and marked fish at the fyke traps give us information on how many new fish are entering the sample area (recruitment). When anglers catch a marked bass and report the tag number, this provides information on where the fish moved, and also whether or not the fish was harvested. Data from reported tags are used to estimate migration rates as well as harvest mortality. Although not part of our current study, acoustic tags that use soundwaves to detect fish movement and survival can also be used to estimate migration rates and natural mortality. 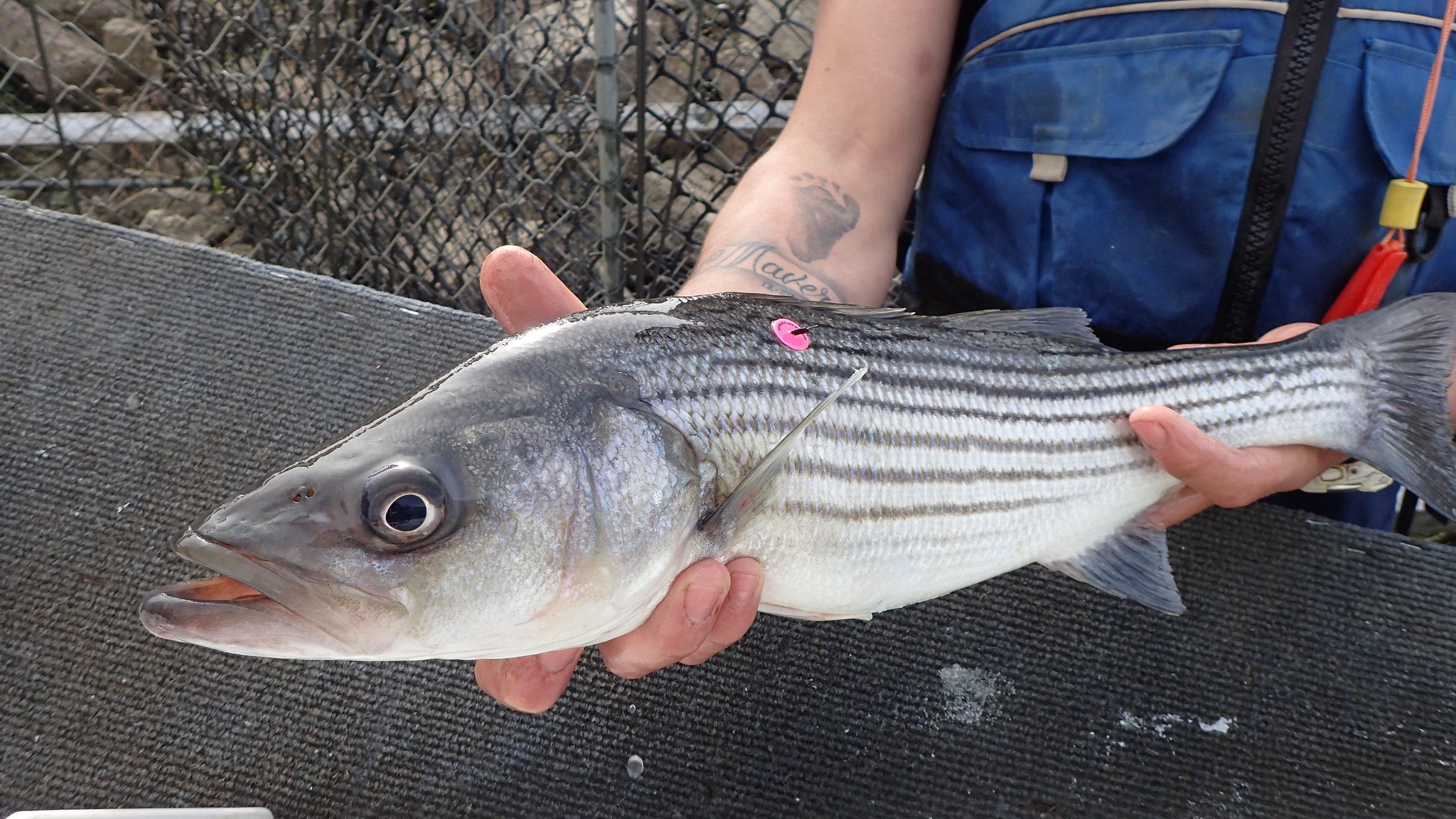 Fish population sizes are not static, they change from year to year for many reasons. In some years, recruitment may be high and mortality (both natural and from harvest) may be low, resulting in high abundance. In other years, recruitment may be low and mortality high, resulting in low abundance. Managing a sustainable fishery not only depends on having accurate estimates of the population size, but also understanding which environmental factors affect recruitment and natural mortality, in addition to accurate estimates of how many fish are harvested. Long-term mark-recapture studies along with angler assistance can provide these data needed for sustainable fisheries management.