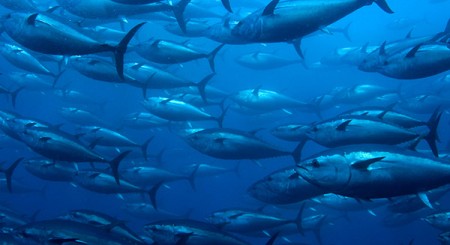 Similar to bugs buzzing around a light in the dark, fish will flock to a floating object or structure in the vast emptiness of the open ocean. The tuna industry has learned to exploit this behavior to make tunas easier to catch with the help of Fish Aggregating Devices, or FADs. Whether it’s a large, bobbing buoy anchored to the sea floor or a long, drifting net attached to a satellite beacon, a FAD lures fish to a localized area. A fishing boat can then encircle the FAD with a net like a purse seine and scoop up everything underneath (see video below). FADs have generated controversy in recent years because of their increasing use–and the fact that they just work so well.

Researchers recently announced that the estimated number of FADS in the ocean ranges from 47,000-105,000 (Baske et al. 2012). Some scientists and managers worry about these large numbers because they fear the devices make it too easy to overexploit already struggling tuna populations–like fishing in a barrel. Of particular concern in the Pacific Ocean are the juvenile bigeye tuna (Thunnus obesus) that tend to congregate around FADs (Lennert-Cody et al. 2008). Catching large numbers of these young fish that haven’t had time to reproduce makes it difficult for the population to recover. FADs also attract many other species besides tuna, and fishing nets indiscriminately ensnare them all, leading to the unintended deaths of animals like sharks, sea turtles, and billfishes.

The issue of FADs divided attendees at the recent meeting of the Western and Central Pacific Fisheries Commission, a multinational organization that manages tunas in the Pacific Ocean. Some hoped to increase the current three-month annual ban on FADs in the Pacific (July to September) to four months, but others argued an extension would hurt the fisheries of small Pacific nations. In the end, the Commission decided to extend the ban to four months. The fishing industry is not currently required to report their use of FADs, and many scientists are concerned about this lack of oversight. Researchers want to know how many FADs are out there, and when, where, and how they are being used, to better understand their impacts on tuna and other species. Though the popularity of these devices is on the rise, some hope this is one fad that will quickly go out of style.