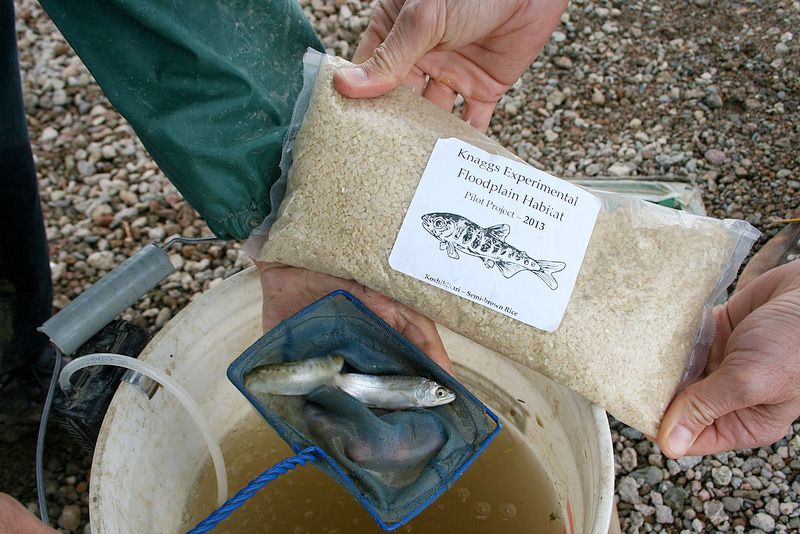 Can fish and farms coexist in harmony? Scientists are currently trying to answer this question in the Yolo Bypass, a roughly 60,000-acre expanse of engineered seasonal floodplain habitat that sits upstream of the Sacramento-San Joaquin Delta in California’s Central Valley. This unique area was developed in the 1930s as a bypass for water from the Sacramento River to reduce the risk of flooding in the Sacramento area. It generally floods in the winter or spring when waters from the Sacramento River overflow the Fremont Weir. When the bypass drains in the late spring, the land is used for agriculture (most notably rice farming) and grazing. In recent years, biologists have begun to recognize the area’s importance as winter aquatic habitat for birds, fishes, and other wildlife (Sommer et al. 2001, Feyrer et al. 2006). As part of the Cal-Neva American Fisheries Society annual meeting, held last week in Davis, CA, the Department of Water Resources (DWR) and CalTrout hosted a tour of the Yolo Bypass for fellow fisheries biologists. 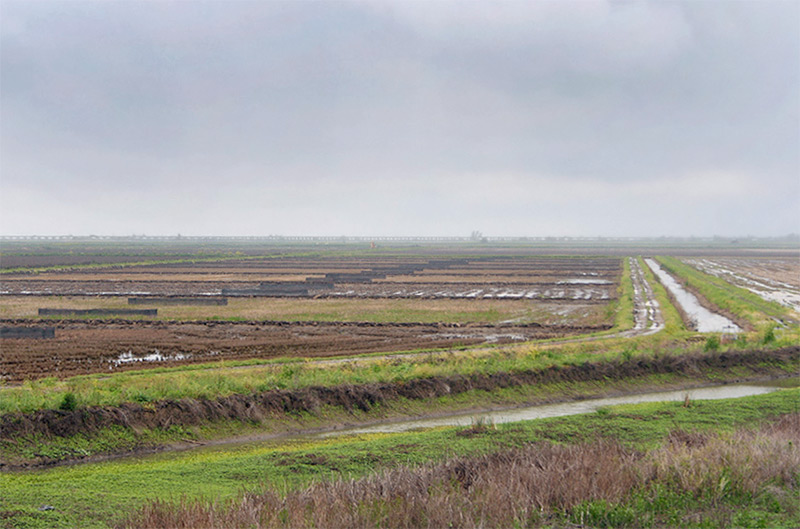 A highlight of the tour was stopping by Knaggs Ranch, located just north of the City of Woodland. CalTrout, DWR, and UC Davis have launched a study here investigating the potential to combine current agricultural practices  with floodplain habitat for fish and wildlife in the Yolo Bypass, dubbed “The Nigiri Project” (i.e., “fish on rice”), which has recently received a lot of press. Jacob Katz, from CalTrout and UC Davis, showed off the project site. Researchers have teamed up with farmers to investigate whether productive rice fields farmed during the summer can be managed in the off-season to provide winter habitat for juvenile Chinook salmon. The expansive habitat and somewhat regular flooding events in the Yolo Bypass offer a unique opportunity to test this rotation. They are just finishing the second year of the project, and rice grown on the experimental plots during the first year was harvested last fall (see top photo). Over the past two years this project has documented impressive growth of salmon that lived on the experimental habitat for six weeks: last year they recorded a five-fold weight gain, one of the highest growth rates for Chinook in the region. In 2013, fish were raised in various plots where the rice stubble left over from last year’s harvest was treated in different ways (e.g., stomped down, left as stubble, disked, or fallowed). The team is currently analyzing the results of the rice treatment portion of the study to see if fish benefit from particular rice stubble modifications. The AFS tour attendees observed the study fish before researchers released them into the river.  The fish are outfitted with acoustic tags so scientists can track their survival and migration to the ocean. Project participants are touting the collaboration as a rare win-win-win situation, with benefits for agriculture, wildlife, and flood protection.