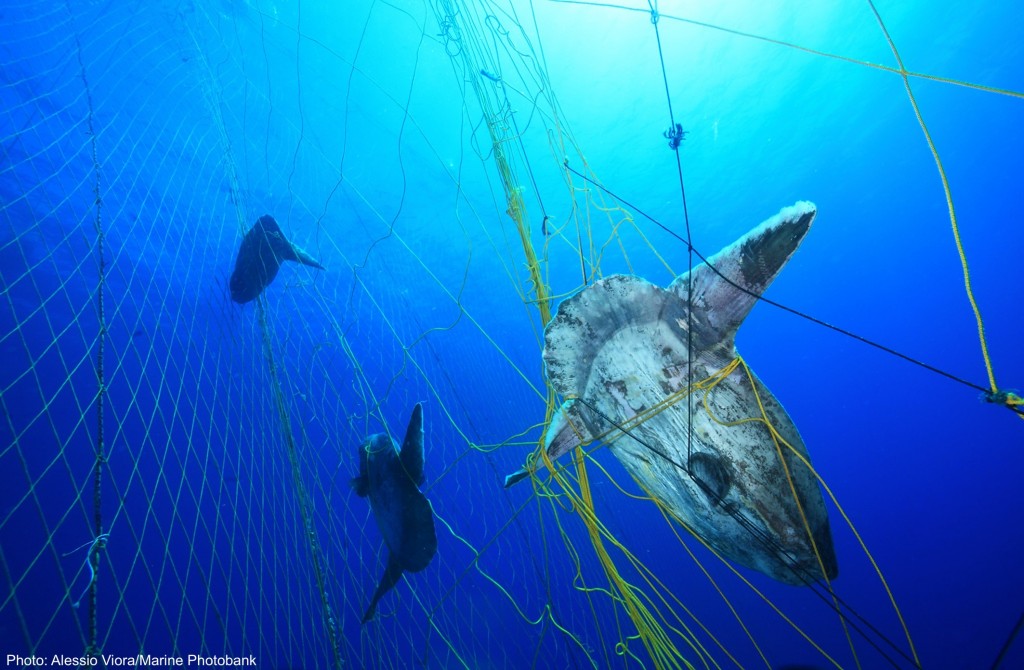 The relationship between commercial fishers and their target fish species is rarely one-to-one. Commercial ocean fishing is often a wide-sweeping, messy affair, where dozens of non-target species can get caught in the crossfire – everything from fish and turtles, to sea lions and whales. As fishing gear has become less selective, fishers are throwing back massive volumes of animals that they don’t want or can’t sell – usually dead. Some accounts suggest this non-target “bycatch” makes up 40% of the world’s fishing catch (Davies et al. 2009), and as many as 650,000 whales, dolphins, seals, and sea lions are killed in bycatch every year (Reed et al. 2005). A recent spate of reports and papers highlight the issue of bycatch, and call for solutions to address this collateral damage of the fishing industry. Not only does bycatch contribute to the decline of many species, it reflects the sheer wastefulness of some fishing practices, adding to the global threat of overfishing.

Humans aren’t the only ones out to catch fish, so it’s no surprise that our fisheries overlap with the feeding grounds of other animals. In fact, tuna fisheries used to deliberately set their nets around hunting dolphins to catch the fish nearby – killing many dolphins in the process. Bycatch can also result from animals getting snared in lost gear still fishing at sea, known as “ghost fishing.” A recent scientific paper in the journal Proceedings of the National Academy of Sciences offers the most comprehensive picture of the global bycatch problem among marine megafaua, or the “air breathers,” including sea birds, sea turtles, and marine mammals. The authors reviewed three common gear types, and concluded gillnets caused the highest bycatch “intensity” (a combination of fishing effort, bycatch rate, and species information), followed by longlines, then trawls. Sea turtles experienced the highest bycatch intensity, followed by marine mammals, then seabirds. The team also identified bycatch “hotpots” where cumulative effects of multiple gear types affect a range of species, including the Mediterranean Sea and southwest Atlantic Ocean. Without looking at bycatch holistically, the authors point out, changing fishing practices to protect one species could end up harming another.

A recent report by the Natural Resources Defense Council (NRDC) highlighted the extent of marine mammal bycatch that occurs in foreign fisheries exporting seafood to the United States. The authors call on the National Marine Fisheries Service to enforce a provision of the Marine Mammal Act that requires seafood imports to come from fisheries that do not kill marine mammals in excess of U.S. standards. The report reveals how fisheries in Canada, the Mediterranean, and Asia, among others, are catching marine mammals at a concerning rate. Bycatch is considered a main cause of population decline in many long-lived, slow maturing megafauna populations – and in some cases, is the number one threat, such as the rare vaquita porpoise in the Gulf of Mexico. The gold standard for monitoring bycatch is to institute independent observer programs, where onboard observers record the extent of bycatch. While such programs could prove costly in developing countries starting from scratch, the report argues that the multibillion dollar seafood industry ought to spare some resources to address these challenges.

Holding our international seafood suppliers to a higher standard would level the playing field for domestic fisheries, which have had relative success in reducing mammal bycatch. However, U.S. fisheries still have clean-up work to do when it comes to discards. Oceana recently released a report identifying the nine “dirtiest,” or most wasteful, fisheries in the United States. Drift and set gillnet fisheries in California, as well as shrimp trawl and snapper longline fisheries in the Southeast, throw away a whopping 60% or more of what they catch. Instituting bycatch caps in all fisheries and providing incentives to switch to less destructive gear are some suggested solutions. And all the recent reports stress that more information is needed: accurate reporting will be a crucial step in understanding the true extent of bycatch and holding fisheries accountable. As Oceana’s report suggests, it’s time we start counting everything we pull out of the sea – because everything counts.