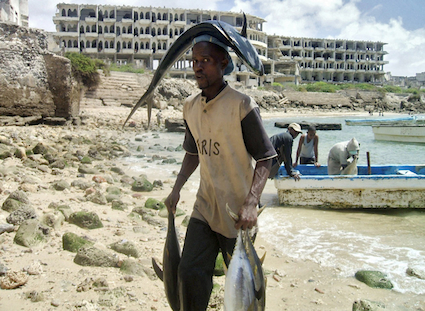 From high-profile hostage situations to terrorizing the coasts, is it possible that there’s a good side to Somali pirates? Local fishers in Kenya and Somalia think so. Several years of violent activity by Somali pirates off the east coast of Africa have led to a substantial reduction in the hefty illegal harvest of fish by international commercial vessels. Illegal commercial fishing has been a problem for years, but East African governments often lack the resources to patrol the oceans. Now, Somali pirates have been filling this gap unwittingly. As the pressure on fish stocks from illegal commercial harvests has reduced, local fishers say their catches have been climbing. They claim that many of the valuable fish that disappeared from their catches, such as red snapper, are now being caught in high numbers. While short-term benefits from piracy may be perceived by local fishers, the Kenyan Ministry of Fisheries Development states that piracy has not had a large impact on the total fishing industry because most of their catch comes from Lake Victoria. Pirates do torment locals at times, and piracy limits the potential for Somali and Kenyan interests to further develop their ocean fisheries. However, this unexpected phenomenon has demonstrated the immense impacts that illegal international fishing vessels can have on developing nations like Kenya and Somalia.