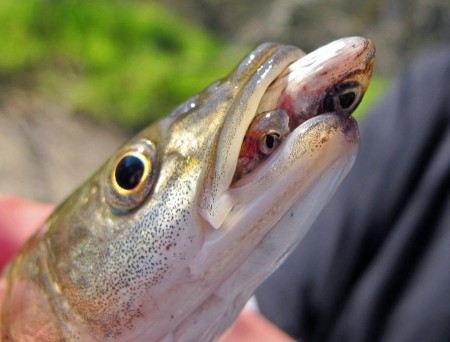 Predation by large, non-native predators on salmon and steelhead outmigrants has received a lot of popular press in California’s Central Valley over the last year. Certainly there is considerable evidence that large predators prey heavily on native salmonids, especially at and around water diversion facilities and other structures in the lower tributaries and Delta. However, sometimes we forget one of nature’s rules: big fish eat smaller fish. In this case the big fish is a 9 inch (220 mm) native Sacramento Pikeminnow (Ptychocheilus grandis); the little fish are 5 Chinook salmon approximately 1 to 2  inches in length. Although the Pikeminnow is fat and happy, or he was before we caught him, his full stomach today is an indication how much fish can eat, but may not be indicative of his predatory success on any given night. This “predation” occurred while temporarily confined in a fish trap, where juvenile Chinook and other small fish are easy prey. A number of measures are taken to minimize such losses, but failed on this particular night. 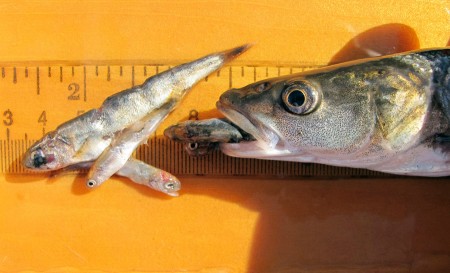