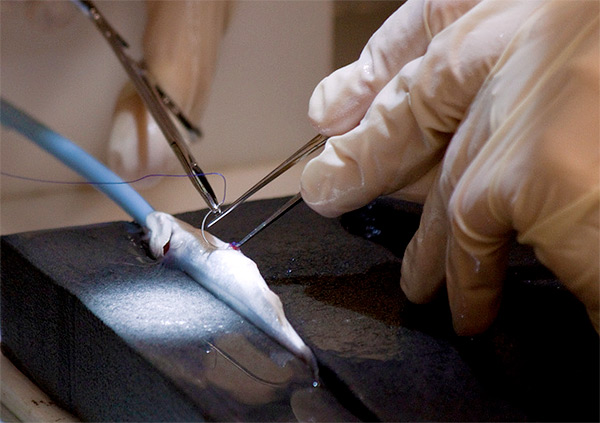 One of the most intensive fishery studies ever conducted in California’s Sacramento-San Joaquin Delta culminated in 2011. The twelve-year study, known as the Vernalis Adaptive Management Program (VAMP), was a multi-organization effort designed to evaluate and improve the survival of salmon smolts migrating through the San Joaquin River Basin. The study investigated how salmon survival may be affected by changes in environmental variables such as river flow and water exports. A technical report summarizing the 2011 results is now available online.

FISHBIO collaborated with a number of other groups to tag, release, and track fish for VAMP (see Follow that fish). In 2011, a total of 1,895 Chinook salmon smolts and 2,195 steelhead smolts were surgically implanted with acoustic tags and released into the San Joaquin River at Durham Ferry. Fish can take multiple pathways through the Delta to the ocean, and the choice of route can affect their survival. Acoustic receivers were deployed throughout the Delta to calculate route-specific survival, and mobile tracking was conducted to determine where mortality was greatest. The two investigated routes were Old River, which heads toward water export facilities and fish salvage facilities, and the main stem San Joaquin River, which historically has had greater survival (Brandes and McLain 2001). Of the two routes that Chinook salmon selected in 2011, Old River had greater survival (4%) than the San Joaquin River (1%). The overall 2011 survival of 2% is consistent with other studies that show smolt survival has been declining in the Delta. Coded-wire tag studies between 1994 and 2001 indicated that survival through the Delta ranged between 15% and 50%. However, CWT and acoustic studies since 2003 have shown survival to be lower than 12% in the south Delta.

The development of acoustic telemetry technology has completely transformed our ability to study fish movement and survival. Biologists can now track the migration of individual fish throughout the Delta and even determine approximate locations where fish are likely eaten by predators. This has identified key mortality areas in the Delta and may help us understand why survival has declined so drastically over the last decade. The use of mobile tracking during the VAMP study helped identify locations where tags accumulated, presumably from predation. Three locations were identified as predation “hot spots”: 78 tagged smolts were lost at the the Stockton Deep Water Ship Channel on the San Joaquin River, 48 at the Grant Line Canal, and 37 in front of the trash racks at the Tracy Fish Facility in Old River. Previous years’ data suggests that the scour hole near the head of Old River and a railroad bridge in Stockton are also areas of high fish mortality on the San Joaquin River (Vogel 2010). Continued smolt outmigration monitoring studies and an increased effort to monitor non-native predator populations may help us solve some of the fish survival issues that have plagued the Delta for so many years.