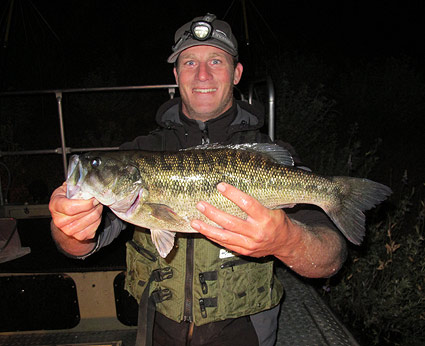 Frequently misidentified by anglers, the Spotted Bass (Micropterus punctalatus) is often confused with its larger cousin the largemouth bass (Micropterus salmoides). The fish are similar in appearance, with spotted bass typically having rows of black spots on the lower half of the side of the body. However, factors such as water clarity and the depth they inhabit can affect coloration. Spotted bass (max length 20 in.; max weight 10 lbs) don’t get as large as largemouth bass (max length 30 in.; max weight 22 lbs). The spotted bass pictured here (top photo) was 20 inches long and 4.74 pounds whereas the largemouth (middle photo) was 22.5 inches and 10.14 pounds. Although spotted bass and largemouth bass are similar in appearance they tend to occupy different habitat. Where largemouth are structure-oriented fish, spotted bass do not generally rely on cover and they inhabit much deeper water than largemouth bass. 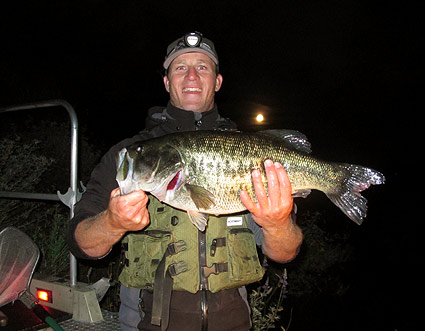 Spotted bass are native to the Mississippi river basin, but have been stocked throughout the western states. In California the spotted bass was first held at the experimental Bass Hatchery at Friant, which may have resulted in escapees making it into the San Joaquin River as early as 1936, but was intentionally planted in the Tuolumne River in 1937. The California Fish Commission (CDFG) intentionally introduced spotted bass for sportfishing. They were also reintroduced in the 1970’s to improve the sportfishery. They are now found in most lakes and reservoirs west of the Sierra Nevada. 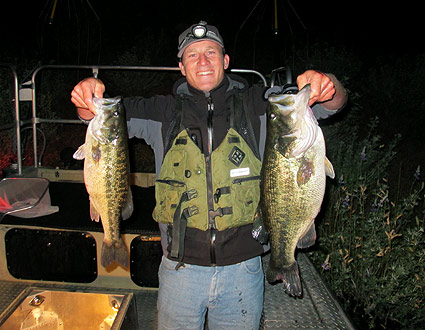