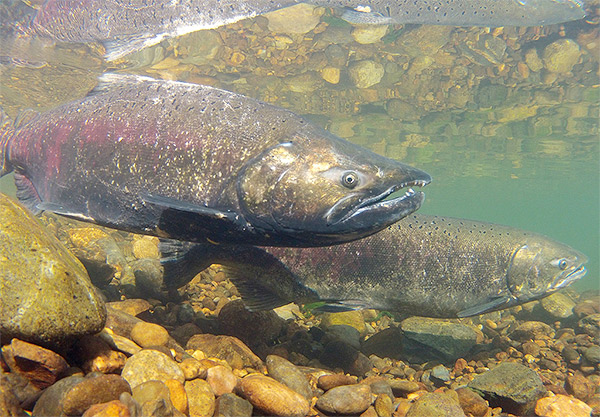 Each year, salmon managers for the Columbia River try to peer into the future and foretell the number of adult spring Chinook that will return to spawn. They use this crucial prediction to divvy up salmon harvest quotas among commercial, recreational, and tribal fishers. Now, scientists have found a way to improve the fish forecast: harnessing the predictive power of ocean conditions. Once juvenile salmon leave their freshwater streams and enter the ocean, the culling that occurs in the first brutal months largely sets the number of fish that grow up and return to spawn in two or three years (Beamish and Mahnken 2001, Wells et al. 2008). The ocean is a complex and shifting arena where many poorly understood factors can make or break a teenage salmon’s shot at survival. In a paper published in the journal PLOS One last month, scientists from the National Marine Fisheries Service and Oregon State University identified key ocean factors, such as the abundance of prey and major ocean trends, that can better predict the number of fish that will live to make a river homecoming.

To determine which of the ocean’s biological and physical conditions most influence Columbia River spring-run salmon survival, the researchers gathered up 31 datasets, or indicators, and divided them into five basic categories. These included large-scale ocean and atmosphere factors; smaller-scale local or regional factors; fish growth and feeding; predation and disease; and measures of cohort abundance. They tossed everything into a statistical model that could analyze multiple sets of data at once, and calibrated the model using the numbers of returned salmon from 2000-2009. While no single variable distinguished itself as the best crystal ball to foretell salmon returns, some groups of indicators stood out as more important. Eating and bulking up are key in this fish-eat-fish world. Leading indicators included the abundance of planktonic salmon prey, such as copepods and fish larvae, as well as measures of salmon diet and growth. The scientists concluded that switching from feeding on plankton to fish soon after they enter the ocean, between May and June, plays a large role in deciding which juvenile salmon will clear the hurdle to adulthood.

Big-picture processes, such as large-scale patterns of ocean temperature, also heavily contributed to predictions of salmon survival, more so than local or regional measurements of temperature and salinity from Oregon and Washington. This may reflect the influence of widespread ocean conditions on salmon prey. The scientists’ model proved quite accurate in its predictions: it came only six fish shy of nailing the 2011 adult spring-run Chinook returns to the Columbia River (which numbered just over 221,000 fish), and its prediction of 179,000 salmon in 2012 came far closer than other estimates to the actual number of 203,000. The study authors note that factoring in many of the complex relationships that govern a salmon’s ocean experience improves on the forecasts currently used to inform salmon management decisions, which typically rely on just one or two indicators. Their technique could prove a valuable tool for setting salmon quotas, and helps us better understand the conditions that give young salmon favorable chances to beat the odds.