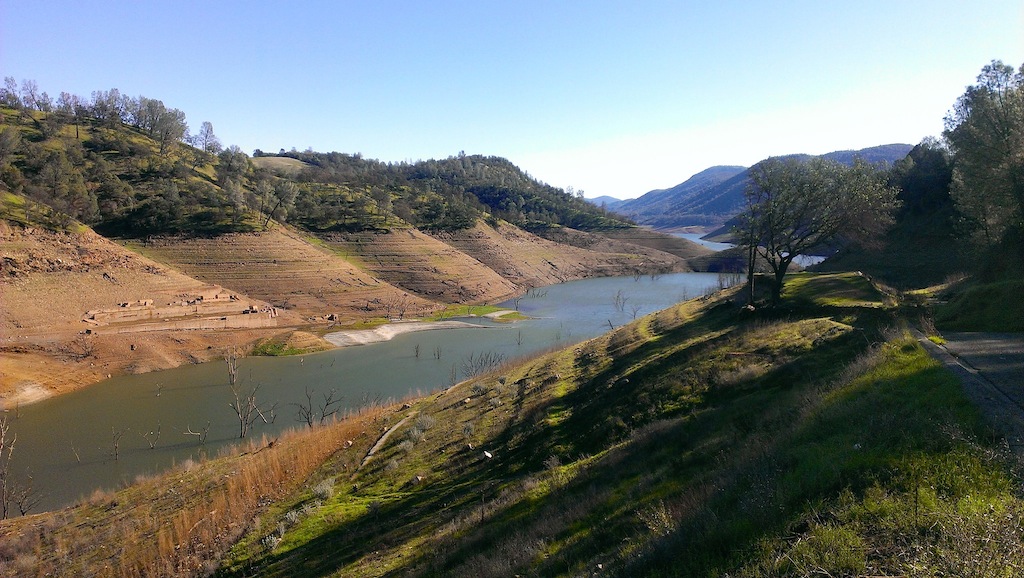 Rainfall throughout California last month marked a good start to the wet season, but the relief came unevenly across the state. The December deluge prompted us to take stock of California’s ongoing drought, as we did at this time last year. During the month of December, many areas in northern California received higher-than-average rainfall when an atmospheric river rolled through, easing drought conditions in some regions. San Francisco received 190% of its normal rainfall in December; however, a dry January means the city’s precipitation accumulation to-date now stands at 137% of normal. Northern California cities like Redding received 19.69 inches of accumulated rain, which represents more than half of the city’s normal annual precipitation accumulation (34.62 inches) — far better than the 3.58 inches that fell during the same period the previous year.

However, the San Joaquin Basin and Tulare Basin didn’t experience the same December downpour: although more than seven inches of rain fell in areas like Modesto and Stockton, the adjacent Sierra Nevada didn’t receive a similar above-average drenching. The California Department of Water Resources (DWR) precipitation indices currently show that while the Northern Sierra index is at 105% of average, the San Joaquin and Tulare Basins are just 56% and 59%, respectively. Statewide, accumulated precipitation through December is just above average (at 112%), and rain through this point represents 39% of the total annual rainfall received during an average water-year. 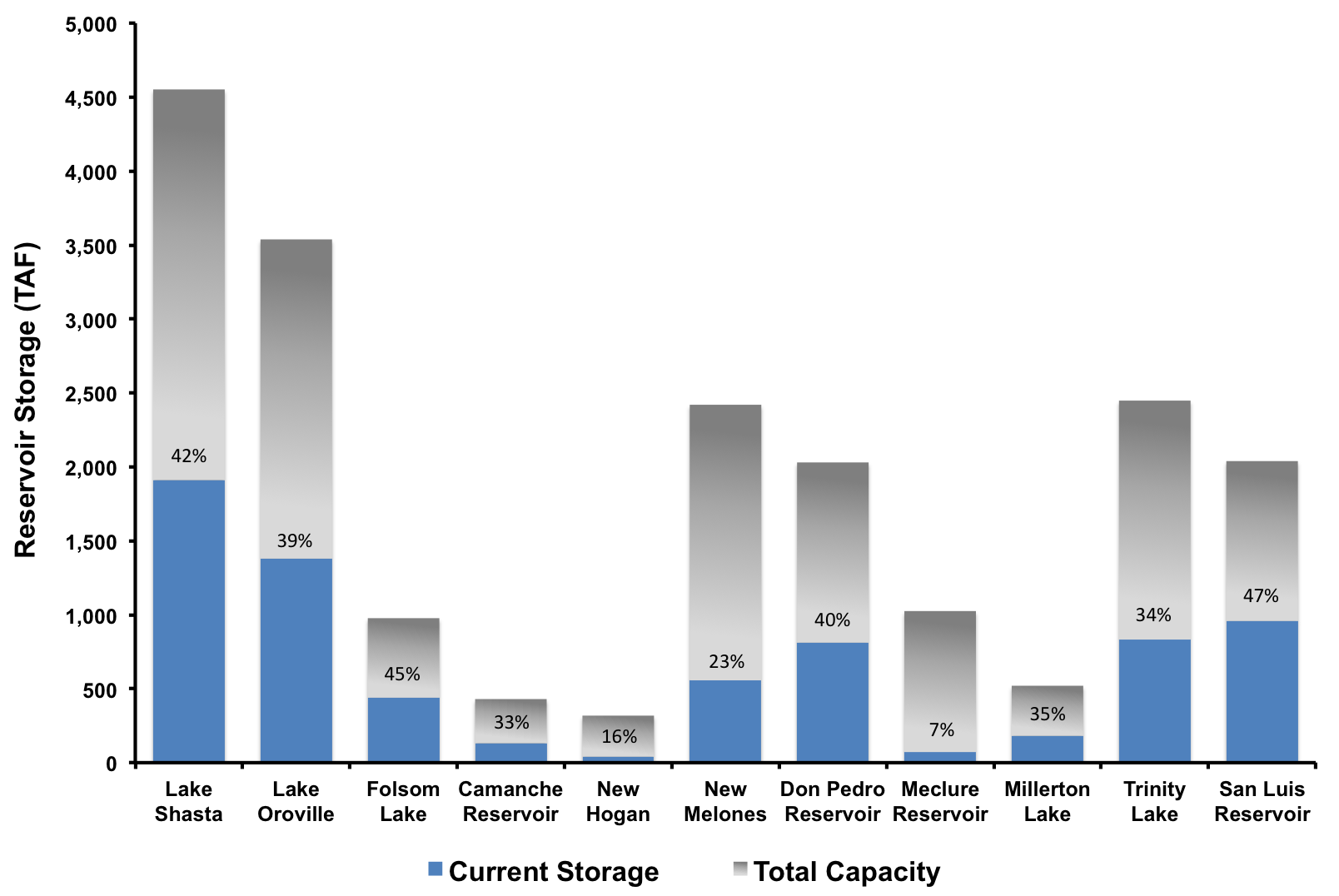 The statewide differences in rainfall translated into similar discrepancies in reservoir storage (see graph above). During the last month, reservoirs in the North State, like Shasta, Oroville, and Trinity, increased their storage by 12%, 7%, and 8% of total capacity, respectively. In contrast, reservoirs to the south, like New Melones, Don Pedro, and McClure, saw little or no change. Compared to the same time last year, Shasta is currently holding 274 Thousand Acre Feet (TAF) more water, Oroville is holding 108 TAF more, and Folsom Reservoir has 271 TAF more than last year. In the south, however, New Melones has only about half (53%) the water it held last year (down 496 TAF), Don Pedro is down 231 TAF, McClure is down 157 TAF, and Millerton is down 33 TAF from last year. While early rains have improved storage in the North State, southern reservoirs will need some help from rain and snow over the next few months.

As we have described before, California’s largest freshwater reservoir is the Sierra snowpack. Water stored in the snowpack, about 15 million acre-feet on average, replenishes mountain reservoirs as it thaws in the spring. Snowpack typically builds from October to March and gradually melts from April to July. April 1 is used as the benchmark for peak snowpack, and water managers use the snow accumulated to that point to predict spring runoff. Historically, a third of the state’s water supply comes from Sierra snowpack, but climate change and changing weather patterns are predicted to decrease snowpack by 25-40% by 2050. 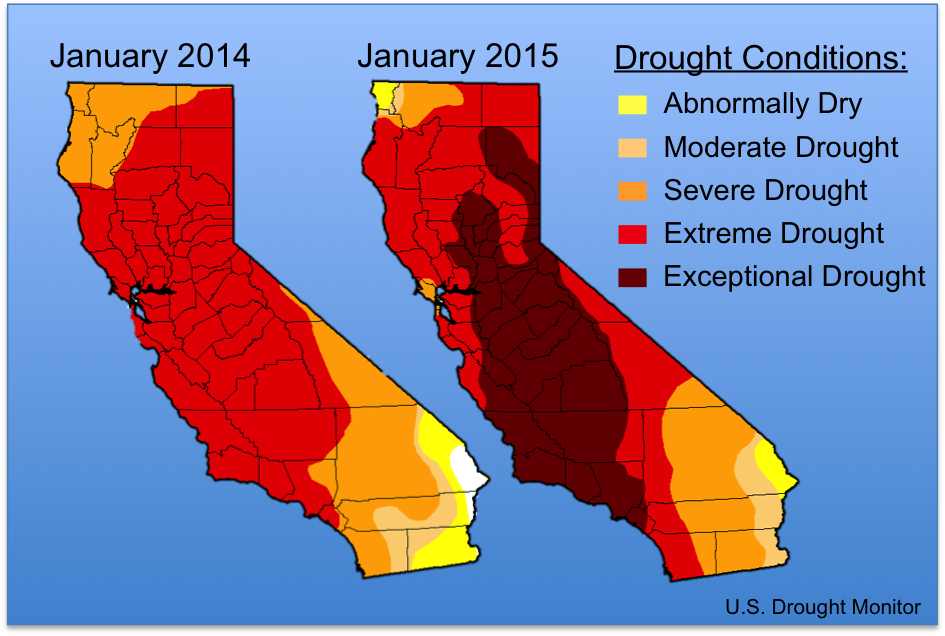 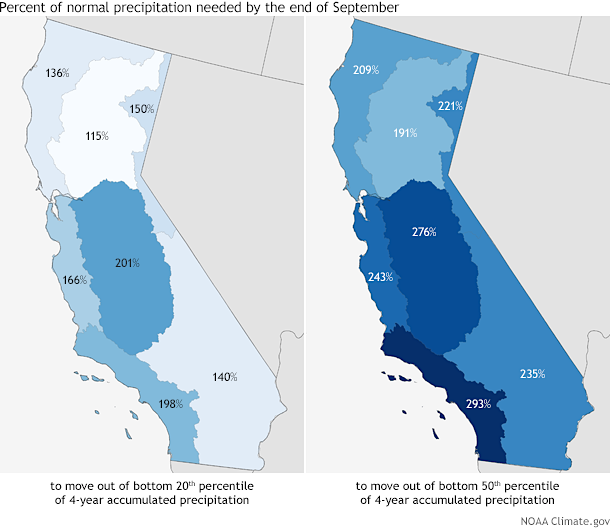 So will the drought (now in its fourth year) end anytime soon? That would require making up precipitation deficits in the Sierra Nevada of 30-50 inches. According to a NOAA Climate Center analysis in mid-December, California would require more than 100% of normal precipitation in all climate regions of the state to help push the last four-year period out of the lower 20th percentile of historical precipitation records (see left map above), which is one of the thresholds the Drought Monitor team uses to designate a drought. And even more incredible amounts of rain would be needed to reach the 50th percentile, or an “average” year (see right map above). One contributing factor to the drought is the record temperatures recorded in California. The winter of 2013/14 was the warmest on record, at 4.4°F above average, which smashed the previous record by 0.8°F. While this year is trending better than last, complete recovery will take time and likely require many consecutive wetter years to fill our significantly depleted reservoirs.