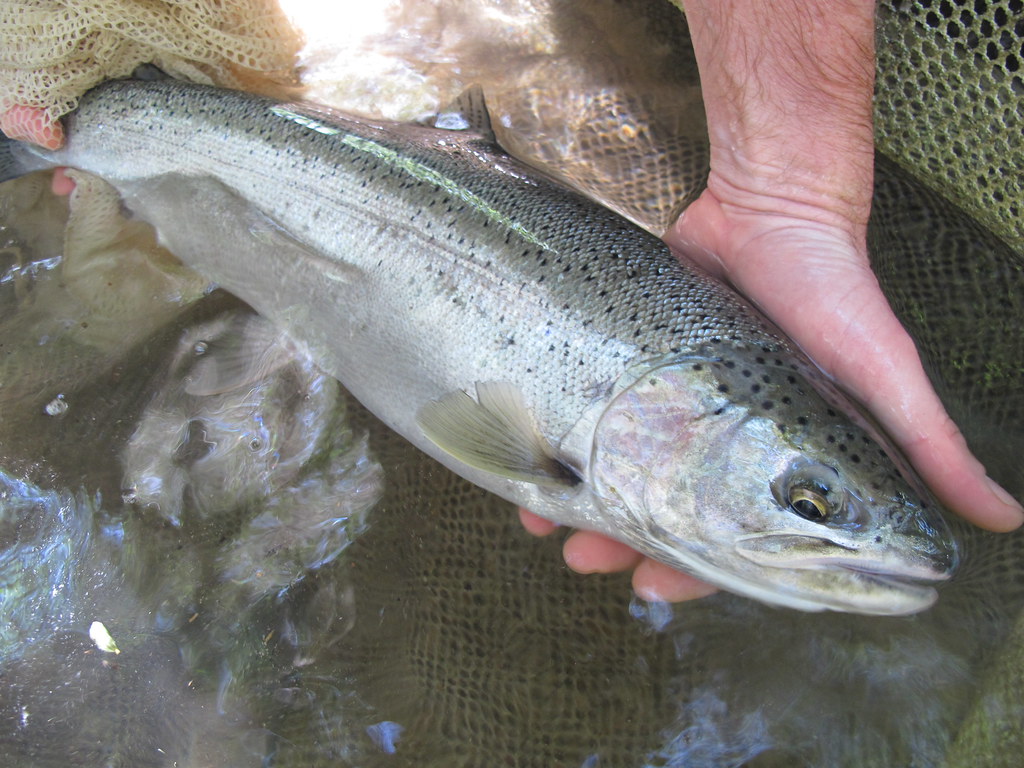 Steelhead, the migratory form of Oncorhynchus mykiss, are among the most difficult salmonid species to study and monitor. Unlike other species in the Oncorhynchus genus, such as Chinook salmon, steelhead do not die after returning to their natal stream to spawn. As a result, obtaining steelhead specimens in the form of carcasses can be very challenging, making it difficult to answer basic questions like whether adult steelhead are returning to the stream where they were born or straying to different streams for spawning. However, a recent study analyzing the carcasses of adult steelhead that were opportunistically collected in a small creek along the south-central coast of California has sought answers to some of these fundamental questions (Donohoe et al. 2021). The results of this study revealed that steelhead may be straying to streams hundreds of miles from their birthplace, much farther than generally thought.

Because steelhead do not always die after spawning, the lack of readily available carcasses makes it challenging to collect biological samples like otoliths (ear bones), the chemical composition of which can answer important questions about fish movements. For this reason, the opportunistic collection of seven adult carcasses from Big Creek on California’s Big Sur coast between 2006 and 2017 presented a unique opportunity to learn more about the migratory life histories of steelhead in this stream. Understanding how populations persist and fluctuate in small, coastal streams like Big Creek requires assessing interactions among populations throughout the region. This interaction often comes from adults migrating to spawn in streams other than the one in which they were born, known as straying. Analyses of steelhead genetics have indicated that there is indeed some level of genetic exchange occurring among populations in these streams, although exchange seems to diminish for streams that are farther apart.

Beyond genetics, straying can be measured more directly using otoliths, which serve as a microchemical fish travel log, as minerals incorporated into these ear bones as the fish grows reflect the chemistry of the surrounding water. Therefore, microchemical analysis of otoliths can allow researchers to tell where a fish was born, whether it migrated to sea, and even whether its mother was a resident rainbow trout or an ocean-going steelhead. The researchers of this study combined otolith analysis with broader scale geographic assignments from genetic analysis to more accurately determine where these seven adult steelhead on Big Creek had come from.

Genetic stock identification and otolith microchemistry results indicated that these seven individuals had come from at least six separate source populations. Three appeared to have come from nearby streams along the Big Sur coast, but remarkably another three came from populations as far away as the Klamath Basin (over 420 miles to the north) and potentially the Sacramento Basin (over 130 miles to the north). The origin of the seventh individual was unclear, but it also did not appear to have originated in Big Creek. Six of the individuals were female, which is in keeping with previous studies that have shown anadromy is more common in females, and all seven were also found to carry genes associated with migratory life history expression in the migratory-associated region of O. mykiss chromosome five (Omy05). Notably, otolith analysis indicated that one of these individuals was the offspring of a non-anadromous rainbow trout.

Although all seven individuals were strays, the authors emphasize that the small sample size and opportunistic nature of sample collection make it inappropriate to draw conclusions about the prevalence of straying in the Big Creek population. Despite these limitations, this study provided several valuable insights into steelhead population dynamics, including that steelhead straying can take place over very large distances. Additionally, this study was the first time that straying was demonstrated in a steelhead that was the offspring of a rainbow trout mother, which highlights the important role resident trout may play in promoting the resilience of partially migratory O. mykiss populations in small streams like Big Creek. Straying and flexibility of life history expression help connect populations and are likely to lower extinction risk. Understanding the actual rate and ultimate impacts of straying – whether positive or negative – in this stream will require further research, but this study is an important first glimpse into the coastal wanderings of steelhead.