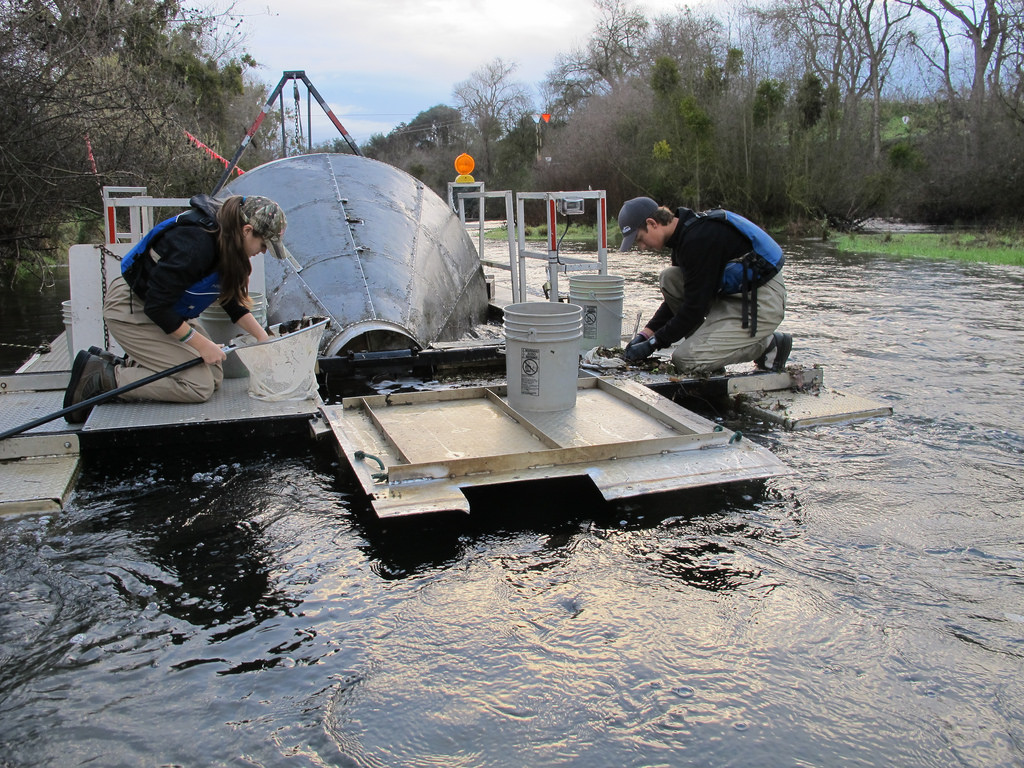 Compared to counting adult salmon returning to rivers to spawn, counting their offspring is a lot harder than you might expect. Not only can a few adult salmon produce thousands of offspring, the tools that we use to count baby salmon also come with their own sets of challenges. The essential conundrum is that, unlike adult salmon, we cannot feasibly catch and count every juvenile salmon in a river. Instead, we have to make estimates about how many young salmon are born and surviving each year based on sampling a portion of their population. But if we can never know the true number of individuals, how do we know if our estimates are accurate or not, or are even close to the true value? FISHBIO scientists published a paper in the latest issue of San Francisco Estuary and Watershed Science that looks at the challenges affecting the long-term juvenile fall-run Chinook monitoring program on the Stanislaus River and identifies ways to improve annual migration estimates (Pilger et al. 2019). The new study provides an example that similar monitoring programs can use to critically evaluate their population size estimates.

When it comes to counting adult salmon, we have the benefit of semi-automated technology, the Riverwatcher, that can count every single fish if we can funnel them through a weir. For counting juvenile salmon, however, we rely on continuous sampling using rotary screw traps. As we have described in previous stories, in order to estimate the size of the juvenile salmon population, we have to determine a trap’s “efficiency,” or its ability to catch fish, which we do by marking, releasing, and recapturing fish. However, there are several statistical approaches that differ in how they treat the results of these efficiency tests. Although we have used the same calculation method to estimate juvenile salmon abundance for the entirety of the Stanislaus monitoring program, we wanted to assess our confidence in using this method. Two decades of monitoring has also given us an opportunity to dig into the data, reflect on the program, and ask, “How can we do better? 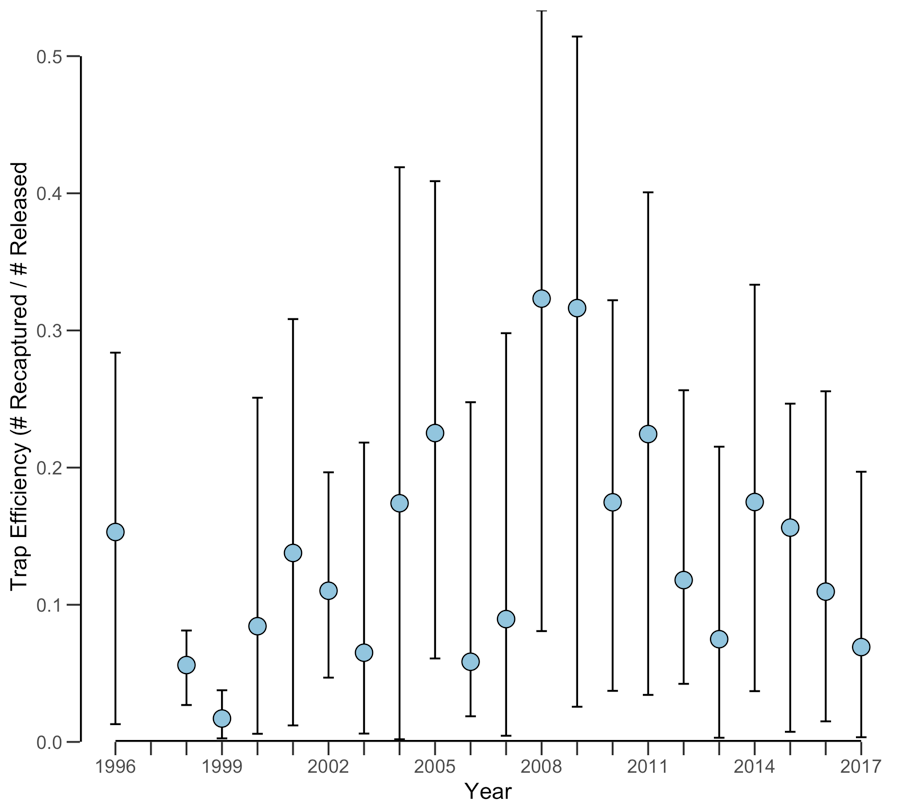 In the new study, we used data collected over 20 years from the Stanislaus River juvenile fall-run Chinook monitoring program to investigate the environmental factors that could influence a rotary screw trap’s efficiency and to further validate our abundance estimates. One obvious way to improve confidence in abundance estimates is to better understand trap efficiency, since the first depends on the second. As part of one of the longest running juvenile salmon monitoring programs in California, we have marked and released more than 160,000 young salmon to perform 387 efficiency tests. Similar to what other studies have found, trap efficiency can vary widely within a migration season (Figure 1), and it is most affected by river discharge. We also re-calculated abundance estimates for each year using different statistical methods, and compared these to our own estimates. Our reasoning was that if different calculation methods produced similar results for the same years, we could have greater confidence in those years’ estimates (Figure 2). Generally, we had greater confidence in our estimates for years with low juvenile production; however, it was reassuring that for years of high production, our estimates typically fell within the range of estimates from other statistical methods. Additionally, we compared our field protocols between years with high confidence in our estimates and years with lower confidence to identify ways to improve our monitoring. We found that starting monitoring earlier in the season can be beneficial, and performing more efficiency tests during the peak of the migration period led to more confidence in juvenile salmon population estimates. 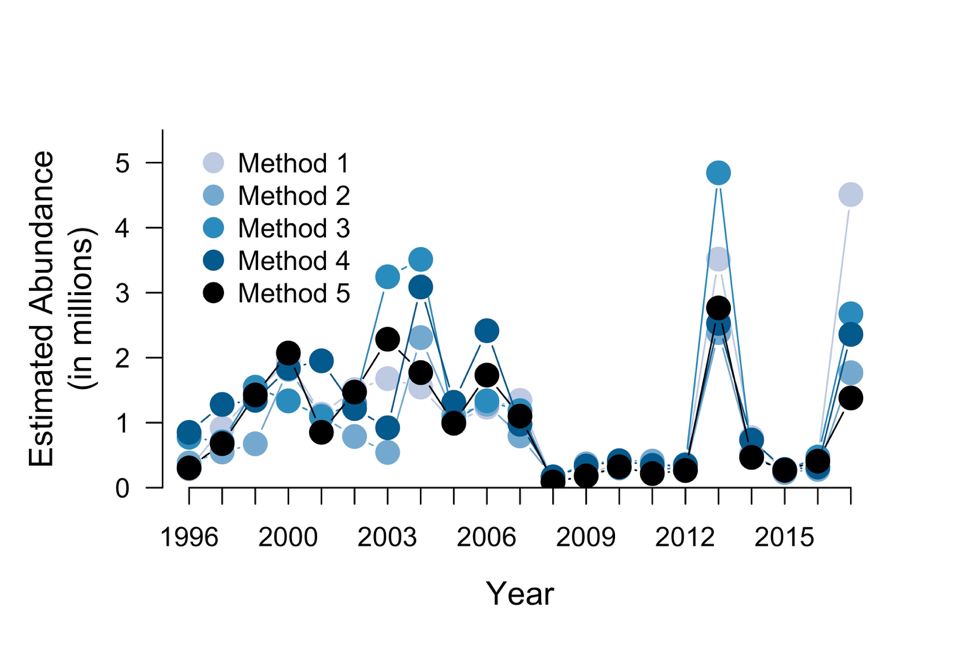 Just as the number of returning adult salmon varies from year to year, so does the number of juveniles. Trying to estimate abundances that change each year along with changing environmental conditions is a bit like trying to hit a moving target, but never knowing which way the target will move. This variability between years makes accurate estimates of juvenile salmon abundance all the more important to evaluate management actions in regulated rivers, just as with adult salmon. Rotary screw traps are also used to evaluate salmonid populations across the country. The challenges we address in this paper are not unique to any particular species, and we hope others can use our findings to help improve their own monitoring studies to ensure fish population estimates are closer to hitting the mark. Watch our new video about the paper’s findings!