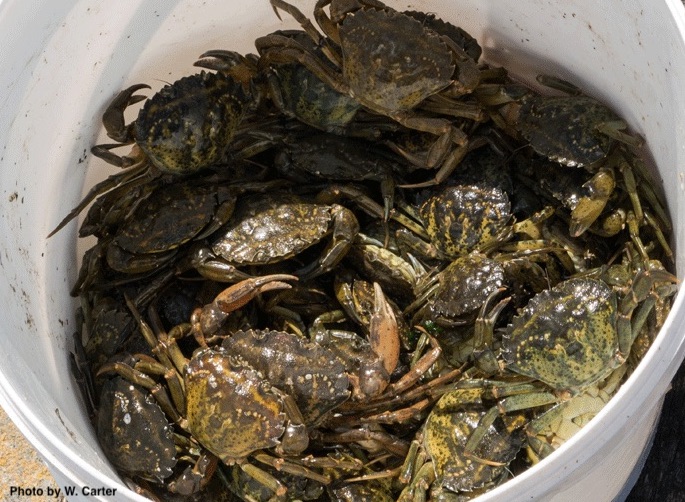 San Francisco Bay is considered the most invaded estuary in the world, in part due to its heavy ship traffic that transports species from other places. One unassuming but costly invader that has hitchhiked into San Francisco Bay is the European green crab (Carcinus maenas). Considered one of the world’s worst invasive species, these crabs feed voraciously on native invertebrates such as young oysters, clams, and even other shore crabs, which can have both ecological and economic consequences. The first evidence of European green crabs in America was found in the 1800s, when crabs were brought over to Cape Cod on a sailing ship. In 1989, European green crabs were spotted in San Francisco Bay and began spreading north, being observed in Oregon in 1997, Washington in 1998 and British Columbia in 1999. Researchers have been searching for ways to keep this invasive marine invertebrate in check, and may even have some unlikely allies in the restaurant sector.

Some may mistake the green crab for other Pacific Northwest crabs, such as the helmet crab (Telmessus cheiragonus), because the crab is not always green in color, and ranges from brown to dark green. One distinctive characteristic is the five spines located on the sides of each eye. The European green crab originates from the Atlantic coast of Europe and northern Africa, and tends to live in protected rocky shores, cobble beaches, sand flats, and tidal marshes. One European green crab can consume about 40 half-inch to 1-inch sized shellfish per day, and has the potential to out-compete commercially valuable Dungeness crab of approximately equal size for both food and habitat.

This means the green crab has the potential to jeopardize multi-million dollar commercial shellfisheries on the West Coast. In Tomales Bay, California, research has shown a decline in up to 40% of Manila clam harvest due to European green crab establishment (Grosholz 2001). Green crabs can also move to eat eelgrass deeper in the water, which is an important habitat for many juvenile fish, and they feed on young oysters, clams, mussels, and other shellfish commonly found in eelgrass. In contrast to the species they feed on, the green crab has no significant commercial value because they are small (less than 4 inches wide), and don’t yield much meat. However, researchers and chefs alike have been searching for solutions to make green crabs edible and stem their invasive tide, exploring everything from empanadas to frying the crabs whole.

If the European green crab problem goes unregulated, then local ecosystems and the economy will likely see long-term negative effects such as loss of biodiversity and nutrients in the marine ecosystem, and loss of revenue in the shellfish economy. The estimated total losses from green crab predation to commercial and recreational shellfisheries on the East Coast and eelgrass restoration efforts range from $18.6 to $22.6 million per year. Although losses to West Coast fisheries are currently negligible, they have the potential to increase to $844,000 per year (Lovell et al. 2007).  In contrast, the United States government spent only about $315,000 between 2007–2010 to manage the green crab problem.

Some actions can be taken to reduce the harm of this invader, although the approach is complicated.  In 2014, a team of researchers used traps to remove most of the larger adult crabs from Seadrift Lagoon in San Francisco Bay, but instead of solving the problem they created a bigger issue. It turns outs the adults cannibalize baby green crabs, and help control the population. The team adjusted their strategy to leave some adult green crabs present, and helped reduce the population by about 86%. Covering commercial shellfish with anti-crab nets can also effectively keep the crabs out (Feal and Kraus 2002).  However, the best way to stop an invasion like the European green crab is to prevent it from happening in the first place, which could be achieved with more detailed inspections of ship ballasts before they depart and arrive at ports. The European green crab problem is relatively recent and not much research on the long-term economic effects of these invertebrates has been done. Hopefully science will help shed some new light on the best approach for controlling these green invaders – which may include dishing them up for dinner.

This post featured in our weekly e-newsletter, the Fish Report. You can subscribe to the Fish Report here.  This story was written by Sarkis Kasparian for an internship with FISHBIO through the UC Santa Cruz Environmental Studies Department.