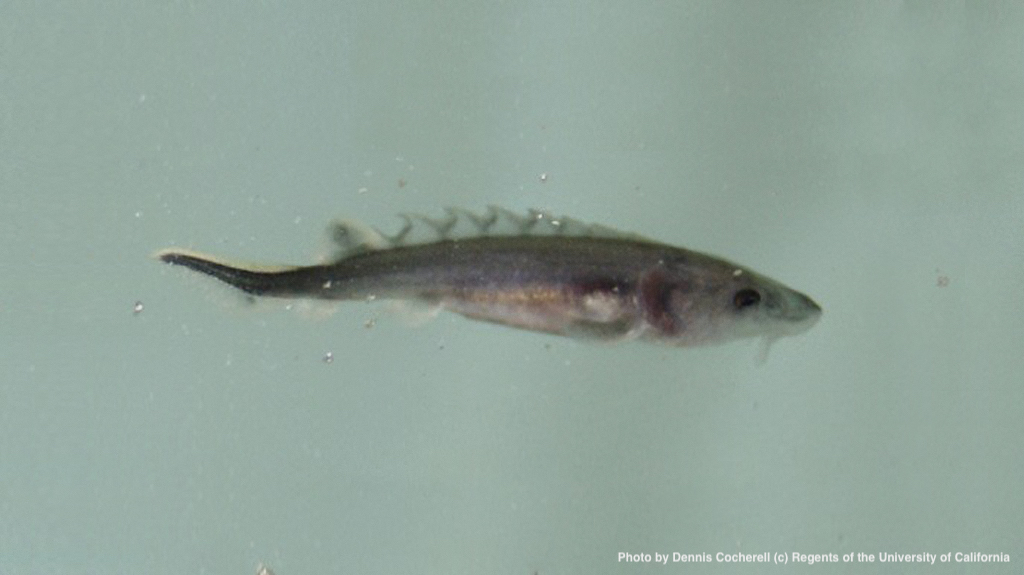 For little larval fish, access to high-quality prey is the key to growing quickly, and growing quickly is the key to survival. Baby fish rely on eating tiny invertebrates and plankton, and the abundance and diversity of this “fish food” can be influenced by the temperature and amount of flow in a river. Releasing cold water from reservoirs is an important part of managing salmon populations during the notoriously hot, dry summers of California’s Central Valley to increase flows and keep rivers cool. However, it’s not well understood how these releases may affect the little animals at the bottom of the food web, as well as the larval fish that depend on them.  Furthermore, few studies have examined the dietary needs of many fish species during their larval stage, and for some like the green sturgeon (Acipenser medirostis), which is listed as threatened under the Endangered Species Act, this lack of knowledge can hinder conservation. To fill this gap, researchers from UC Santa Cruz recently published a study assessing the diets of larval green sturgeon in the Sacramento River, which found that cool water releases may not necessarily have simple and straightforward benefits for all native fish species (Zarri and Palkovacs 2018).

The green sturgeon’s dinosaur-like appearance, long lifespan of 60 to 70 years, and massive size of up to 350 pounds makes it one of the more charismatic native fish of the Central Valley. But despite their imposing stature and ancient heritage, sturgeon are still vulnerable to the threats facing many other native fish in the region. Sturgeon, like salmon, move from saltwater into rivers to spawn, and they have lost access to much of their historic river habitat due to the construction of dams. Unlike salmon, which die after spawning, sturgeon may spawn numerous times throughout their life, and adults trying to return to an estuary after spawning in rivers may be stranded behind flood diversions when waters recede. Another complication is that the early life stages of green sturgeon are not well studied, and thus their needs are poorly understood. By analyzing the stomach contents of larval green sturgeon collected over a five-year period at a rotary screw trap near the Red Bluff Diversion Dam, the authors of this study were able to shed light on the dietary preferences of these baby giants, and how their eating habits changed as they grew larger.

The study found that the most common larval sturgeon prey included copepods (a kind of tiny zooplankton), and macroinvertebrates such as mayflies, midges, and blackflies. The scientists also noted an interesting diet shift: larval sturgeon consumed zooplankton and macroinvertebrates in roughly equal amounts until they grew to 30 millimeters in total length, at which point their macroinvertebrate consumption increased. This shift coincided with the young sturgeon losing their teeth (fun fact: unlike humans, sturgeon start out life with teeth and lose them as they grow older). The researchers went one step further by comparing the diet findings with records of stream flow and temperature to identify potential impacts of flow regulation. They found that collected sturgeon more frequently had empty stomachs when stream temperatures were colder, and noted that increasing flows resulted in sturgeon eating significantly fewer copepods. Since copepods were an important prey item for small larvae (<30 millimeters), higher flows may negatively impact these youngest sturgeon. While the controlled release of water from dams on the Sacramento River in the summer is important for sensitive fish like winter-run Chinook salmon and for human water users, it appears that the needs of other native fish species like the extraordinary green sturgeon may be more complicated, and understanding these needs is a key step in a holistic, adaptive approach to water management.