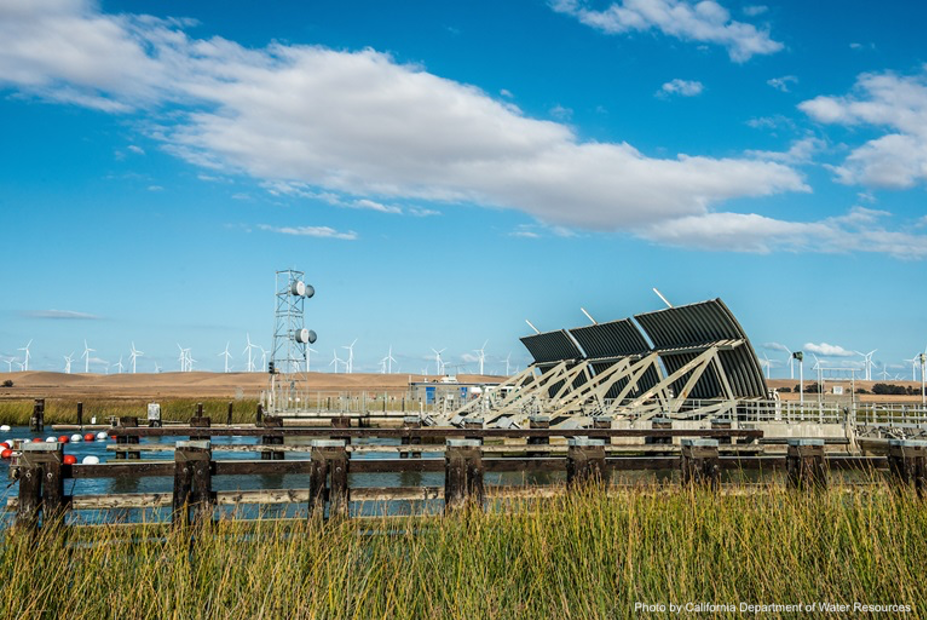 As delta smelt (Hypomesus transpacificus) continue to decline throughout the Sacramento-San Joaquin Delta, with recent population estimates numbering in the low thousands, novel approaches are being implemented to open up additional habitat for these imperiled fish. While many proposed conservation actions focus on habitat restoration, others focus on various environmental conditions preferred by delta smelt. As recommended in the California Natural Resource Agency’s Delta Smelt Resiliency Strategy (CNRA 2016), the Department  of Water Resources, in collaboration with other stakeholders, has been conducting a pilot research study to investigate how operational changes at the Suisun Marsh Salinity Control Gates affect delta smelt habitat conditions.

For the unfamiliar, the Suisun Marsh is the largest estuarine marsh remaining in the western United States, and tidal fluctuations bring in saline waters into the marsh with the flood tide and freshwater with the ebb tide. The marsh encompasses approximately 100,000 acres and has been drastically altered by decades of farming. Local duck hunting clubs have been working to reverse some of this alteration, although original diking by the clubs to create more freshwater habitat for game birds led to additional fragmentation and subsidence. The majority of the marsh area consists of diked wetlands managed for waterfowl, with the rest composed of tidal sloughs, marsh plain, and grasslands (DWR 2001). The salinity control gates at the heart of the study are situated at the eastern end of Montezuma Slough, one of the largest sloughs in northern Suisun Bay. These gates were originally built to control saltwater that was intruding upstream to prevent it from entering water diversions. The gates create a tidal “pump,” opening on the ebb tide to and closing on the flood tide which allows more saline water to enter the marsh, thereby inducing a net inflow of approximately 2,800 cfs of low salinity Sacramento River water into Montezuma Slough. Operation of the gates is currently determined by trigger salinities at monitoring stations throughout Suisun Marsh.

The pilot study seeks to determine the effectiveness of creating suitable habitat within the marsh during the late summer (i.e., August) and to examine smelt populations and distribution, as well as measure elements vital to smelt habitat such as water quality, flow, and food supply. Typically, in the summer, when the volume of water flowing out of the Delta is low, the marsh becomes saltier and delta smelt are less likely to be found in the habitat. Researchers wanted to know if operating the gates at this time of year to direct fresh water into the marsh would create lower salinity habitat, help delta smelt access better food resources in the marsh, and consequently improve growth and survival. Emphasis was placed on Suisun Marsh as it is key habitat for delta smelt and, depending on the findings of the study, the operation of the control gates could provide an effective tool to manage smelt habitat in periods other than the late summer. Normally, these gates are tidally operated during the control season between October and May and left open between June and September. In addition to fish and water quality monitoring, the study will also use modeling to map and quantify how the action affected the habitat available for smelt.

The most recent findings, presented to the Delta Stewardship Council in April 2019, suggest that this action was successful as delta smelt were encountered in the marsh during sampling after the gate operations began. As noted by Dr. Louise Conrad, all the other monitoring conducted suggested that smelt wouldn’t have been present without the gate operation, given previous years documentation. Further, as intended, the influx of freshwater created by the control gates during this period provided access to some brackish habitat that otherwise would have been too salty for smelt. Given these successes during the first year of implementation, the study intends to continue for multiple years.

Previous studies including Nobriga et al. 2005 noted that the distribution of delta smelt appeared to be shifting, as they were no longer commonly found in the central and south Delta where they were formally abundant indicating the constriction of formally suitable habitat. As indicated by Sommer and Mejia (2013), habitat itself is not necessarily the primary driver of population abundance and there is substantial evidence that delta smelt are controlled by a complex set of multiple interacting factors. While the reoperation of the tidal gates may appear to simply target habitat availability on its surface, it also enhances delta smelt food availability as it draws them away from the food source deprived Suisun Bay and into the food-rich marsh habitats. Projects like the pilot study, which may affect several inter-related individual metrics like turbidity, salinity, temperature and accessible food resources should be prioritized, as they address the complex ecological needs of the species. It remains to be seen if these operational changes can lead to substantial population level effects, but with delta smelt teetering on the edge of extinction, any progress is welcomed.