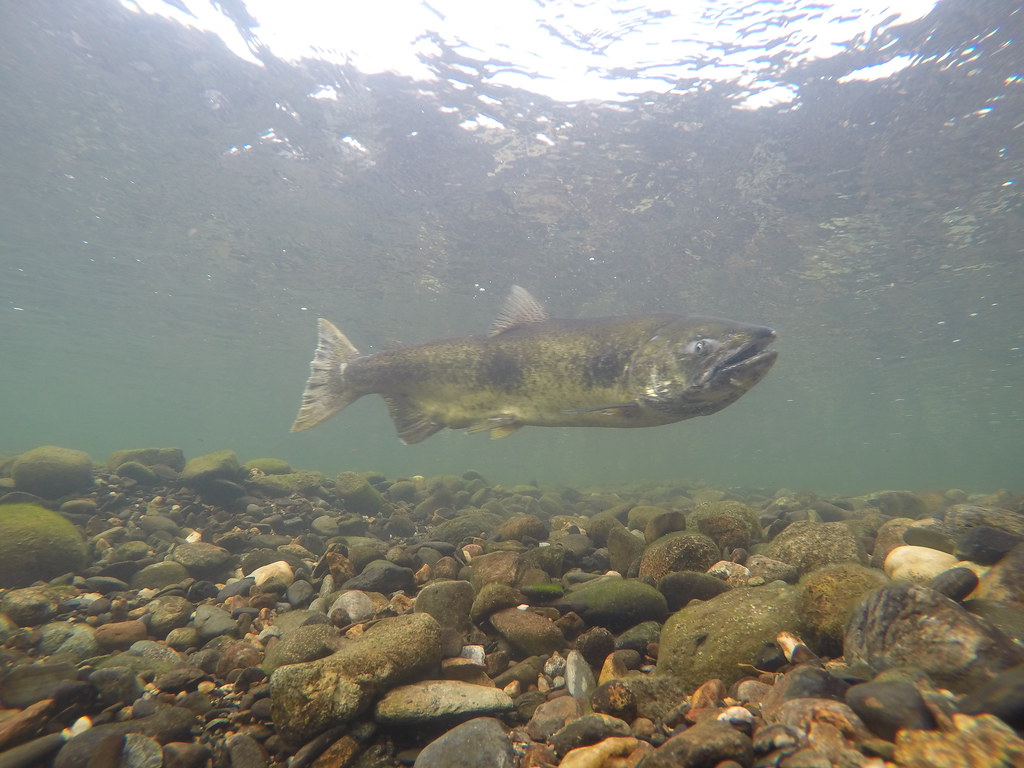 The full diversity of life doesn’t fit neatly into categories, but that hasn’t dissuaded humans from trying to split animals into manageable groupings like species, often on the basis of differences in physical appearance or behaviors. For salmon, species are further divided into “runs” or “ecotypes” based on their migration timing. For example, the Chinook salmon (Oncorhynchus tshawytscha) that migrate back to freshwater earlier in the year and oversummer in rivers before spawning are labelled either “winter-run” or “spring-run,” whereas those that arrive in rivers after summer are deemed “fall-run” or “late-fall-run.” By examining the DNA of early and late arriving Chinook, scientists have made a remarkable discovery about the relationship between these two ecotypes, recently published in the journal Science (Thompson et al. 2020). As it turns out, they may not be as separate as historically believed, which may be good news for the recovery of imperiled Chinook populations.

California’s Chinook salmon are renowned for the diversity of their life histories, with four migratory ecotypes – winter, spring, fall, and late-fall – occurring in the Sacramento River Basin alone. In addition to their different movement timing, early migrants exhibit physical differences from their late-migrating cousins, generally being smaller in size, higher in fat content, and more rapidly maturing. These differences, along with the fact that early migrants historically spawned in more upstream habitats, have led many to consider them a distinct fish. In some fish species, regions of the genome are associated with distinct migratory behaviors. One such region in the Chinook genome containing two protein-coding genes was recently discovered to be consistently linked with run-timing. Because the distinct migratory patterns of Chinook have led to the fish displaying differences in size and other key traits, it has been theorized that early and late migrants do not reproduce with one another.

To assess this, the study authors sequenced the genomes of 160 Chinook representing all ecotypes in the Klamath and Sacramento basins. Comparison of 64 fall-run and 64 spring-run fish found consistent differences in only one very small portion of the genome, termed the “region of strongest association,” or RoSA. Variation in the RoSA was found to clearly indicate two lineages: early (E) and late (L). Chinook in the Sacramento Basin exhibited a further split within each lineage, dividing the E lineage into winter- and spring-runs and the L lineage into fall- and late-fall-runs. Within the RoSA, several single nucleotide polymorphisms (SNPs, or a single DNA base pair that varies among the genomes of different individuals) showed a near-perfect association with the early and late migrating ecotypes. Because each Chinook receives chromosomes from both its parents, any given individual can possess either two copies of the variation associated with early migration (EE), two copies associated with late migration (LL), or one of each (EL). Using these diagnostic SNPs, the researchers determined the genotype of 502 adult Chinook harvested by the Yurok Tribe in the Klamath River Estuary. They then compared this migratory genotype with the fish’s fat content, reproductive maturity, and the date the fish entered the river.

Dates of freshwater entry were found to be almost completely separate for fish with EE and LL or “homogenous” genotypes. However, individuals possessing a mixed, or “heterozygous” genotype (EL) were found to have dates of entry falling between and overlapping with the timing of the EE and LL fish. By expanding their analysis to include the carcasses of 183 post-spawn Chinook from Coastal Oregon to the Sacramento Basin, the researchers found that the different ecotypes occurred in the same areas at the same times. This finding, alongside the presence of heterozygous (EL) individuals, suggests that early and late migrants do interbreed, and that gene flow between the different ecotypes maintains genetic diversity and the adaptability of the population. Importantly, the findings of this study are good news for the prospects of recovering the spring-run ecotype in the Klamath Basin following the impending removal of four major dams. Spring-run Chinook historically relied on cool, high elevation streams to survive over the summer, and were severely impacted by the construction of dams that cut off access to the upper watershed. However, the genes associated with the early migrant lineage still persist in the population, making it probable that an early-run ecotype will reemerge once suitable habitat becomes available. As much as humans are tempted to neatly file different salmon runs under distinct categories, this study suggests that the concept of salmon populations may warrant a more inclusive approach for the purposes of management.