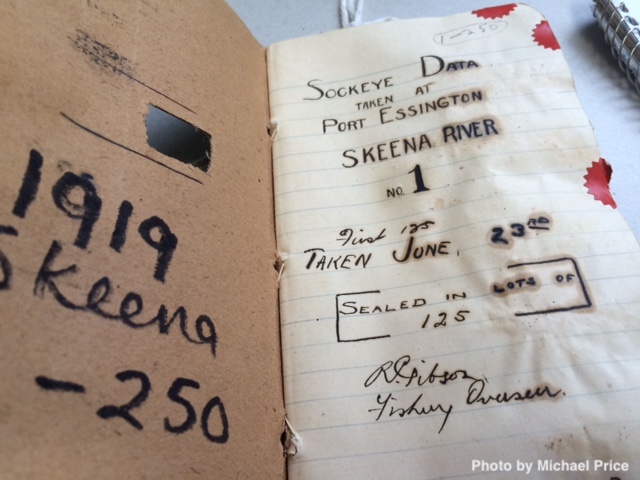 If Antiques Roadshow is any indication, forgotten treasures have a tendency to turn up in unassuming boxes stashed away in damp basements and dusty attics. In most cases, these rediscovered riches aren’t coated in century-old fish slime – but even those that are can prove priceless. The Skeena River is the second largest salmon watershed in Canada, and sockeye (Oncorhynchus nerka) populations that spawn there have been a valuable resource for indigenous peoples for many centuries. Skeena sockeye first became the target of a commercial fishery in 1877, which expanded to a 15-cannery, million-fish-a-year operation by 1920. Even for well-studied species like salmon, researchers rarely have historical information to extend their understanding more than a few decades into the past. Skeena sockeye population data are available from the 1960s onward, but the first 80 years of the fishery represent an unknown black box. However, genetic analysis of a historic collection of fish scales has allowed scientists to begin to fill in this gap, which has brought new understanding of sockeye abundance in the system and the alarming legacy of this valuable fishery (Price et al 2019).

In 1912, pioneering ichthyologist Charles Gilbert turned his famously thorough attention to the Pacific salmon of British Columbia. The first to use scales to determine the age of Oncorhynchus species, Gilbert began meticulously gathering samples and data from sockeye captured in the then young commercial fishery on the Skeena River. At that time, salmon were caught by linen gill nets deployed from small oar- and sail-powered vessels. Gilbert and his crew would measure, weigh, sex, and collect scales from 250 fish per week during the fishing season, which ran from the end of June until mid-August. Because this was a mixed-stock fishery, Gilbert’s sampling included individuals from a variety of populations in the region. For about fifty years, the hundreds of field notebooks containing scales and data painstakingly recorded in elegant longhand were lost to science. 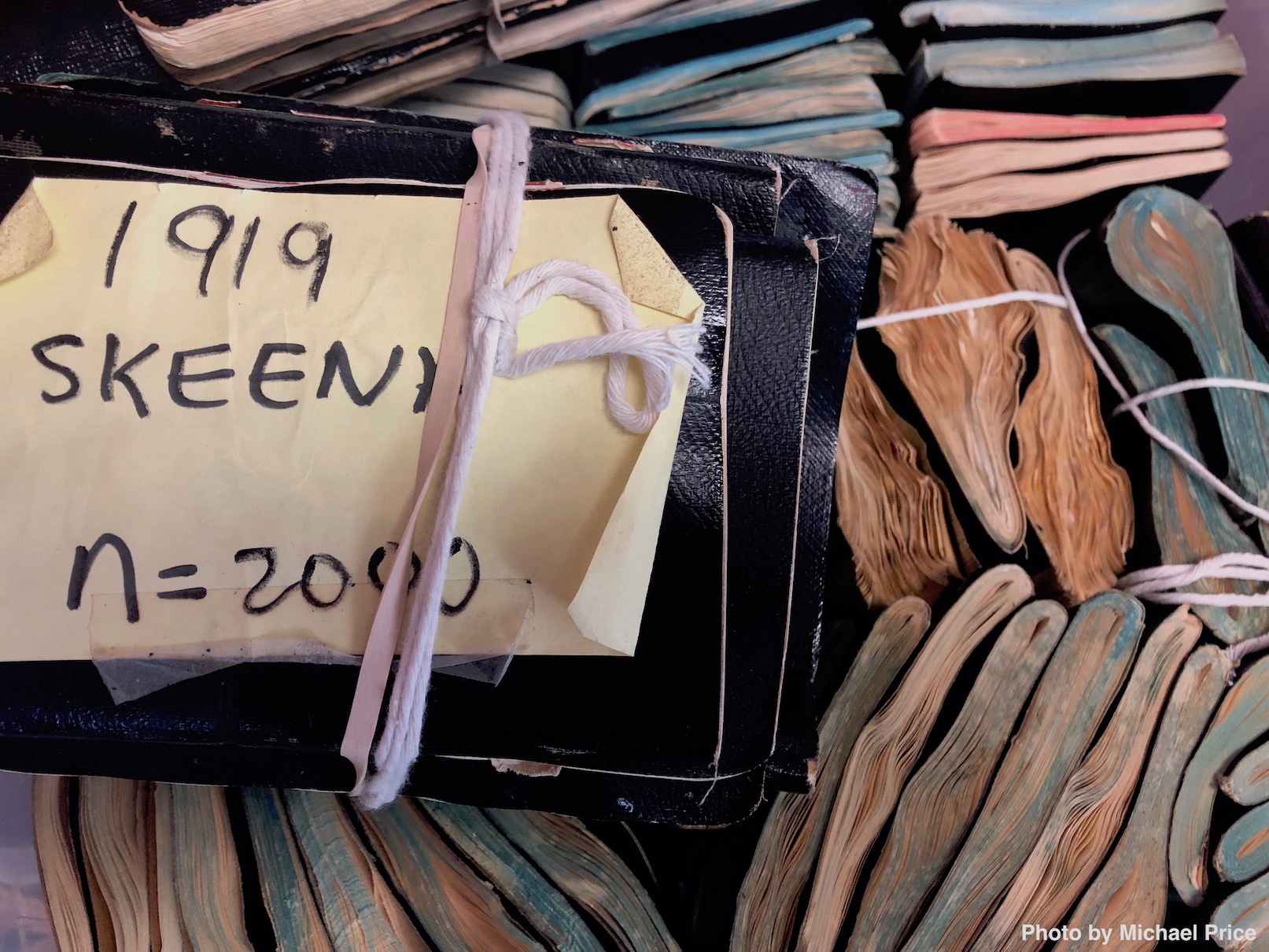 Fortunately, recent rediscovery of the collection led scientists to undertake a remarkable genetics study to open a window into the past. The researchers genotyped over 3,000 of the scales using microsatellites, which are repeated patterns of nucleotide base pairs that occur throughout the genome. Since microsatellites vary over time mainly due to fluctuations in the size and connectivity of populations, they are particularly useful for making inferences about abundance and population structure. A century-long internment in a basement meant that much of the DNA contained in these scales was heavily degraded, and slightly less than 70% could ultimately be assigned to a population. The majority were found to have come from the Skeena, within which 13 populations were identified. Reconstruction of the abundance of sockeye in each of these populations relied on data from Fisheries and Oceans Canada dating back to the 1960s, as well as data from recent years on weekly proportions of returning adults. The analysis indicated that all 13 Skeena populations of sockeye have decreased precipitously over the past 100 years, with declines ranging from 55 to 99%.

Overall, the mean abundance of adults returning to the Skeena has plummeted from 1.78 million a century ago to just 469,000 in recent years – a 75% drop. Importantly, comparison of current abundance with estimates based on the 1960s data incorrectly detects declines in only seven populations, when in fact all 13 have declined. This is what is referred to by ecologists as a “shifting baseline,” meaning the historic abundances managers are seeking to restore may themselves represent what was already a degraded state. The researchers also used models to determine which factors contributed to the declines that have taken place. Size-selectivity of the nets used in the fishery was found to be the most significant, having caused greater declines in populations with fish of above-average size. Declines were also found to be greater in populations made up of older (late-maturing) fish, and in populations that had to undertake longer migrations to reach their spawning grounds. 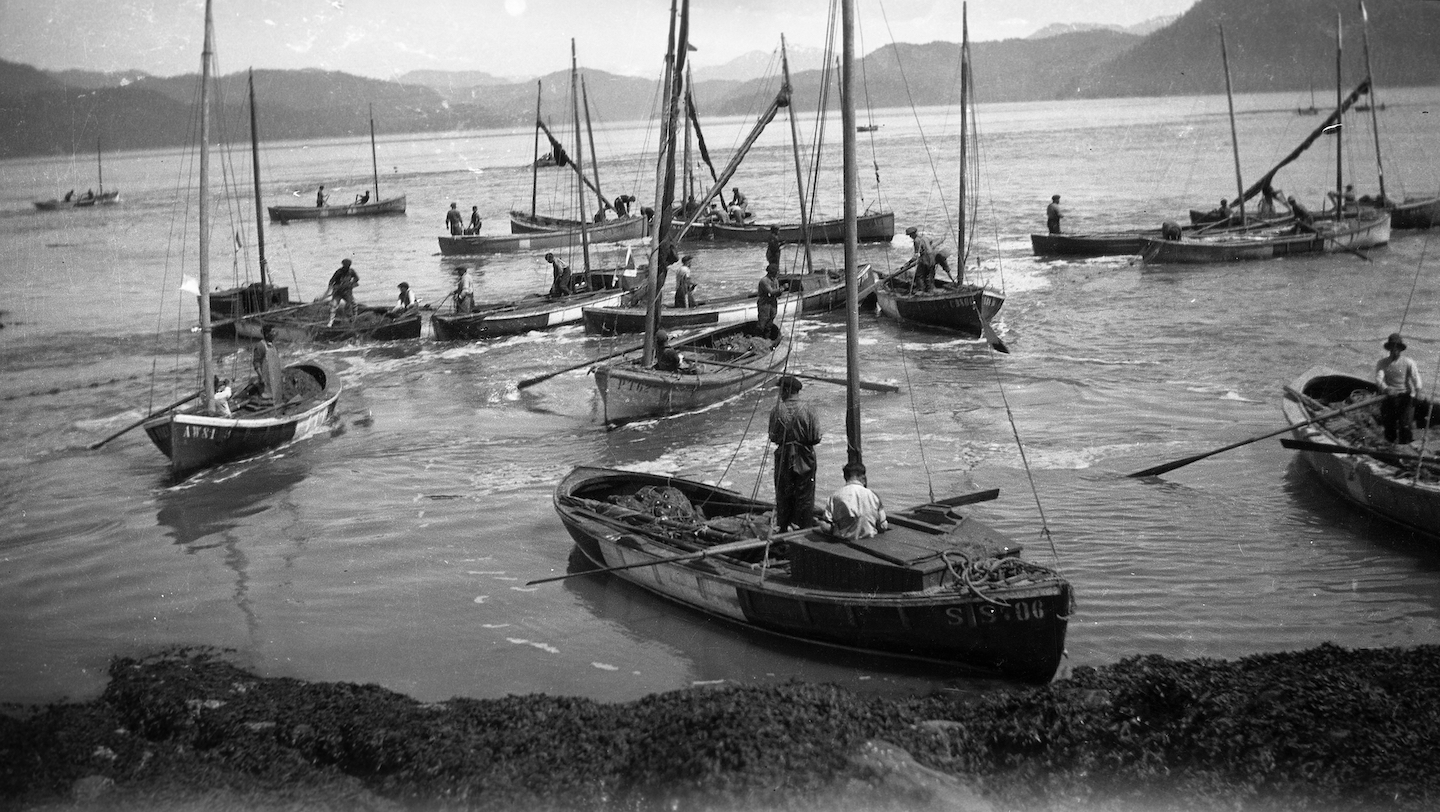 Analysis of these once-forgotten fishy notebooks has helped to expand scientific perspective to a time when the commercial fishery was only just beginning. But as is always the case in fisheries research, there is still more work to be done. Analysis of samples and data from the 1930s and ’40s will continue to fill in knowledge gaps, and the discovery of 1,200-year-old salmon bones in the region may allow scientists to estimate patterns in population abundance from the very distant past. Restoring salmon populations to historic levels is an important effort due to the many negative consequences of declines, including reduced nutrient input to river ecosystems, reductions in population adaptability to change, and decreases in important food resources. Only with an accurate understanding of the past is it possible to appropriately manage for the future.