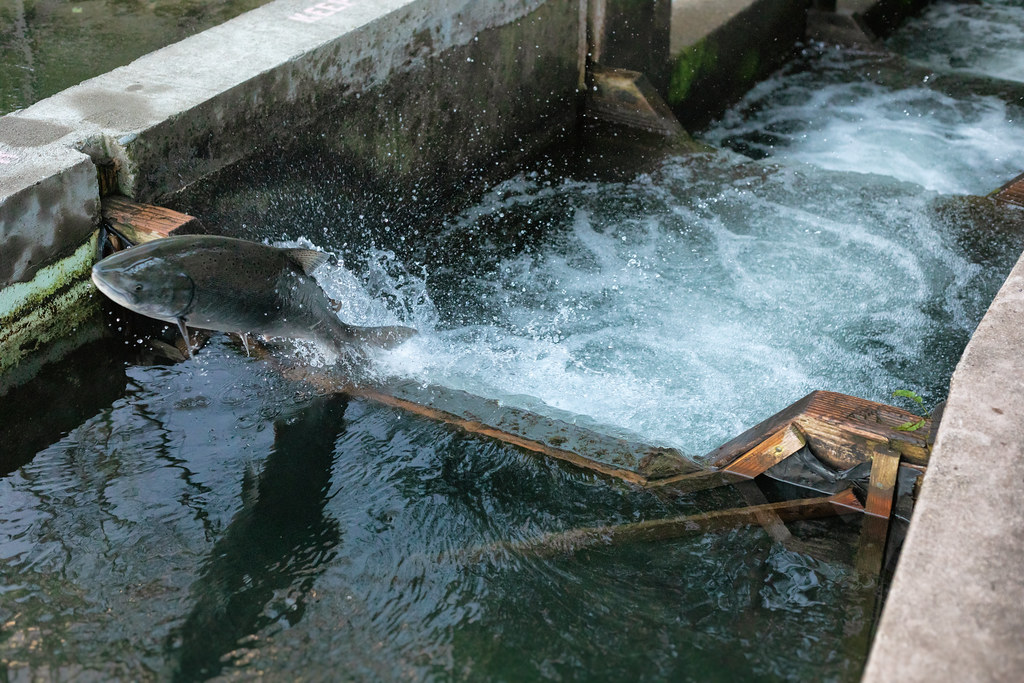 Climate change is turning up the water temperature along migration paths used by anadromous fish species such as Chinook salmon. In a study published in the journal Global Change Biology, researchers predicted the effects of future stream temperatures on Chinook salmon populations (Fitzgerald et al. 2020). They did this by modeling temperature changes in stream networks used for migration and assessed the effects on different life stages of salmon populations with different migration run timings. Their analysis showed that run timing makes a bigger difference than geographic location on how these salmon will be affected by the increasing heat. In particular, fall-run salmon appeared less impacted by thermal stress compared to spring-, winter-, and late-summer run Chinook salmon. In addition, access to cooler historical habitats currently blocked by dams could help mitigate the stress of warming temperatures on these fish.

This study created a model to predict future temperature changes during each month for a network of 465,775 km of rivers traveled by Chinook salmon throughout the western United States. The researchers evaluated the potential for fish to experience thermal stress based on historical climate conditions, as well as projected temperature increases of 1oC and 2oC, during four freshwater stages of the Chinook salmon life cycle: adult migration, holding, incubation, and early rearing. These life stages occur throughout different salmon habitats within the stream network during different seasons, and thus will experience different temperatures. Thermal stress was defined as experiencing temperatures higher than critical thresholds determined by the Environmental Protection Agency for each life stage, including 20oC for adult migration, 16oC for adults holding prior to spawning, 13oC for spawning, egg incubation, and emerging juveniles, and 16oC for rearing juveniles. The study also looked at temperatures in historical salmon habitats that are now blocked by dams.

The results showed that different phenologies, or seasonal run timings, will experience different amounts of thermal stress. Fish that migrate early in the year as adults, such as spring-run and winter-run, as well as some summer-run, spend more time in the stream during the summer when temperatures are hottest, and therefore experience thermal stress more drastically than fall-run salmon. Fall-run timing allows Chinook salmon to avoid using the streams during peak warming, and the fish primarily experience thermal stress during adult migration. In contrast, spring-run experienced high thermal stress during adult holding periods and egg incubation, and winter-run salmon were consistently stressed under all scenarios. The study also found that streams blocked by dams have cooler water temperatures than habitat below dams, and temperatures did not exceed EPA criteria for almost all runs above dams, even under warmer climate scenarios.

As global temperatures rise and thermal exposure increases for freshwater species, it will become vital to predict effects on populations and their ecosystems in order to help potentially mitigate the impacts. Thermal stress leading to mortality before spawning could lead to the loss of early-arriving fish and their genetic and phenotypic diversity. Fall-run migrations may be the most viable with changing climate conditions, but loss of diversity makes the species less resilient as a whole. Chinook salmon may have the potential to adapt by making slight changes in the timing of their migrations, but this could lead to overlap between spring- and fall-runs in streams, and resulting loss of diversity through hybridization. This study’s results can also be used to predict habitats that will be more suitable for Chinook salmon as temperatures rise. While dams currently block access to naturally occurring cooler waters, fish ladders and other infrastructure that allow salmon to reach these habitats could help them avoid thermal stress. Overall, species such as Chinook salmon that exhibit a variety of seasonal timings in their life cycle events and are spread over a diversity of locations will have differing responses to the effects of climate change, and management strategies must account for this diversity.

This story was written by Nicholas Seyfried for an internship with FISHBIO through the UC Santa Cruz Environmental Studies Department. It featured in our weekly e-newsletter, the Fish Report. You can subscribe to the Fish Report here.