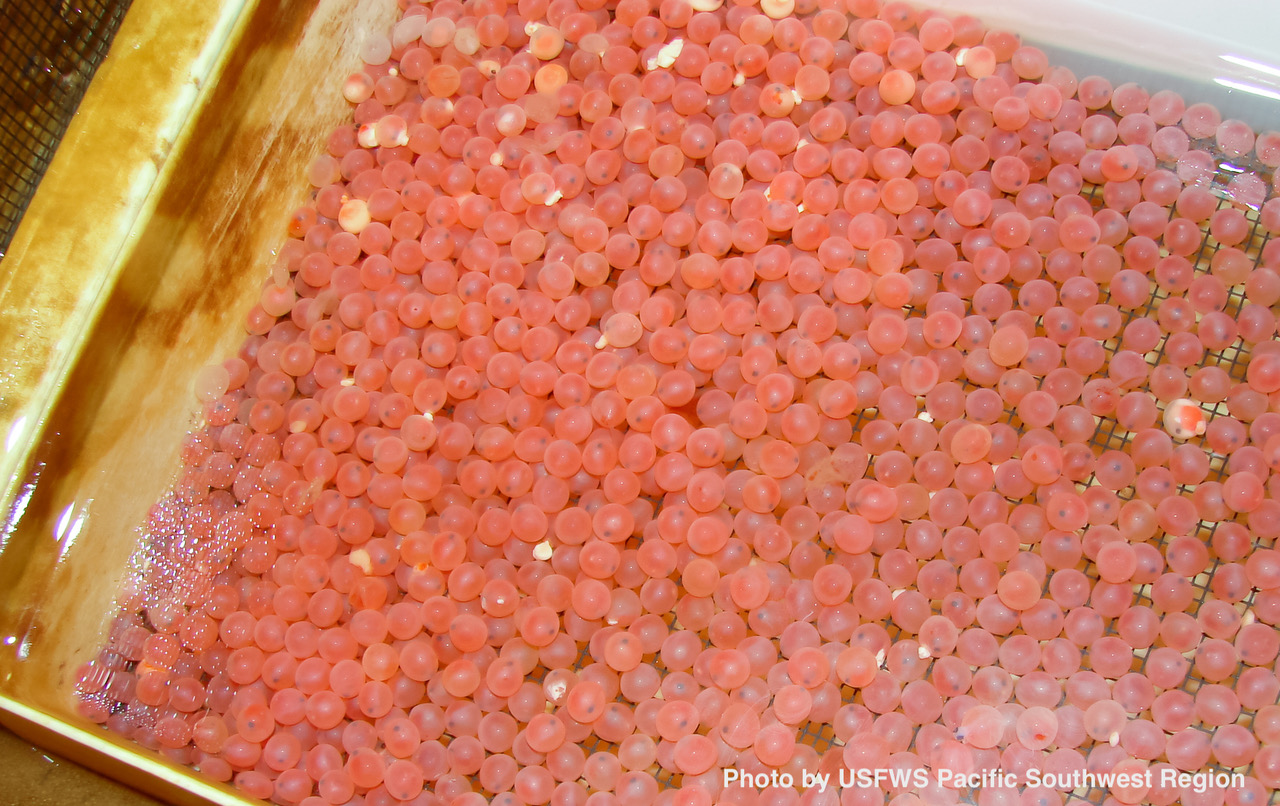 Of the four runs of Chinook salmon that inhabit the Central Valley, winter-run historically had the most daunting journey to reach their spawning grounds. These cold-loving fish traveled the farthest upstream to spawn in the chilly headwaters of the Sacramento Basin. The construction of dams throughout the watershed over the course of the past century, however, has cut winter-run off from the majority of their historic spawning areas. Today the run is listed as endangered under the Endangered Species Act, and exists only as a single population in the upper Sacramento River that depends on cold water released from Keswick Dam. Winter-run Chinook’s need for cool temperatures has meant recent catastrophic losses when temperatures got too high, but a few recent studies have altered our  understanding of this species’ temperature tolerance. This new knowledge may allow water managers to actually release less cold water overall, while still improving winter-run survival.

Cold water released from Shasta Reservoir is used to control water temperatures during the summer months in the mainstem Sacramento River below Keswick Dam. Managers plan releases of the reservoir’s cold-water pool to maintain suitable stream temperatures for winter-run spawning, egg incubation, and juvenile rearing. Depletion of this pool limits their ability to ensure temperatures stay within suitable ranges. In three consecutive egg incubation seasons during the recent drought (2013–2015), newly hatched salmon experienced unprecedented high water temperatures, leading to an estimated 95% loss of the 2014 and 2015 year classes. The protected status of winter-run makes field experimentation difficult, so models of their thermal tolerance are largely based on laboratory data. However, conditions can differ considerably between the laboratory and the river. Researchers at UC Santa Cruz and NOAA Fisheries found the laboratory-based survival model used by agencies between 2012 and 2016 overestimated the lethal temperature for eggs by approximately 3°C (Marin et al. 2016). They revised the survival models, which provided further support that the historically low numbers of  winter-run juveniles observed at Red Bluff Diversion Dam were due to high temperatures during egg incubation.

The differences in estimated survival rates between laboratory- and field-based models was due to a misunderstanding of how warm water temperatures damage salmon eggs. At temperatures close to the upper thermal limit of eggs, mortality typically occurs due to lack of oxygen rather than from physical damage. However, elevated water flow velocities during lab experiments delivered an artificially high amount of oxygen to eggs that they would not have received under normal field conditions. Because of the higher oxygen exposure, laboratory-based models overestimated the thermal tolerance of salmon eggs. Based on this revelation, NOAA Fisheries submitted a proposed amendment to the Biological Opinion for salmon management that better links temperature management to the refined estimates of thermal tolerance. This amendment stipulates that the U.S. Bureau of Reclamation maintain stream temperatures below Keswick Dam at or below a compliance temperature determined by the model from May 15 to October 31 each year. The compliance temperature would be adjusted depending on water-year designation (higher in dry years, lower in wet years), understanding that temperature regulation depends on conserving the cold-water pool in Shasta Reservoir.

Following the amendment to the Biological Opinion, a University of Washington researcher examined how the new model predicted salmon survival under various theoretical reservoir operations (Anderson 2018). He tested additional models with more parameters, including temperature-related mortality at different ages, and density-dependent mortality (or death related to overcrowding). The study found that by using a model including these factors, managers could use less of the cold-water pool to regulate temperatures. The model accomplishes this by assuming that hatching occurs approximately halfway through the spawning season, and basing the timeframe of temperature compliance around this event. This reduces the compliance timeframe from five months (based on the NOAA Fisheries model) to as few as three months. Salmon alevins require less oxygen than eggs, so managing cold water is only necessary until all eggs have hatched.

This new model also offers some interesting insights into managing during critically dry and very wet years. For instance, during dry years the author suggests raising stream temperatures in the period right before spawning begins to encourage fish to spawn closer to Keswick Dam. This would reduce the length of stream that requires temperature regulation, and reduce the amount of cold water needed for releases. In wet years, the author suggests lowering pre-spawn stream temperatures to allow spawning salmon to spread out, reducing density-dependent mortality. Further testing of these models may expand the range of options available for conserving endangered winter-run.